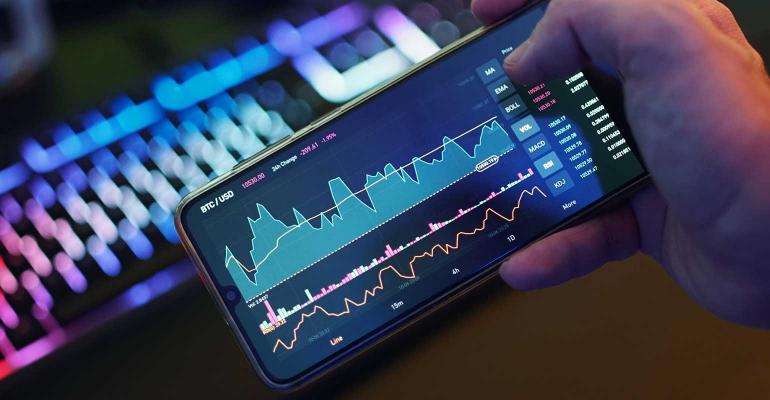 ‘It Could Destroy Your Life’: Crypto Trading Goes to Rehab

(Bloomberg) -- The old cravings sometimes creep up on Stevie Rojas and work on his nerves and start to hijack his brain. But he says that he’s kicked the habit — that he’s quit cryptocurrencies cold turkey. A lot of people get into crypto. Rojas did, and more: He says he got hooked on it. Rojas is an entrepreneur in his early 30s, and he began experimenting with cryptocurrencies for all the usual reasons: boredom, curiosity, fear of missing out. He started with Bitcoin and discovered he liked the rush. He progressed to Ethereum and then to more exotic tokens — ones with bigger risks and bigger thrills.

He says he spent hours a day hunting for digital treasure on his smartphone. The ups made his pulse quicken. The downs left him strung-out. He says he gave up morning prayers and time with his baby daughter. He scrolled Reddit and chased the action instead. If he wasn’t trading crypto, he was thinking about trading crypto.

And so one day last year Rojas knelt in the darkened confessional of a Roman Catholic church in Manila, where he lives. He broke down and prayed for help.

Are you gambling? the priest asked.

Is it really possible to be addicted to cryptocurrency? The idea is contentious, but it isn’t far-fetched — particularly to the lucrative addiction-treatment industry. From a $90,000-a-week Swiss clinic to relatively inexpensive teletherapies, crypto, of all things, has come to rehab.

The development is, admittedly, a footnote to the grim story of addiction today. Only a tiny fraction of people who dabble in things like Bitcoin will ever face problems. And the precise clinical nomenclature is up for debate.

But both scientific understanding and popular viewpoints are shifting. Psychiatrists lately have been zeroing in on addictive disorders involving behaviors. “Gambling disorder” was only officially recognized a behavioral addiction by the U.S. medical community in the past decade (“pathological gambling,” recognized earlier, was considered an impulse-control problem). The latest edition of the American Psychiatric Association manual, sometimes referred to as the bible of psychiatry, lists an excessive preoccupation with online video games as deserving of more research.

And now a growing number of mental-health professionals are adding an asterisk to the guides to designate cryptocurrencies as a trouble spot akin to gambling, and in some ways more insidious.

Scientists have long suspected what Wall Street has always known: Our brains lust after money. The high from cocaine, the thrill of buying Dogecoin: the same reward circuits govern both. Researchers have even linked an elongated version of one neural receptor, dopamine receptor No. 4, to a tendency toward financial risk-taking.

Whatever the formal label, the problems people like Rojas have experienced reflect the convergence of powerful cultural forces. Much has been said of the supposedly addictive qualities of Robinhood, the free-trading app that’s lured millions of amateur day-traders to racy meme stocks. Many experts have drawn comparisons to gambling disorder. Underlying problems like depression or substance abuse, experts say, often make these situations worse.

Three things set cryptocurrencies apart, however. The first is novelty. Even now, 14 years after Bitcoin supposedly was invented by the mysterious person or persons known as Satoshi Nakamoto, crypto still feels like a new-new thing. The second is volatility and, with it, the dopamine-rush thrills of highwire trading.

And then there is a third, and a big one. Despite the craziness that can prevail on the fringes of crypto, established tokens have taken on the air of legitimate investments. That makes it easier for people to rationalize speculative bets that, in some cases, are little more than a throw of the dice. Plus, crypto-trading plays out globally, 24/7, with the swipe of a smartphone or the click of a mouse.

Experts say all of this can be a recipe for trouble.

“It’s very similar to being at a roulette table,” says Dylan Kerr, an online therapist in Thailand who has treated about 15 self-professed crypto addicts and accepts payment in cryptocurrency. “It’s seemingly never ending, and it demands your attention,’’ Kerr says of crypto-trading. “If you take your eyes off the prize, you could miss out on massive opportunities and incur massive penalties.”

Says Lia Nower, director of the Center for Gambling Studies at Rutgers University: “Excessive crypto trading and high-risk stock trading could be forms of gambling and lead to gambling disorder.”

The $90,000-a-week view stretches across Lake Zurich to the snow-peaked Alps beyond. Here at the luxury Paracelsus Recovery clinic, a range of mental suffering is discretely treated in velvet-rope style. Amenities include butlers, personal chefs, chauffeured limousines and more.

To Gerber and his psychiatrists, compulsive crypto-trading looks a lot like compulsive online gambling. But in some ways, they say, crypto can be even more treacherous. Many people view trading crypto-trading as a form of investing, which confers a certain respectability. Inquiries about crypto problems are up 300% between 2018 and 2021, Gerber says.

“You do it to get the feeling, the rush,” Beck says. “And you have to repeat it again and again, to get more of the rush.”

He goes on: “And it's amazing. These are very intelligent people, but they stop thinking straight. They know enough about statistics to understand that the chance that they will win back is really small, but they still believe it, and the more they lose, the more they want to play or buy.’’

A thousand miles away, in Scotland, specialists at another private clinic, Castle Craig, are seeing similar trends. Anthony Marini, a senior specialist therapist there, says Castle Craig has treated over 100 people with cryptocurrency problems since 2016. Some arrive to cope with alcohol or drug use, and crypto problems are only unearthed later.

Marini uses a 12-step plan akin to Alcoholics Anonymous. His work focuses on understanding what he calls the “crypto curve,” the arc from “highly fulfilling” trading to dependency, and then to painful realizations that can bring on feelings of isolation, helplessness, depression or secondary addictions. The path to recovery here includes an exploration of the self and spirituality, gradual tempering of usage, a search for healthier fulfillment and ultimately the rebuilding of routines and relationships.

Steven Elphinstone came to Castle Craig for a variety of reasons. Elphinstone, 50, was working as a tunnel miner in London when he got into spread betting, a speculative derivatives strategy that’s banned in the United States. He started trading crypto early, around 2015, and promised himself he’d become a Bitcoin millionaire.

Back then, Bitcoin was trading around $240, and he says he was buying four or five tokens a week. Elphinstone spent hours poring over charts at his home on the Shetland Islands, where he’d relocated while rebuilding his mother’s house.

He says he loved the high of a trade gone right. But the losses were thrilling, too. He says he also struggled with other addictions. Cocaine was a big one. He sank all of his earnings into the crypto market or crack binges. He felt as if he could swap the two habits.

He hit the bottom after realizing that, deep down, maybe he didn’t really want to be rich after all. He’d trade his way up from maybe 1,000 pounds ($1,353) to 100,000 pounds, and then lose it all. He’d go into debt, grow angry and resentful, and see the pattern repeat itself again and again.

At Castle Craig, his days are filled with reading, lectures and even penmanship, which is supposed to build a sense of routine. Part of his treatment has involved speaking with the media, including Bloomberg News, about his experiences. He still fixates on Bitcoin charts.

“I’m in mourning,” Elphinstone says. “It’s like I have this overwhelming feeling that I’ve lost the most special friend I’ve ever had in my life.”

Back in Manila, Stevie Rojas says he’s found strength in his faith. After he left the confessional, he quit trading cold. He sold all his crypto. He uninstalled all his apps. He went back to Reddit, only this time to a forum where posters poke fun at crypto, rather than promote it.

“It’s like any other addiction,” Rojas says. “It could destroy your life if you don’t take care of it.”