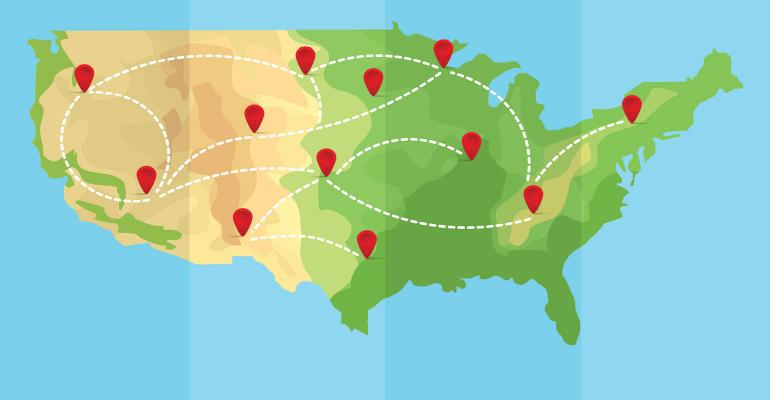 Real estate fund sponsors are lining up to capture private equity poised to flow into new Opportunity Zones created by the Tax Cut and Jobs Act.

The basic premise behind the Opportunity Zones initiative was to offer incentives in the form of deferred and reduced taxes on capital gains to attract private capital for investment in low-income urban, suburban and rural areas of the country. “The simple thought was that if capital was invested in those zones, it would have an appreciable and beneficial effect on those communities,” says John W. Gahan III, an attorney in the real estate department at Sullivan & Worcester in Boston.

What is stirring excitement among both sponsors and investors is that, unlike 1031 tax deferred exchanges, this tax incentive is not just for “like-kind” assets. It allows investors who are selling a variety of assets, such as stocks, art or a business, to reinvest capital gains in Opportunity Zone funds. Some industry estimates put the value of total unrealized gains in the U.S. in the trillions. So, even if a fraction of those dollars finds their way into Opportunity Zone property funds, it has the potential to create a sizable new sector within the real estate investment market.

The legislation has already unleashed considerable activity with companies that are now starting to establish funds, raise capital and target potential investment opportunities in the more than 8,700 certified Opportunities Zones that have been established in the U.S., Puerto Rico and U.S. Virgin Islands. “I’ve seen estimates anywhere from $30 billion to $100 billion in potential activity in commercial real estate related to these Opportunity Zone funds,” says Paul Fiorilla, director of research at Yardi Systems in New York. “So it is definitely something that has attracted a lot of attention in the market,” he says.

Earlier this summer, Virtua Partners was one of the first funds out of the gate with the introduction of its Opportunity Zone Fund I that launched in June. The fund has a target capital raise of $200 million, which it is raising primarily from accredited investors, high-net-worth individuals, family offices and other qualified purchasers.

Another one of the early funds already putting money to work is Fundrise. The company launched its Fundrise Opportunity Fund LP in August, targeting investment in office and mixed-use properties in Opportunity Zones around the country. The company has set a target fundraising goal of $500 million. “I think Opportunity Zones have the potential to be one of the most transformative tax incentives or government development programs in decades in the U.S.,” says Benjamin Miller, CEO of Fundrise.

To date, the Fundrise Opportunity Fund has acquired two assets—a creative office property in East Los Angeles and a mixed-use property in the LeDroit Park neighborhood of Washington, D.C. The LeDroit Park property, for example, is an apartment building with ground floor retail space that has been vacant for the past 20 years. Fundrise intends to raise the value of the property by renovating and expanding it. When people in the local neighborhood heard that Fundrise had acquired the property, there was an outpouring of support and excitement, says Miller. “That’s an example of building or renovating something in a neighborhood where they want to see that improvement,” he says.

Investor interest has been staggering, adds Genovese. He says that the tax benefits of Opportunity Zones will be the catalyst  to entice investors to pull the trigger and sell well-appreciated assets in order to move their investments from paper gains, with potentially higher risk of a downturn in value, into an investment with possibly less risk, more diversification and better tax advantages.

However, Genovese also cautions that not all Opportunity Zones are the same. “In my opinion, each investment must stand on its own before the Opportunity Zone benefits should be considered. At the end of the day, the success or failure of the investment is what will matter most, and then opportunity zone benefits can be the cherry on top, so to speak,” he says.

There is buzz and interest from investors, but at the same time there are also a lot of questions and a big education component in communicating Opportunity Zone regulations and how the tax advantages work.

Investors who reinvest capital gains from the sale of an asset into a qualifying Opportunity Zone fund within 180 days of the sale can defer and potentially reduce their capital gains taxes until they sell out of that fund or on the set date of Dec. 31, 2026—whichever comes first. The new tax law provides an added incentive for shareholders to reduce the amount of their taxable capital gains for longer-term investment holds.

Cities also are positioning themselves to capture some of the investment dollars flowing to Opportunity Zones. For example, the city of Louisville launched an interactive map in July that shows boundaries of the city’s 19 designated Opportunity Zones and allows investors to search for specific addresses.

However, there are very technical rules that apply as to what properties within Opportunity Zones will qualify as legitimate targets. For example, those properties that are excluded run the gamut from country clubs to casinos and strip clubs.

Since releasing its list of certified Opportunity Zones, the Treasury Department has been inundated with questions to clarify some of the finer details of the statute. “People who are investing lots of money want to make sure they understand what the rules of the road are,” says Gahan. Likewise, sponsors creating funds also want to make sure they are structuring funds correctly. Some funds have moved forward, but the majority are in a holding pattern, waiting for more guidance before they move forward. The Treasury Department has issued some responses to FAQs and is expected to release additional details this month.

“So, the deployment of all the money that is available to be used in Opportunity Zones has not really happened yet,” says Gahan. However, when the Treasury Department does come out with further guidance or regulations, it is likely that the trickle of investment capital that has started flowing to Opportunity Zones will turn into an open spigot, he adds.