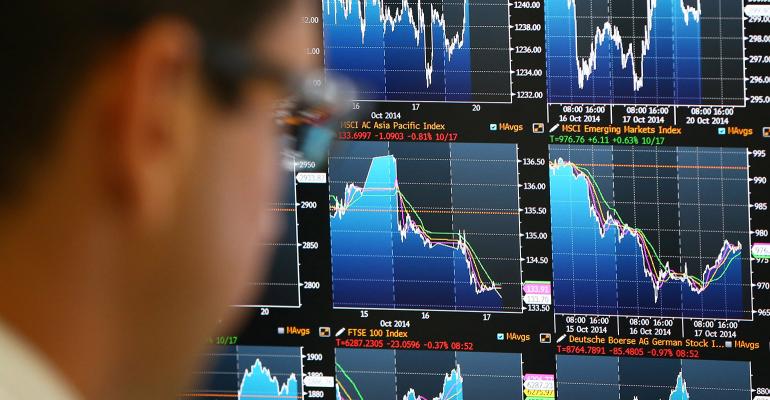 This Is How Leverage in the Financial System Lives On

(Bloomberg) -- Rumors of leverage's death have been greatly exaggerated.

In the aftermath of the 2008 financial crisis an abundance of leverage — borrowed money used to amplify returns — was blamed for exacerbating losses on subprime mortgages and contaminating the banking system with catastrophic results. Since then a host of new rules have been enacted to reduce financial leverage, including penalizing certain derivatives positions, such as the credit default swaps (CDS) villainized in the crisis, as well as outright curbing the amount of borrowing allowed at big banks.

While such efforts have made substantial steps in derisking the financial system — especially at large lenders — they've also encouraged the creation of new types of leverage and its migration to different players. Today, much leverage appears to sit on the balance sheets of large and small investors, often fueled by the need to generate returns amidst ultra-low interest rates and high correlations that see asset classes move together and make it more difficult to produce outperformance, known as 'alpha.'

Leveraged strategies may include selling volatility or dabbling in derivatives tied to interest rates or corporate credit. While few are suggesting that the leverage deployed via such tactics could cause a crisis on the scale of 2008, it can create unexpected consequences ranging from a 'flash crash' in one of the world's most liquid markets to constraints on the Federal Reserve's ability to change monetary policy, as underscored by a new paper from visiting professors at the Bank for International Settlements.

Moreover, they underscore the risks facing the market as investors continue to divide themselves between those eschewing the chance to earn a steady stream of returns by betting big — and those willing to risk the chance of outsized losses in the event of a significant change in markets.

The latter group found a posterchild in the way of Bill Gross, the former co-chief investment officer of Pacific Investment Management Co. (Pimco) and erstwhile 'Bond King' who spoke publicly about his use of derivatives to increase returns in the "new neutral" era of ultra-low interest rates, shortly before departing the company in late 2014.

Pimco's flagship bond fund, the Total Return Fund (TRF), sold $94 billion worth of put and call options on floating to fixed income swaps, or 41 percent of the fund's net asset value, according to BIS data. Known as selling or shorting volatility, the strategy allowed Pimco to collect insurance-like premiums as long as interest rates stayed low.

Similarly, Pimco deployed eurodollar futures, a type of derivative that locks-in interest rates for investors, with long eurodollar contracts at the Total Return Fund (TRF) jumping from 250,000 in March 2013 to almost 1.2 million as of June 2014.

While Pimco noted at the time that such long eurodollar futures contracts were "used to manage exposures at the short end of the yield curve and express PIMCO’s expectations for short-term rates," they also come with the benefit of added leverage, in effect boosting returns so long as rates remained low.

Gross's departure from the fund in September 2014 sent the TRF's managers scrambling to liquidate the eurodollar contracts as investors redeemed their money. The liquidation may have exacerbated the flash rally in U.S. Treasuries that took place shortly after, when the yield on the benchmark 10-year note seesawed wildly in the space of a few minutes, the BIS paper said.

"The irony is that a more measured pace of liquidation would have allowed the fund to profit from the bond market 'flash rally' of October 15, 2014," visiting BIS professors Lawrence Kreicher and Robert McCauley wrote in the paper. "In any case, it appears that a huge long eurodollar position could be and was liquidated in a fortnight. By contrast, [the TRF's] liquidation of its 'short volatility' position may have contributed to the 'flash rally,'" by setting off a wave of hedging amongst dealers who scrambled to absorb Pimco's short position.

The use of eurodollar futures has not been confined to the world's erstwhile biggest bond fund, with the BIS paper noting that while asset managers play a diminished role in day-to-day trading, they "generally hold the largest eurodollar positions among buy-side participants." Their "dominance in positioning establishes them as gatekeepers for the Fed's forward guidance" limiting the U.S. central bank's ability to change monetary policy if asset managers are not positioned accordingly — as seen in the 2013 taper tantrum.

Investors seeking to boost returns at a time of abundant liquidity and unconventional monetary policy have also applied leverage to corporate credit, a market which has exploded in size thanks to low interest rates and yield-hungry investors who have enabled companies to sell more of their debt. While the use of single-name CDSs that offer insurance-like payouts to a single security, company, or government, has diminished in the wake of the financial crisis, trading tied to indexes comprised of multiple entities has jumped.

With corporate default rates at historic lows and with stimulus increasing correlation between asset classes, use of so-called CDS indexes has boomed as both a trading and hedging tool, allowing investors to create an "overlay" on their portfolios to protect against a systemic rise in defaults at a time when liquidity is said to have deteriorated.

Further complicating matters is the explosion in alternative derivatives or 'derivatives of derivatives,' with investors now served an expansive menu of exotic synthetic credit products including options on total return swaps (TRS) and options on CDS indexes.

Such 'swaptions,' as they're sometimes known, give investors the right to buy or sell the index at a particular date and for a certain price, and are said to have surged in popularity in recent years. Analysts at Citigroup Inc. estimated that about $24 billion of CDS index options traded in 2005, rising to $1.4 trillion in 2014 — a more than a 5,000 percent jump in activity in just under a decade.

Strategists at Barclays Plc have expressed concerns that the rapid rise in CDS index option volume was impacting the underlying index, while a senior credit trader at one of the biggest banks told Bloomberg earlier this year that the notional volume of credit index options traded has on some days surpassed the volume of trades in the referenced index. A more recent survey by Citigroup Inc. analysts earlier this year showed 72.6 percent of investors expressed concerned over how "investors are taking more leveraged risk using derivatives."

In the equity market, a jump in the number and amount of products tied to the Chicago Board Options Exchange's Volatility Index, the VIX, are sometimes said to be impacting the index itself. While the VIX, which is based on options contracts tied to the S&P 500, remains far below its financial crisis highs, volatility of the index itself last year reached an all-time record.