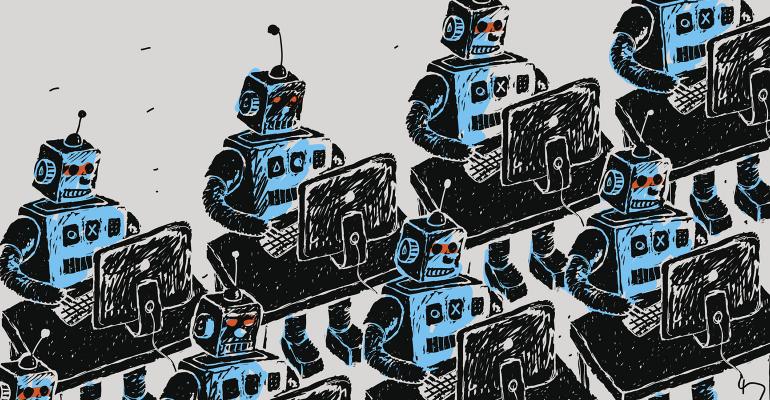 The same technology that enables Tesla's self-driving car and the Amazon Echo is being used mimic traders.

(Bloomberg) --Hedge funds have been trying to teach computers to think like traders for years.

Now, after many false dawns, an artificial intelligence technology called deep learning that loosely mimics the neurons in our brains is holding out promise for firms. WorldQuant is using it for small-scale trading, said a person with knowledge of the firm. Man AHL may soon begin betting with it too. Winton and Two Sigma are also getting into the brain game.

The quant firms hope this A.I. -- a kind of  machine learning on steroids -- will give them an edge in the escalating technological arms race in global finance. If they’re right, neural networks could help propel the transformation of finance, pitting machine against human and threatening old-school investing jobs. But today’s researchers are careful not to oversell the technology -- it’s just another potential arrow in their quiver -- after an earlier round of promotion and disappointment.

"Having witnessed in the 1990’s the hype and subsequent failure of hedge funds purporting to use neural networks, we tend to be skeptical of claims that ‘deep learning’ will solve the general problem of investment management,” Winton, the $31.5 billion quant firm in London, said in a statement.

Quant funds are following the lead of tech giants like Google, which have proved the mettle of deep learning. The technology, which needs super-powerful computers and troves of data to do its job, already enables Tesla Inc.’s self-driving cars and Amazon.com Inc.’s Echo, a voice-activated smart speaker. It’s about five years away from becoming a mainstream tool at hedge funds, said Nicolas Chapados, a computer scientist who collaborates with Professor Yoshua Bengio, a pioneer in deep learning.

“There’s a huge class of deep-learning models used in tech firms that can be adapted to financial processing,” said Chapados, who co-heads quant fund Chapados Couture Capital in Montreal and Element AI, a research firm that uses the technology.

Hedge funds lag in deploying deep learning because they lack expertise in applying it to complex financial data. Facebook Inc.’s image recognition -- the ability to identify a dog in a photo, for instance -- has succeeded because it draws on unlimited amounts of data, with fixed points like pixels, uploaded by social media users. Market data, on the other hand, is limited and constantly changing, making predictions of events like stock moves more challenging.

Deep learning loosely mimics activity in the multiple layers of neurons in our brains. Neurons are densely interconnected in complex ways, exchanging signals to other cells and forging new connections as we learn. The power of deep learning comes from a similar non-linear, multi-layered processing of data, which allows computers to build sophisticated concepts from basic ones.

Consider a quant searching for factors that might push a stock over a benchmark index. Today an analyst has to manually select factors like price-earnings ratios to test. A quant using deep learning gives the neural network a price target and then feeds the model with raw company and market data. The artificial neurons are math functions that crunch data. As it moves through layers, the neurons self-adjust -- or learn -- to get closer to the goal: finding factors that predict when the stock will hit the target.

Anthony Ledford, chief scientist at Man AHL in London, said his researchers have spent more than a year developing deep learning and the firm hopes to start live trading with it soon. The hedge fund has been allocating money to a machine-learning strategy.

“In deep learning, one doesn’t have to define the features in advance, deep learning aims to identify them for you,” said Ledford, whose unit of Man Group Plc manages about $18.3 billion. “We know a lot of potentially predictive features already given AHL’s three-decade history, so the real challenge is often shaping the methodology, data and computations so we discover new features, not the ones we know already, which is very challenging in itself.”

Winton is also experimenting with the technology. Two Sigma, the $40 billion quant hedge fund in New York, is hiring researchers for a new deep-learning team, according to its website. A spokeswoman for WorldQuant, which manages money for Millennium Management, declined to comment.

Academic researchers have found that deep learning can generate profits from wagers on corporate events like takeovers. In a 2015  study of the technology’s ability to predict moves of 15 stocks in the S&P 500 Index, more than 10 million events were pulled from financial news as part of the training of the computer system. In simulating trading of the stocks, the model made a cumulative profit, according to researchers led by Xiao Ding of the Harbin Institute of Technology’s Research Center for Social Computing and Information Retrieval in China.

Chapados, the computer scientist, said deep learning can also outperform its simpler cousin. Neural networks are more resilient than machine learning to overfitting, when a model is so closely tuned to training data that it fails to perform with live data.

In the war for talent with tech firms, hedge funds are struggling to hire scientists, which has slowed their pursuit of deep learning, said Chapados. Firms also may face a shortage of data in some markets.

“While deep learning techniques can work very well using millions, if not billions, of data points in currency and commodity markets that are correlated with each other, it is challenging to build a good model using only a thousand data points of single-stock daily data,” said Hitoshi Harada, co-founder of Alpaca, a startup that sells deep learning trading platforms to banks and other financial firms. He cited companies that have publicly traded for only a year as an example.

Winton researchers, despite the challenges, are pursuing deep learning, not as a revolutionary force but as a useful weapon.

“We do, however, believe that technology has advanced sufficiently over recent years to suggest such methods have the potential to improve elements of our process, and deep learning is an active area of long-term research for Winton," the hedge fund said.