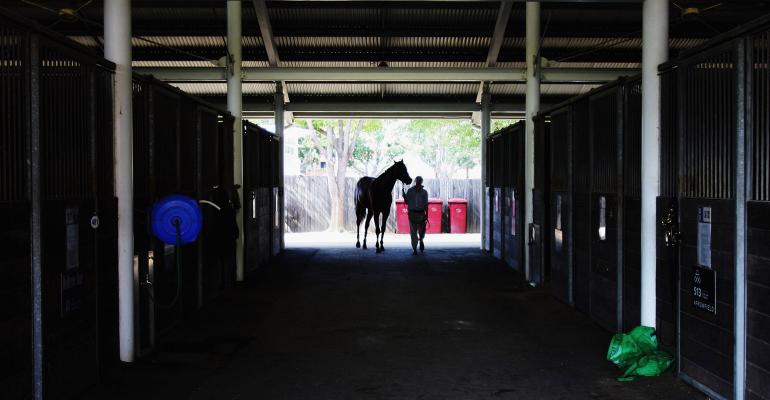 It’s been a slow climb back for the thoroughbred market since it collapsed amid the panic of the global financial crisis.

(Bloomberg) --The bull market that has spread in the U.S. from stocks to junk bonds to real estate has now made its way into a more obscure corner of the financial world: thoroughbreds.

In the Keeneland auction ring in Lexington, Kentucky, demand was so robust this month for the most blue-blooded of young colts and fillies that the half-million-dollar price mark was tripped again and again.

Forty-seven hit that benchmark level in the first day alone, including one filly that went for $2.7 million to a group of Irish breeders. And by the time the final gavel fell on the two-week auction, that number had climbed to a decade-high of 119. In total, 2,555 horses were sold for more than $300 million, setting an average price record of $120,487.

It’s been a slow climb back for the thoroughbred market since it collapsed amid the panic of the global financial crisis. (Lehman Brothers declared bankruptcy right in the middle of the 2008 edition of the Keeneland sale.) Half-million-dollar purchases sank to a post-crisis low of just 28 in 2010 before rebounding to 60 by 2013 and 93 last year. “The horse business in general, while it is a business, there’s an element of luxury goods to it as well, especially in the upper echelon of the market,” said Doug Cauthen, a bloodstock agent based in Lexington. “So it has to be the people that have wealth feeling like they can go out and spend it.”

The return to the market this month of some of the big buyers of yesteryear who had backed off during the crisis -- including Dubai Prime Minister Sheikh Mohammed Bin Rashid Al Maktoum -- suggests the rally isn’t over, Cauthen said. “It’ll continue, bar an economic downturn.”