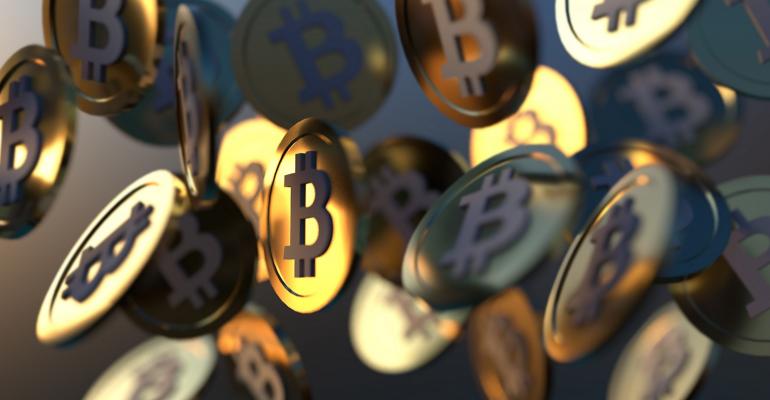 As an investable asset class, the instruments comprising digital assets can go by many names: coins, tokens, crypto, cryptocurrencies and more. All are fairly synonymous in the media, and there is no widely accepted industry standard yet. However, the semantics are irrelevant. What all of these terms refer to is an asset featuring ownership, governance, and transference confirmed through a blockchain technology.

How Does Bitcoin Differ from Blockchain?

With the introduction of Bitcoin in a 2008 whitepaper authored by now one of the world’s most famous pseudonyms, Satoshi Nakamoto, the terms “Bitcoin” and “blockchain” were publicly introduced to the world at a mass scale. Bitcoin is a decentralized currency that is cryptographically exchanged via a blockchain, which is the accounting ledger in which these transactions are verified and stored in a public and immutable fashion. Boiling down the nuances of how it all works, each time any amount of Bitcoin is sent from one party to another, a transaction is verified by the participants of the blockchain network and stored within a block of data. That block of data is assigned a randomized string of letters and numbers known as a hash. The hash within that block of data is then tied to the hash of the transaction before it, and the hash of the transaction after it. Thus, if any data changes within a block, it will not be verifiable as it will destroy the entire chain of data blocks, hence the term, blockchain.

While there is a vocal minority that feel that the only relevant use case for a blockchain is Bitcoin, this is erroneous, short-sighted, and naively assumes that innovation stops dead in its tracks. Over the past 18 months we have witnessed incredible innovation across digital assets, which has evolved into an asset class with diversity across sectors, use cases, and value propositions. The key question now is, how does one think about categorizing the landscape of digital assets? 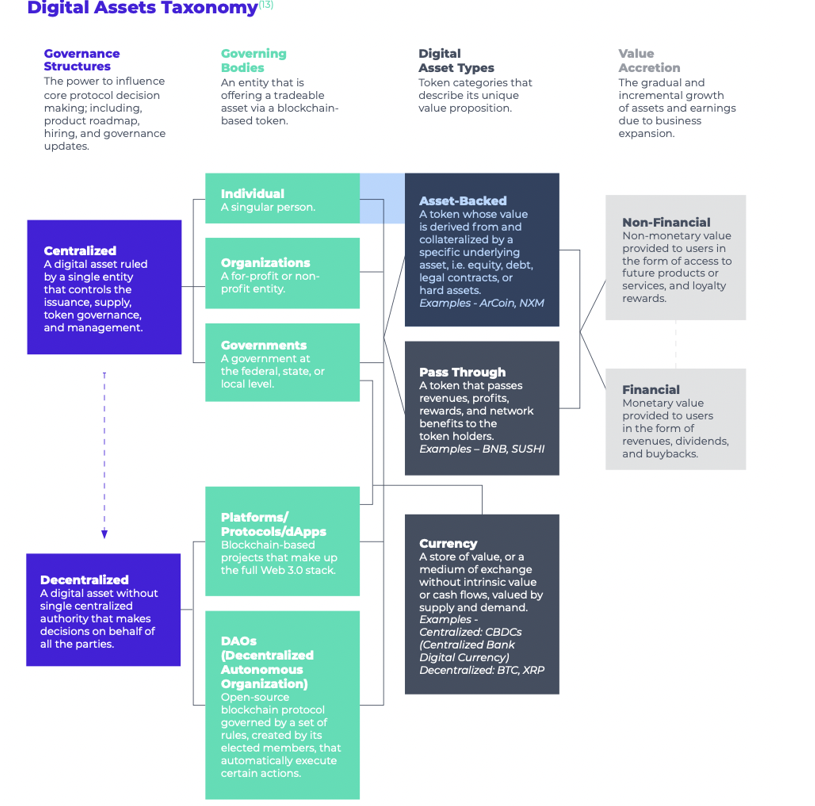 How Digital Assets are Governed

The first of these two decentralized issuers are various projects that utilize blockchain at its foundation. In aggregate, these make up a Web 3.0 value stack. Examples include Bitcoin, Ethereum, DeFi (Uniswap/Sushi/AAVE) and Solana. DAOs, on the other hand, are open-sourced blockchain software protocols governed by a set of rules in the code. DAOs exist to execute various action items based on the rules within the code. For example, a DAO could govern the lending and collateral requirement rules of a decentralized lender: if the collateral used to take out a loan falls in value by X% then that loan is automatically called and unwound. There are no loan officers nor centralized authorities making judgement calls that could end up being arbitrary from one customer to the next. In the case of a DAO, everything operates mechanically based on the way the rules are written.

Token Types - Where Does the Value Sit?

Governance doesn’t mean much if there isn’t anything valuable to govern. Once a token's governance and governing body is determined, one must look at the characteristics of the token. These generally fall into one of three categories:

Given the diversity by which these assets provide value to the token holder, it is possible for the benefits to be financial, i.e., dividends and buybacks or non-financial, i.e., services or loyalty rewards.

It’s important to understand that this is a real and rapidly growing asset class. One that exists because of blockchain technology but is still in such an early stage that there is still a need to define a high level taxonomy for it.