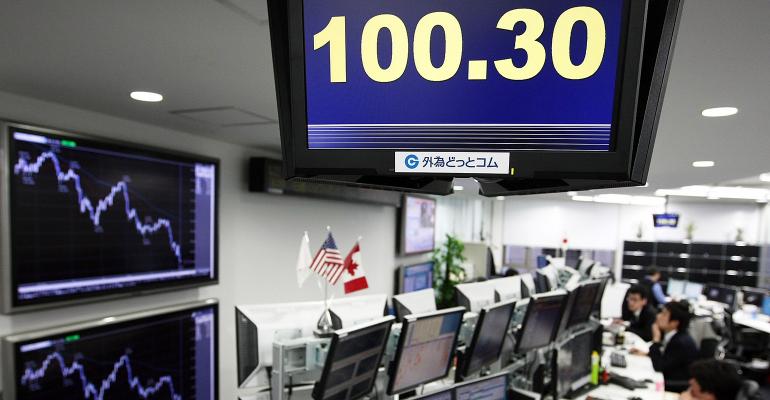 Most of the strategies currency traders use to generate profits have either lost money or erased gains this year.

By Andrea Wong and Alexandria Arnold

(Bloomberg) --It was supposed to be the year of the great comeback for currency traders. After all, didn’t Donald Trump reignite the animal spirits of financial markets by promising a slew of growth-boosting reforms?

It turns out currency managers feel more powerless than emboldened. Most of the strategies traders use to generate profit -- momentum, carry and fair value -- have either lost money or nearly erased their gains this year, according to Deutsche Bank AG models. Buying the dollar, which became a popular momentum- and carry-style trade based on the prospect of fiscal stimulus and higher interest rates, has flopped in the face of scant U.S. policy details and the possibility that Europe and Japan may soon follow the U.S. and exit quantitative easing.

"Nothing is really working all that well, which is why it’s a tough year for currency trading," said Alan Ruskin, head of currency research at Deutsche Bank Securities in New York. “There’s not one theme so far that people have latched on to. The lack of consistency is the story of this year." The absence of direction is proving particularly tough for hedge-fund managers who focus just on foreign exchange as stock markets rally. Returns on currency-only funds were flat through February, compared with the 1.6 percent return for the whole industry, Hedge Fund Research Inc. data show. The S&P 500 index is up 5.9 percent during the period. The bullish-dollar trade is an expression of both the momentum and carry strategies. In momentum, traders analyze historical patterns, such as moving averages and levels of support and resistance, for clues to whether a trade has run out of steam or has more room to continue. The dollar also benefits from carry, where speculators borrow in a currency they expect to depreciate and has lower borrowing costs, such as the euro, and in turn use the funds to buy higher-yielding currencies like the dollar.

A case in point is the emerging-market carry trade. Following years of selloff, emerging-market currencies were the best performers against the dollar this year, led by the 8 percent rally in Mexico peso and the South African rand. Yet political risk and higher rates in the U.S. have kept investors at bay.

"EM carry is probably the one arena where people could’ve made money," Ruskin said. "I’m not sure the trade has been put on as aggressively because people are still concerned about Fed tightening."