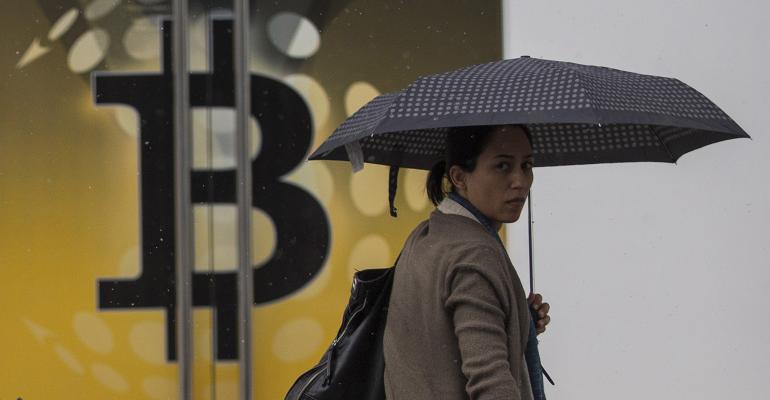 Even as investors like Josh Brown are lured by their price gains and volatility, the biggest institutions are reluctant to get in.

By Matthew Leising and Brian Louis

(Bloomberg) --Bitcoin needs “Downtown” Josh Brown more than he needs bitcoin. Brown, the chief executive officer of Ritholtz Wealth Management and author of a popular finance blog, has long been skeptical of the digital currency. He finally bought some, he said, “because the goddamn thing won’t go away.”

Still, Brown, who helps manage half a billion dollars, isn’t really a convert quite yet, especially when it comes to security measures at bitcoin exchanges. He researched several before buying his bitcoins at Coinbase Inc. and wasn’t impressed, he said in an interview. “I don’t think any one service is safer than another. It’s too early to anoint any of them as the JPMorgan of bitcoin. I don’t think that exists.”

Such concerns are the biggest obstacle to growth in the market for cryptocurrencies like bitcoin or ether, the second-biggest. Even as investors are lured by their price gains and volatility, the biggest institutions are reluctant to get in, raising further concerns about liquidity. The challenge for exchanges like Coinbase and Gemini Trust Co. is persuading major financial players that the $121 billion market for digital assets meets 21st Century standards.

The dangers are apparent. On June 21, ether crashed to 10 cents from $317.81 in trading on Coinbase. The cause was a single $12.5 million trade -- one of the biggest ever -- that triggered further selling. It all happened in just 45 milliseconds, after which computer algorithms started buying, driving prices back up to $300 within 10 seconds. Some digital coin exchanges have collapsed or customer funds have disappeared. All of which is scaring away the very investors the exchanges need to succeed.

At the heart of bitcoin trading stands the blockchain, a so-called distributed ledger that is also touted, loudly and often, as a cure-all for markets that would speed up clearing, eliminate costly delays over disputed trades and reduce capital costs for banks. The hype, however, sometimes outstrips the reality.

When Brown bought his bitcoin, he was unaware that the purchase wasn’t secured on the blockchain, that it was only held internally at Coinbase. That puts extra pressure on markets to maintain security to thwart hackers and thieves. After Brown wrote about buying bitcoin on his blog, “People were screaming at me, ‘Coinbase is not for storage!’” he said. In response, a friend helped him set up a wallet to hold his bitcoin that is secured by the blockchain.

“It’s the Wild West, it’s very much early days still,” said Richard Johnson, a market-structure analyst at Greenwich Associates who specializes in blockchain. Johnson agreed that the time and complexity of moving digital currencies from one exchange to another is “not acceptable” given how modern investors operate, and that while Gemini, Coinbase’s GDAX and other U.S.-based exchanges have strong know-your-customer procedures, more needs to be done. “If people want to get serious about this for real banking transactions, it needs to be better and easier to use.”

Investment money continues to pour into digital assets. Coinbase said Thursday that it received a $100 million investment from a group led by IVP. It plans to use the money to expand its engineering and customer support staff, open a New York office for its professional trading platform GDAX and grow Toshi, “a mobile browser for the ethereum network that provides universal access to financial services,” said Megan Hernbroth, a spokeswoman.

Adam White, general manager for GDAX, said the company only allows fully collateralized trading and should be thought of as a spot market. That means if a Coinbase user doesn’t have the cash to cover the whole trade, it doesn’t happen.

“What we’ve been very good at is preventing people from fraudulently buying digital currency,” he said in an interview. “We’re doing hundreds of trades per minute, and we immediately settle and clear all those trades on our platform,” he said. “There’s no need to post those to the blockchain.” Coinbase is regulated by New York State under its BitLicense program, which among other things requires registration by any company “performing exchange services as a customer business,” according to the state website.

Coinbase has also acquired about 35 money transmitter licenses from U.S. states that require them, White said. The exchange acts as a custodian to many of its users and stores several billion dollars worth of digital assets, according to White. Keeping those funds safe is Coinbase’s No. 1 priority, White said. Still, he acknowledged the spotty history of digital asset exchanges.

“This is an industry that has a less-than-stellar past when it comes to meeting customer requirements,” he said. The general movement is in the right direction, however, he said.

DV Chain, a sister company to DV Trading in Chicago, handles most of its cryptocurrency trading volume off-exchange, said CEO Garrett See. While DV does transact on a number of platforms, lack of liquidity and the quality of the technology can be a problem on exchanges, he said.

“Some of these exchanges take seconds or sometimes minutes between when you click to buy and when your order makes it to the exchange, if it makes it at all,” See said. Because there are so many exchanges, “liquidity is distributed across lots of different places,” he added. If the market got to a point where there was a centralized exchange and all the volume is there, “then I don’t think you’re going to see flash crashes like that as much,” See said.

See and Cumberland’s Cho are exactly the type of market makers that digital exchanges need, yet the adage of “liquidity builds liquidity” is a tough problem to solve. “Market makers play that role, of bringing agility and efficiency to the marketplace,” said Javier Paz, a senior analyst at Aite Group LLC. “The role of a liquidity maker requires at the very least close rapport with cryptocurrency exchanges,” Paz said.

There are signs that the worlds of cryptocurrency and traditional finance are coming together. Last week Gemini announced it struck a deal with CBOE Holdings Inc. to help the Chicago-based exchange create a futures contract based on bitcoin. The U.S. Securities and Exchange Commission last month issued its first guidance on digital assets and the exchanges where they trade, saying most coins are likely to meet the definition of a security and the markets where they trade need to register with the regulator.

And the U.S. Commodity Futures Trading Commission in July granted final approval for LedgerX LLC to offer options contracts on bitcoin. The LedgerX and CBOE approach includes a clearinghouse standing in the middle of all trades, which will give those efforts more legitimacy in many traders’ eyes, said Dan Hodd, co-founder of Digital Asset Investment Co., a hedge fund focused on trading digital assets.

“One of the biggest challenges in this whole space is translating the capability of this new technology and the assets that come with it to the traditional financial system,” said Hodd, who previously traded equity swaps at Citigroup Inc. “It has to fit both sides of the puzzle.”

The industry is progressing in terms of the volume of transactions on exchanges and the ease of trading, Tyler Winklevoss, who founded Gemini with his brother Cameron, said in an interview. “It’s a huge step” to be developing futures contracts based on bitcoin that will trade at CBOE, he said. “You can’t expect a child who’s learning to walk to sprint, there has to be a sequence to it.” Gemini is regulated as a New York state chartered limited liability trust company.

The number of bitcoin trades on Gemini and GDAX jumped earlier this year. While in February, Gemini’s volume hit just over 85,000, the next month it was more than 160,000, according to data from TradeBlock. GDAX transactions went from just over 171,000 to nearly 350,000 in the same span, according to TradeBlock.

“Over time all the technology becomes more fluid, better and easier to use,” Cameron Winklevoss said in an interview. “When we first got into bitcoin, we had to go to Mt. Gox,” Tyler said. The former head of Mt. Gox, the bankrupt Japan-based bitcoin exchange that imploded in 2014 after losing hundreds of millions of dollars’ worth of the cryptocurrency, began his trial last month. Chief Executive Officer Mark Karpeles pleaded not guilty in Tokyo to charges of embezzlement and inflating corporate financial accounts.

The growing pains at the exchanges should be expected at this stage of the industry’s development, said Mas Nakachi, an adviser to fintech companies who’s spent nearly 15 years on Wall Street as an analyst and former CEO of OpenGamma, a software provider that specializes in derivatives. When Nakachi was trying to learn the Solidity coding language that is used to create the ethereum blockchain, he could only find one book on it on Amazon.com.

“When was the last time there was only one book on Java? The early ’90s?” he said in an interview. “The biggest misconception coming from the institutional side is the definition of an exchange,” Nakachi said. Traditional markets segregate customer accounts and use clearinghouses to guarantee trades, among other security and operational measures, Nakachi said. “When people refer to exchanges in the crypto space, there is none of that.”

He’d like to see more steps like the ones taken by LedgerX and CBOE, which will use clearinghouses and other familiar market operations. Clearinghouses collect cash and securities like U.S. Treasuries to ensure if a trader fails there’s enough money to cover losses. They also monitor risk on a daily basis and liquidate positions if traders can’t meet their margin call.

“It’s so early it should be expected” that there are things that still need to be done, he said, “but that’s what the institutional guys are finding as they tiptoe into the space.”