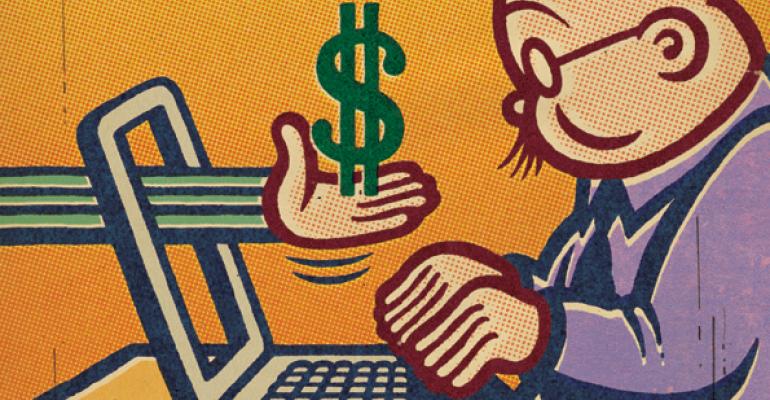 An Advisor’s Guide to Peer-to-Peer Investing

The Internet is doing away with banks as intermediaries, bringing pools of borrowers together with individual investors

Lending between individuals has been around since the beginning of human civilization. It may be the world’s second-oldest profession.

But in the modern era, there is little person-to-person about it.; borrowers work with institutions who have all the power; terms can sometimes be oppressive.

The Internet is leveling the playing field. Online peer-to-peer (P2P) lending platforms are doing away with the banks that act as slow-moving, costly intermediaries, bringing pools of borrowers together with individual investors. For professional investment managers, the result is an alternative—and attractive—income asset class. (Why do I say attractive? See my personal experience and returns with one such platform below.)

Tom Myers, a San Francisco-based principal at the wealth advisory firm Brownson, Rehmus & Foxworth, was an early adopter of P2P lending. With one of his clients on the board of Lending Club, the largest of the P2P platforms, Myers opened up a personal account. The more he looked under the hood, the more he liked what he saw as an option for some of his high-net-worth clients. Five years later, Myers now has about $75 million of client funds invested in the LC Advisors Fund, a professionally managed pool. “There’s decent return for some modest risk for the kind of clientele [average investable assets of $20 million] we serve,” he says. 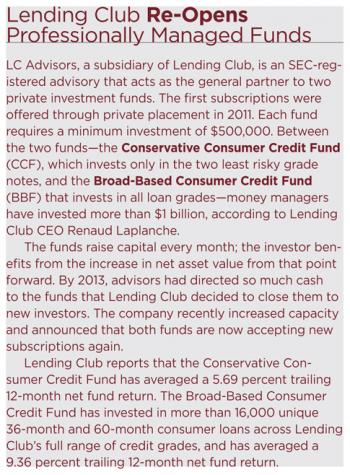 Chris Spence of Picayune, Miss.-based Diligentia LLC is such a champion of P2P lending that he established his investment firm partly to exploit the advantages of investing in it, as well as other nontraditional asset classes. The value proposition Diligentia offers clients is also nontraditional: Clients receive a guaranteed rate of return. Diligentia profits represent the spread between its net annualized returns and the guaranteed payments to clients. Spence’s firm reserves the right to invest clients’ funds in a variety of asset classes including, but not limited to, equity instruments, debt instruments, ETFs, real estate and, increasingly, P2P lending.

Spence started using Lending Club on a personal level in 2010 and quickly became a power user. “Once I got comfortable enough with P2P lending, I took an incremental approach in bringing in Diligentia assets,” he says. “I’ve been pleased by the net annualized returns. Both (Lending Club and Prosper) do a good job pricing their loans,” he adds, and the platform’s backtested results show accurate estimations of defaults.

Indeed, so popular is P2P lending among the professional investment classes that some of the peerness is coming out of the process. The influx of funds is less from individuals and more from hedge funds, family offices and other institutions seeking to park private capital. Although I’ll continue to refer to it as “P2P lending,” perhaps “marketplace lending” better reflects the emerging reality.

Regardless, for investors, the best thing about P2P investing is how easy it is. There are few barriers to entry; you can get started for as little as $25. The platforms offer wide options for investors wherever they are on the risk-aversity curve. For conservative investors who want to supplement their CDs, the least risky notes on the platforms offer substantially better returns than bank certificates for modestly higher risk. For investors who want to complement their junk-bond portfolio, there are notes with correspondingly higher risk profiles. “I’ve never felt more confident in the stability of the asset class,” Spence says. “P2P is coming into the mainstream.” Lending Club has filed with the SEC to go public later this year.

Jeffrey S. Buck, an Atlanta-based principal and member of the investment team at Diversified Trust, thinks of P2P investing as an alternative to traditional fixed income. For receptive clients, he typically targets 5 to 8 percent of a client’s portfolio, often shifting money from lower-return, credit-sensitive bonds. While liquidity exists, Buck nevertheless counsels his clients to think of these assets as a five-year hold. “A key benefit offered by P2P diversification is that it has a low correlation to other asset classes in their portfolios,” he says.

Buck and the investment team at Diversified Trust analyzed P2P strategy until they had a good understanding of the expected risks and returns. “Reaction from our clients has been positive; some clients who had been receiving monthly distributions have recently elected to reinvest instead,” Buck says. “With rates low and expected to go sideways or higher, P2P is an attractive income alternative and diversifier to traditional bond strategies.”

“In the spring of 2013, Lending Club began experiencing a huge surge in investor interest from a diverse group,” says Bo Brustkern, co-founder of Lend Academy Investments, a service established specifically to help advisors and family offices invest in established and emerging P2P platforms. “Since then, Lending Club has been oversubscribed, and as a result it has restricted allocations to virtually everyone, including many family offices and advisors. While Lending Club attempts to catch up with demand, the situation today is that many large investors are still significantly delayed in putting their money to work. Eventually, we believe the marketplace will re-establish equilibrium,” he says. 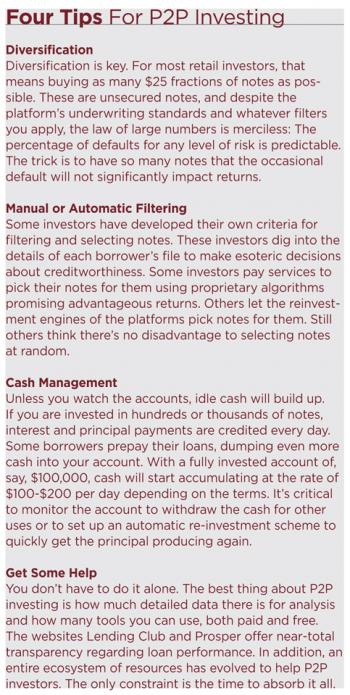 Online platforms such as Lending Club and Prosper Marketplace match lenders with borrowers of varying credit risks, offering net annualized returns of around 8 to 20 percent. Investors usually take fractional shares of large numbers of notes to mitigate risk of defaults. Both platforms provide profiles of the creditworthiness of the borrowers and the performance characteristics over time of the notes they issue. The platforms then offer the notes in what is essentially an auction. Once a note attracts a sufficient number of investors, the loan is originated and serviced. Platforms charge borrowers a one-time fee and lenders a monthly service fee.

P2P loans are typically funded by specific individuals lending their own money on a fractional basis at interest to specific borrowers. For example, a note of $1,000 to a specific borrower is often funded by $25 investments from 40 different lenders. As borrowers repay the 36- or 60-month notes, the principal and interest payments are distributed proportionally to the individual lenders. Lending Club loans are $1,000-$35,000; the average is $13,913. All notes are unsecured.

Lending Club has some rigid underwriting standards. It rejects applicants with FICO scores lower than 660 and a debt-to-income ratio below 30 percent, a set of thresholds that is said to exclude over 80 percent of applicants.

Interest rates are a function of the calculated risk that the borrower won’t repay the loan. The higher the anticipated rate of default, the higher the interest rate the borrower pays and the lender can expect. Lending Club groups borrowers into seven loan grades, A through G. Within each loan grade borrowers are further categorized into five sub-grades, 1 through 5. The most credit-worthy borrowers are graded A1, the least worthy G5. Where applicants fall on that risk continuum depends on Lending Club’s assessment of their credit history. Applicants graded A1 get to borrow money at the lowest rates, currently 6.78 percent APR for 36-month notes and 7.3 percent for 60-month notes. For borrowers rated G5, the rates are, respectively, 29.99 and 28.69 percent APR. Prosper charges even higher rates for borrowers with lower credit histories.

More than three-quarters of borrowers list debt consolidation as the purpose for their loans. So it’s a no-brainer for them to borrow at, say, 11 percent from a P2P lender to retire credit card debt of 21 percent or more. Other purposes for loans include home remodeling, vehicle purchases, medical costs and even vacations. Of course, there is no guarantee that borrowed funds will be used for the listed purpose.

One-Year In: My Experience with Lending Club

To better understand P2P investing, I opened a Lending Club account in April 2013. Initially, I deposited just $275 and carefully selected 11 of the most conservative, lowest-interest-bearing A and B notes I could find. Like most fledgling investors, I dreaded defaults. Within 45 days, I started receiving daily interest and principal payments that totaled $8.46 per month, which represented a net annualized return of 9 percent. After a few months of receiving such returns, I considered that my savings accounts paid interest of 0.25 percent and my three-year CDs paid 1.5 percent. The more I researched this article, the more comfortable I got with P2P. In the following months, I began transferring idle cash to my Lending Club account, first gradually, then more aggressively.

Returns are gratifying and immediate. My Lending Club notes outperformed not only all my other self-directed investments, but all of the respectable returns my investment advisor harvested on my behalf in my retirement accounts.

Spending time on the platform, I saw that most savvy investors preferred the highest-yielding notes. In fact, there’s intense competition for the most desirable notes. Historical data seems to bear this out. The significantly higher yields (as high as 15 to 25 percent) seem to more than compensate for the very real increase in predicted defaults. My own tolerance for defaults increased. 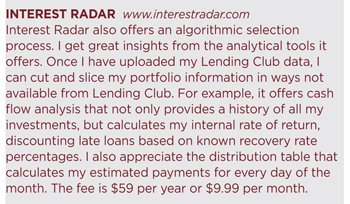 A Random Walk Through Peer-to-Peer Lending

When I started, I wanted to see if my careful selection of notes would outperform notes selected at random. As an experiment, I created a diversified portfolio of 250 notes I individually selected, one by one. At the same time, I created another portfolio filled by an equal number of notes selected at random. To this point, I can report that I’ve found no significant difference in performance.

A number of services insist they have a better way to filter out and select the best-performing notes (see sidebar). But Renaud Laplanche, the CEO of Lending Club, insists that no loan is “better” than any other. “There is no evidence that any investor has generated better-than-average returns on the platform consistently,” he says. “[Advisors] can tailor their portfolios based on their risk appetite and objectives, but that doesn’t have a negative impact on the other investors.” 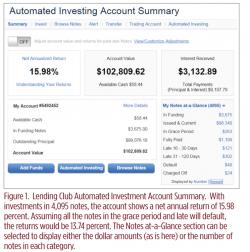 Fifteen months after starting this experiment, my account had slightly more than 4,000 notes of every risk threshold (see Figure 1). I’m only about halfway through the lifecycle of the 36-month notes and even earlier for the 60-month notes. Defaults, if they happen, tend to occur later in the process. Still, as I filed this article, I had only two notes go into default. Of course, 69 notes are in various stages of arrears and many of these will almost certainly be charged off. Interest from P2P loans is generally taxed as personal income instead of capital gains.

My net annualized return for my entire portfolio was tracking at 15.98 percent. If I assume that every late note in my portfolio will eventually default and be written off entirely, my net annualized return would be 13.74 percent. If I use aggregated past returns across thousands of other investors as a guide (see Figure 2), I can eventually expect a yield of 9 to 11 percent for the broad risk profile that I selected. 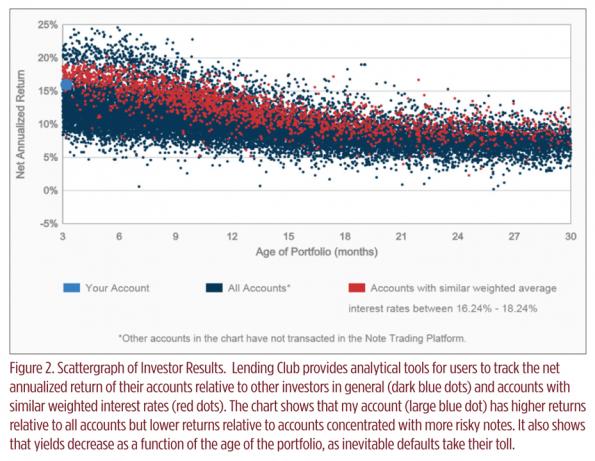 As my account grew, I learned that it’s simply not feasible to manually manage more than a handful of large P2P portfolios. These days I don’t even select notes; I let a variety of robots do it for me. Lending Club has a free automated investing tool that buys notes for my account based on a risk profile that I have defined. I also subscribe to two premium services that select my notes for me.

What the Web has done to other intermediaries such as booksellers (Amazon), travel agents (Expedia) and the music industry (iTunes), P2P investing is doing to banks. One day the banks will wake up and realize that the monetization of liquidity has been supplanted by P2P lending. The smart money is on marketplace investing. Consider that Google recently invested $125 million in Lending Club. Would they do that with a traditional bank?