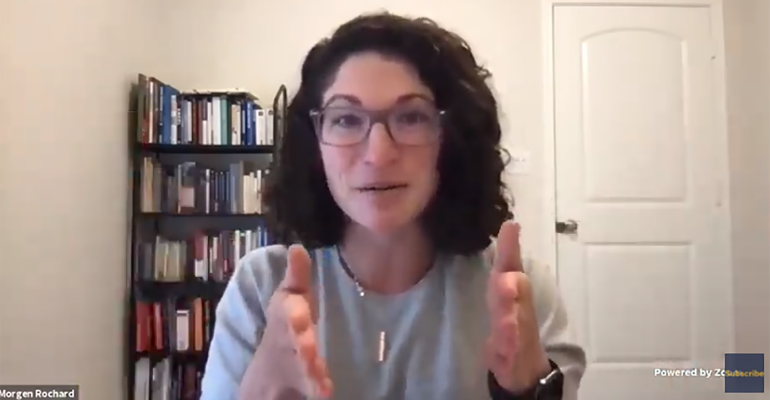 Morgen Rochard says bitcoin is the "most certain" of an uncertain asset class.
Investment>Alternative Investments

Advisor: Bitcoin Is the Only Digital Asset Worth Investing In

There are nearly 6,000 cryptocurrencies worldwide, and a lot of advisors may have clients asking about whether to invest in some of them. Morgen Rochard, managing member at Origin Wealth Advisers in Austin, Texas, says Bitcoin is the only one worth investing in, speaking on a panel of crypto executives at CoinDesk’s 2021 Bitcoin for Advisors conference.

She says she does not provide financial advice on any digital asset that is not a registered security. But that doesn’t mean advisors should ignore the space; in fact, a common theme discussed through much of the conference was the importance of advisor education on the digital asset space, so that they can talk intelligently about it when clients bring it up.

“The best that we can do as advisors is give them as much information as we can, speak intelligently and fluently on this subject so that they can make the right decision,” Rochard said. “If you’re just going to dismiss this whole asset class in general or you’re not going to be willing to answer some of the nitty gritty questions that clients have about bitcoin or really about any of the digital assets, then they’re going to get into trouble. They’re going to start trading away the casino.”

Eric Ervin, co-founder of Onramp Invest, does not recommend simply buying the top 10 crypto assets as a way to diversify. “There is such a thing as a diworsification”, he said.

Take Bitcoin satoshi's vision (BSV), a splinter currency of Bitcoin Cash, that was in the top 10 last year. Over the summer, exchanges suspended trading of BSV, and Binance closed down its BSV mining pool.

Ervin also doesn’t support the idea of wrapping Bitcoin into an exchange traded fund. Many asset managers have filed for Bitcoin ETFs, but none has been approved by the Securities and Exchange Commission.

“That’s like an IBM ETF to me,” Ervin said. “What’s the point? It’s a liquid asset; anyone can get access. Anyone can open an account at Kraken or Gemini or Coinbase, and we don’t need to bring it on an exchange and put it in an ETF. That’s like putting training wheels on a Ferrari.”

Ervin said the optimal allocation to crypto assets, according to mean variance optimizers, is 15% to 17% of a client’s portfolio. But it really depends on how much volatility any given client can stomach. For investors just starting out in the space, he recommends allocation of 3% of discretionary wages over at least a three-year time horizon.

Rochard says every client is going to look a little different. With conservative clients, you’ll have to hand hold them through the process of why you’re holding certain asset classes in their portfolios.

“I don’t think it’s so simple as saying ‘OK well I’m going to do a 5% allocation to bitcoin, so I’m just going to take it from the stock bucket,’” she said. “I think for some clients that might work, but for other clients, that’s going to be completely inappropriate.”

“It’s not a stock investment, and it’s definitely not a bond investment. If anything, it’s just like this long term savings cash thing that you keep in your portfolio. I think the question really is, where can you allocate this in a long-term way for your client that makes the most sense?”

For clients with moderate risk tolerance, Rochard talks to them about how it’s a long-term asset class to be invested for at least the next 30 plus years, so there’s no need to look at the day-to-day activity.

“For clients who have really high risk tolerances and who we have continued discussions about the asset class, we actually do more of a set it and forget it type of position,” she said.

A lot of advisors may think they’ve missed the boat, given Bitcoin’s rise over the last decade. But Rochard says it’s still so early.

“It’s sometimes hard to understand that an asset class with above-average returns for the last decade could potentially have above-average returns for another decade,” she said. “But I think the more that advisors are willing to educate themselves and meet their clients where they are in the space, the more they’re going to realize that it’s still so early. This asset class has only been around for a decade.”

“There’s so much more upside left to be had,” said Dan Held, growth lead at Kraken, a cryptocurrency exchange. “If you want to be taken seriously as a financial advisor, and you haven’t touched on something like bitcoin after being around 10 years, you risk losing your clients.”

“Get off zero, get educated, understand bitcoin a little bit better, and start with some of the basics.”