/sites/all/themes/penton_subtheme_wealthmanagement/images/logos/footer.png
Recent
Recent
What’s Behind the Appeal of Portfolio Hedging Using Inverse ETFs
May 29, 2020
Ameriprise Touts Merits of Virtual Recruiting
May 28, 2020
Stifel Settles With FINRA For More Than $3 Million Over UITs
May 28, 2020
LPL Lures Washington-Based Team from Wells Fargo FiNet
May 28, 2020
A Can’t-Miss COI Campaign
May 28, 2020
Featured
Poll: 15 Classic Books on Investing and the Markets
Apr 03, 2020
FICO Updates and Their Impact on Credit Scores
May 06, 2020
Franklin Templeton Fires Portfolio Manager Amy Cooper Involved in Central Park Dog Incident
May 26, 2020
The Top Colleges for Financial Planning
Oct 03, 2019
Investment Trend Monitor - Advisor Use of Variable Annuities
brought to you by 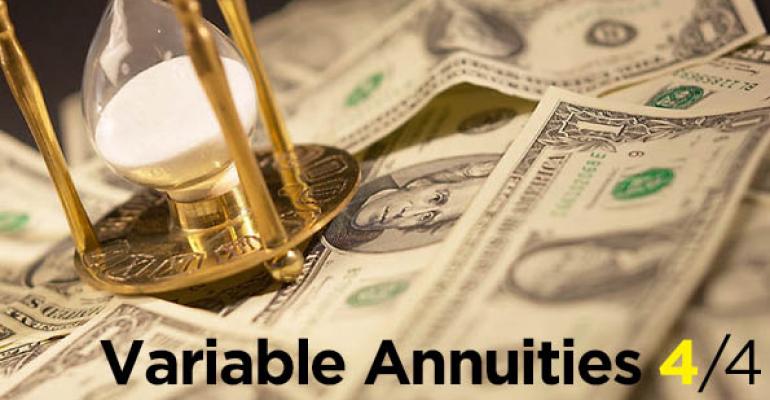 Advisors focus primarily on the long-term security of the issuer when weighing variable annuity options for their clients.

Advisors focus primarily on the long-term security of the issuer when weighing variable annuity options for their clients. Seven in ten advisors (70%) reported that insurance company ratings and reputation were very important to them when evaluating a variable annuity—the highest of any of the listed criteria. Investment performance (58%) was another very important factor, while the breadth of fund selection and the availability of a guaranteed minimum withdrawal benefit (GMWB) were tied for third at 52%.

Advisors are split on what to expect over the next five years. Nearly 4 in 10 advisors expect their use of the products to stay the same, and an almost identical percentage expects their variable annuity use to increase slightly. Only 15% of advisors expect to reduce their use of the variable annuities over the next five years.