/sites/all/themes/penton_subtheme_wealthmanagement/images/logos/footer.png
Recent
Recent
11 Must Reads for the CRE Industry Today (Aug. 18, 2022)
Aug 17, 2022
Norway’s Wealth Fund Posts Biggest Half-Year Loss on Record
Aug 17, 2022
NYC Denies Every Hurricane Ida Property Damage Claim, Citing 1907 Rule
Aug 17, 2022
Where Are We in Return to the Office? Once Again, Nobody Is on the Same Page.
Aug 17, 2022
Featured
The 10 Best and 10 Worst States in Which to Retire in 2021
Jul 15, 2021
Poll: 15 Classic Books on Investing and the Markets
Apr 03, 2020
Fifteen Must-Listen Business Podcasts for Advisors
Aug 14, 2020
Celebrity Estates: Jay Leno and Planning for Classic Car Collections
Feb 22, 2022
Advisor Confidence Index (ACI)
brought to you by 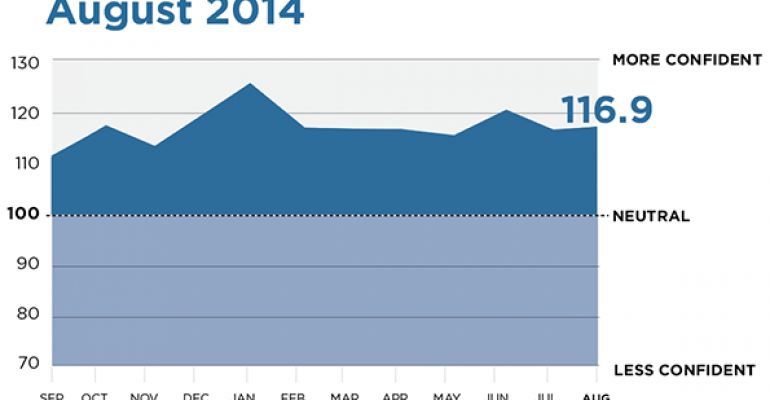 Financial advisors’ views of the U.S. economy in August were relatively unchanged from the previous month, even while their level of optimism in the future prospects of the stock market reversed a months-long decline, according to Wealthmanagement.com’s most recent Advisor Confidence Index.

As the stock market broke through to new record highs in late August, the overall level of advisor confidence in the future of the economy and markets rose a mere 0.4 percent to 116.94. Digging deeper, advisors’ reported a slight decline in optimism for the economy while becoming more confident that, in the near term at least, the stock market has more room to run. While still in positive territory, the sentiment gauge has fallen 5 percent since the beginning of the year.

Wealthmanagement.com’s Advisor Confidence Index (ACI) is a monthly poll taken among some 150 independent financial advisors who have previously agreed to answer questions gauging their degree of optimism in the economy both now and in the future, as well as their perception of the stock market over the next six months.

While the sentiment gauge remained level, several advisors said they feared that global security risks could derail the market’s trajectory. “There will be added volatility over the next several months as QE winds down and speculation on interest rate movement increases. Throw in geopolitical risks and there is a lot of anxiety that may stall the stock market. In another 12 months things should be clearer,” said Roger Willroth of Marrs Wealth Management.

Jonathan Foster, the CEO of Angeles Wealth Management, took a dissenting view and said volatility in the markets provided a buying opportunity. “Nathan Rothschild said buy on the sound of cannons, sell on the sound of trumpets. The cannons are firing from Ukraine to Iraq. Time to buy equities.”

Samuel Reid of Charter Oak Capital Management agreed. “The latest geopolitical crises should present a good buying opportunity for US equities,” he said.

Others were more skeptical the market rally could last. “We are now over 1,400 days without a 20 percent correction, which is more than double the median. Black Monday, the dot.com bust, and the mortgage crisis were the last times that the market was this long in the tooth,” said Paul Bennett of United Capital Private Wealth Counseling.

Advisors agreed that any economic growth would be moderate. “The end of QE is soon. GDP will be stuck in the 2 percent range for years due to the retirement of baby boomers leading to a shrinking labor force even as workers' productivity improves,” said David Ware of Barrington Capital Management.