/sites/all/themes/penton_subtheme_wealthmanagement/images/logos/footer.png
Recent
Recent
Hybrid Work Was Supposed to Create the Best of Two Worlds. It’s Turning Out to be a Challenge for Office Tenants
May 25, 2022
Eight Must Reads for the CRE Industry Today (May 26, 2022)
May 25, 2022
Cresset and Meristem Merge to Create $27B AUM Multifamily Office
May 25, 2022
Know the Rules: State Residency and Taxation for Individuals, Trusts, and Estates
May 25, 2022
Featured
The 10 Best and 10 Worst States in Which to Retire in 2021
Jul 15, 2021
Poll: 15 Classic Books on Investing and the Markets
Apr 03, 2020
Fifteen Must-Listen Business Podcasts for Advisors
Aug 14, 2020
Celebrity Estates: Jay Leno and Planning for Classic Car Collections
Feb 22, 2022
Advisor Confidence Index (ACI)
brought to you by 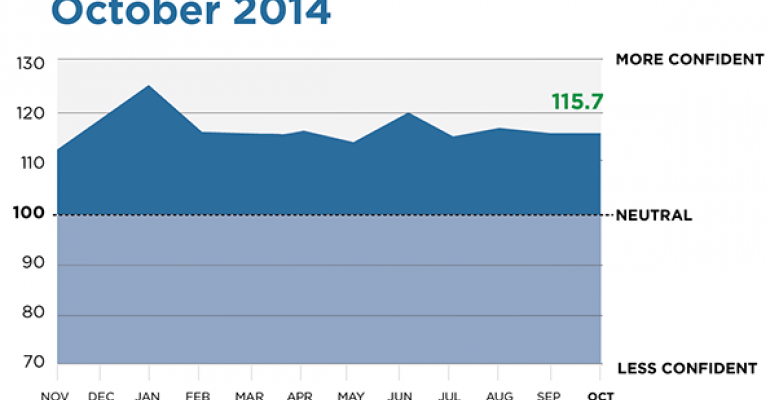 The current reading is at its lowest point of 2014

Financial advisors confidence in the current and near-term future of the economy was largely unchanged through the month of October, as investors awaited the end of the Federal Reserve’s quantitative easing program while riding out volatility in the stock market.

According to Wealthmanagement.com’s Advisor Confidence Index, a monthly survey of some 300 financial advisors, optimism levels were recorded at 115.66, unchanged from the month of September.

A reading over 100 indicates optimism, but at 115.66, the current reading is the lowest it has been year-to-date, having dropped from a high of 123.02 in January. The broader equity market, as measured by the S&P 500, rose 9 percent during the same time period.

But October was a choppy month for the markets. Many advisors said they were simply waiting out the recent round of volatility to get clarity around the market’s direction. “It's important for clients to have a strong understanding of the behavioral aspects of markets. In September strategists were raising year-end targets for the S&P and talking about a stock market that wanted to go higher, now they're talking about an overdue correction and overvaluation. The psychology of crowds drives volatility beyond what the efficient market hypothesis would ever suggest possible,” said Rick Thoreson of Thoreson Steffes.

“The stock market may move sideways in up and down volatility until the moves by the Federal Reserve are analyzed. The end of bond purchases and the way interest rate moves are perceived will govern the next several months,” said Roger Willroth of Marrs Wealth Management.

Other advisors suggested the market was headed for a fall, and were moving assets to cash to wait it out. “The S&P is trading at a 25 percent premium to historic levels even after the recent declines. Match that with anemic GDP growth rates, deduct inflation coupled with a tapering Fed, disappearing liquidity, a nation lacking in leadership and a world in turmoil and we are content with a large cash position. When I start hearing ‘the market is oversold’, then I'll re-evaluate,” said Paul C. Spitzer of Advanced Practice Advisors.

“Slow growth, low interest rates, and a volatile stock market are with us for at least the next year or two. Buy your favored stocks when they become very undervalued and hold them. Put your conservative monies in the top rated bond funds with some in the unconstrained area. Avoid treasuries. Use liquid alternative investments that are not correlated to the markets for a portion of your portfolio to create the proper asset allocation,” said Peter Pottle of Pottle Financial Services.

While the market was up for the month of October, there were scares as the market took a dive on several trading days. Other advisors were anticipating the mid-term elections to give some indication of future economic direction.

“The current market decrease is fear, not structural. The U. S. companies and U. S. economy are in good shape and getting better. Begin to control Ebola and get strong, common sense decision makers in the new election and the market will rise,” said Rob Callahan of Callahan Financial Planning Corporation.