/sites/all/themes/penton_subtheme_wealthmanagement/images/logos/footer.png
Recent
Recent
Eight Must Reads for the CRE Industry Today (May 19, 2022)
May 18, 2022
Russian Billions Hidden in US Spur Backlash to Financial Secrecy
May 18, 2022
Mariner Wealth Advisors Expands in Michigan with Emerson Wealth Acquisition
May 18, 2022
Macquarie Alum’s GreenPoint Eyes $1 Billion for Real Estate Bets
May 18, 2022
Featured
The 10 Best and 10 Worst States in Which to Retire in 2021
Jul 15, 2021
Poll: 15 Classic Books on Investing and the Markets
Apr 03, 2020
Fifteen Must-Listen Business Podcasts for Advisors
Aug 14, 2020
Celebrity Estates: Jay Leno and Planning for Classic Car Collections
Feb 22, 2022
Advisor Confidence Index (ACI)
brought to you by 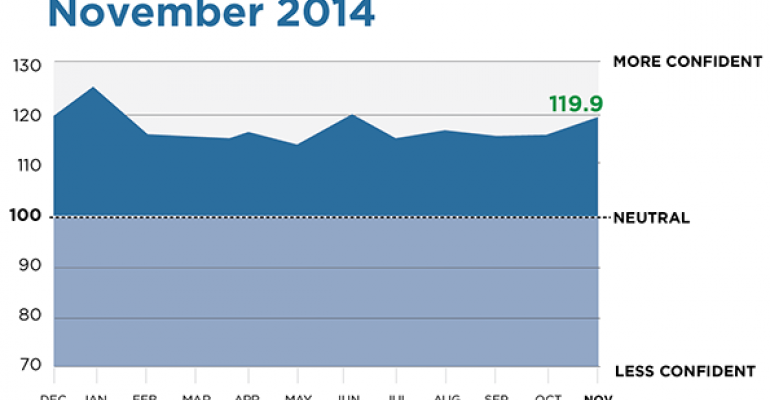 Confidence in the economy improved 3.7 percent

In a month filled with a string of record-high equity markets and a Republican victory in the mid-term elections, financial advisors regained the confidence in the economy that they’d lost over the summer and early fall.

According to WealthManagement.com’s Advisor Confidence Index, a monthly survey of 118 wealth managers, confidence in the economy improved 3.7 percent in November, the largest monthly gain in a year. At 119.95, the Index is as high as it was in June, though still shy of January’s high of 123.02.

The S&P 500 grew 2.5 percent in November and markets were largely spared from the levels of volatility that plagued October. Though there wasn’t a single day that the S&P 500 climbed more than 1 percent, rising corporate profits and an improving U.S. economy helped drive stock market growth.

“As the U.S. economy continues to improve, albeit slowly, and businesses continue to find ways to be more efficient, the stock market can continue to show modest improvement,” said Karl L. Hicks of Leonard Financial. “This modest improvement over time is sustainable and desirable for investment growth.”

“We gave time before rates climb high enough to cause a headwind for stocks. For U.S. equities, there’s still time to ‘get while the gettin’s good,’” said Chris Casanega from Sharper & Granite LLC.

Some advisors tempered their optimism. One concern is that weak economies in Europe and Asia would eventually have a negative affect on U.S. markets, and that the money flowing from Central Bank stimulus programs across the globe is artificially supporting equity markets and will ultimately dry up.

“Unprecedented quantitative easing by Central Banks across the globe has found its outlet - the U.S. stock market,” said Paul Bennett of United Capital Private Wealth Counseling. “The correlation between Central Bank… balance sheets and the S&P 500 is almost one, when historically it has been negative. This doesn’t bode well for the markets when (not ‘if’) Central Banks start to tighten.”

Still others, like Paul C. Spitzer from Advanced Practice Advisors, think another round of quantitative easing is necessary. “Without the artificial stimulus this market does not appear to be able to be substantial enough to stand on its own earnings.”

Many advisors felt that the mid-term election gave a strong indication of the economy’s direction, but disagreed what that indication was. Advisors like Hicks hoped the new Congress would limit government interference in the markets to increase performance, while George R. Gay from First Affirmative Financial Network was, “concerned about government behavior after the Republicans take over the Senate.”

“White House [and] Congress will still be at loggerheads,” said Richard A. Hewitt of Praetorian Guard. “Growing the economy and getting away from killing all growth legislation will be a start to a better economic future.”

Advisors also used history to make the case against being too confident in the economy. Some pointed to various factors that have historically been a precursor to bear markets, while others reasoned that November tends to be a seasonably favorable month with “built-in upward bias to the markets.”

Malcolm E. Polley from Stewart Capital Advisors LLC said it would be unprecedented for the market to continue its current growth.