/sites/all/themes/penton_subtheme_wealthmanagement/images/logos/footer.png
Recent
Recent
Seven Must Reads for the CRE Industry Today (May 24, 2022)
May 23, 2022
Investment Activity in the Skilled Nursing Sector is Ramping Back Up
May 23, 2022
NASAA Approves Model Rule Targeting Unpaid Arbitration Awards
May 23, 2022
New York Tax-Paying Residents Were Moving Out Even Before Covid
May 23, 2022
Featured
The 10 Best and 10 Worst States in Which to Retire in 2021
Jul 15, 2021
Poll: 15 Classic Books on Investing and the Markets
Apr 03, 2020
Fifteen Must-Listen Business Podcasts for Advisors
Aug 14, 2020
Celebrity Estates: Jay Leno and Planning for Classic Car Collections
Feb 22, 2022
Advisor Confidence Index (ACI)
brought to you by 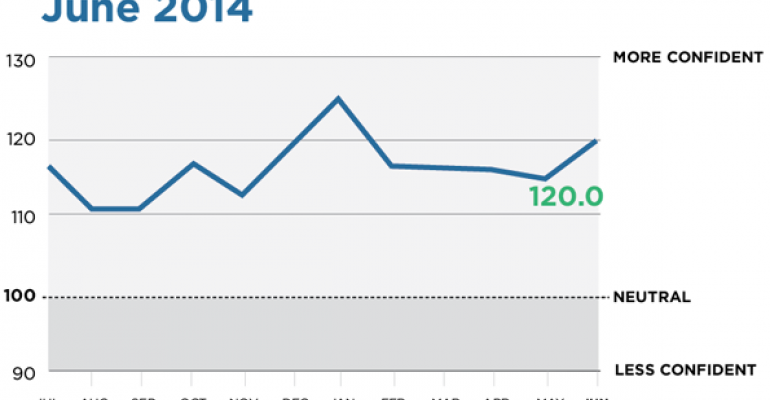 Financial advisors seem to have capitulated to the bull market.

Advisors’ confidence in the U.S. economy, as well as the near-term future of the stock market, increased significantly, according to Wealthmanagement.com’s monthly Advisor Confidence Index (ACI). The index rose 3.9 percent during June to end the month at 120.0, the highest level since January and the first time in six months the index moved in a positive direction.

The ACI surveys some 150 financial advisors who have agreed to serve on a panel and answer a monthly survey gauging their level of confidence in the both the current and future state of the U.S. economy and the stock market. A reading of over 100 indicates positive confidence, under 100 indicates pessimism. Wealthmanagement.com’s Advisor Confidence Index is sponsored by First Clearing.

While the level of confidence has consistently remained above 100 year to date, it has declined every month since January as advisors indicated they feared the stock market in particular was inflated by the Federal Reserve’s monetary policies and near-zero real interest rates, and due for a correction. Given the five-year bull run in equities, the market, advisors believed, was due for a correction.

Fewer of them may be thinking that now. In June, advisors seem to have reasserted a belief that the economy and markets are strong.

The turnaround in advisor confidence in the equity markets, up 4.3 percent in June, comes as both the S&P 500 and the Nasdaq reported six straight quarterly gains at the end of June, a winning streak not seen in 14 years, according to Reuters.

Many advisors pointed to the growth in corporate profits, and the opportunity for companies to put the cash to work, as reasons for their positive outlook.

“As the GDP picks up, public companies with excess cash will scramble to invest capital or risk under-performance. This will boost US economic activity and the stock market,” said Jonathan Foster of Angeles Wealth Management.

“What’s not to like?” says Brian Gilmartin of Trinity Asset Management. “The economy and the stock and bond markets are doing okay. The constant cacophony about higher rates has not materialized. Growth is average, inflation is subdued, S&P 500 earnings are growing 6 to 8 percent.”

To be sure, many hold the Federal Reserve’s monetary policies responsible for the run up in the stock markets, and some individual advisors believe a market correction is inevitable.

“As long as the Fed pursues a zero-interest-rate policy, there will be a reasonable bid to the stock market from investors looking to secure a steady, positive cash flow,” says Todd Petzel of Offit Capital.

Other comments from financial advisors on their economic sentiment:

“With so many money managers looking for an entry point for new cash, any healthy pullback (in stock prices) will be short lived.” - Jason Vavra, Vavra Capital Management.

“The GDP will recover from a weak first quarter but fade during second half of the year. The current (employment) level is not enough to move the economy faster than 1 to 2 percent. Inflation in the near term is a negative but long term we are still in a disinflationary mode. Geopolitical risks are a prodigious game changer for any forecast.” - Kenneth Woods, Asset Preservation Advisors

“As we are now entering the sixth year of this current bull market, I believe investors should be on alert. With the stock market (S&P 500) up 48% the past two years and corporate profits in the low teens, the market has gotten way ahead of itself.” - Kevin Stockton, Horter Investment Management

“I think the general bullishness among advisors will precipitate a 10% pullback in the market.” – Edward Wilson, Stratos Wealth Partners

“The stock market has had a big run up. I believe the economy is continuing to improve gradually. The market will likely move sideways for a while until the economy catches up to justify present valuations.” - Naushad Virji, Virji Investments

“The U.S. Administration has no idea how to improve the state of the economy, and worse, the ideas they do have are 180 degrees wrong, like raising the minimum wage, not reforming Freddie Mac and Fannie Mae and Environmental Protection Administration mandates. There is going to be a lot more damage to the economy over the next two years.” - Richard A Hewitt of Praetorian Guard.

“The debate about a stock market bubble is understandable from a behavioral finance standpoint, but it's more likely we're in a 'tiny bubbles' market where the broad market PE is perhaps overstated because of the tiny bubbles of overvaluation of individual companies that is not as widespread as it was in the late 90s, but unique to certain companies that defy valuation gravity.” - Rick Thoreson, Thoreson Steffes.

“I am concerned to see the weakening in the U.S. Dollar as compared to the Euro, after the European Central Bank announced that it would push banks to lend more by taking the interest rate it pays on funds deposited at the ECB negative. A weaker dollar puts more pressure on the US consumer, and that could slow the economy.” - Angela M. Bender, AMJ Financial Wealth Management.

“Two percent GDP is the new normal but the stock market is priced for a higher outcome.” - David Ware, Barrington Capital Management.

“The GDP will Recover from a weak first quarter but fade during second half of the year. The level of (current employment) is not enough to move the economy at a pace faster than one to two percent. Inflation in the near term is a negative but long term we are still in a disinflationary mode. Geopolitical risks are a prodigious game changer for any forecast.” – Kenneth Woods, Asset Preservation Advisors.