/sites/all/themes/penton_subtheme_wealthmanagement/images/logos/footer.png
Recent
Recent
What’s Behind the Appeal of Portfolio Hedging Using Inverse ETFs
May 29, 2020
Ameriprise Touts Merits of Virtual Recruiting
May 28, 2020
Stifel Settles With FINRA For More Than $3 Million Over UITs
May 28, 2020
LPL Lures Washington-Based Team from Wells Fargo FiNet
May 28, 2020
A Can’t-Miss COI Campaign
May 28, 2020
Featured
Poll: 15 Classic Books on Investing and the Markets
Apr 03, 2020
FICO Updates and Their Impact on Credit Scores
May 06, 2020
Franklin Templeton Fires Portfolio Manager Amy Cooper Involved in Central Park Dog Incident
May 26, 2020
The Top Colleges for Financial Planning
Oct 03, 2019
Morningstar Investment Conference
brought to you by 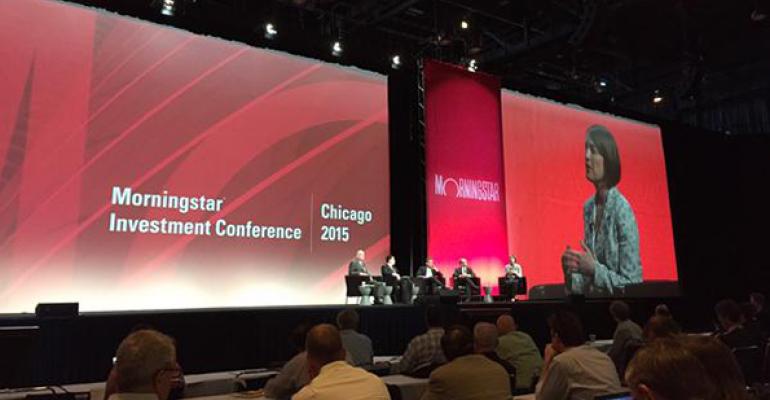 One of the bigger debates in investing is whether passive strategies are superior to active strategies, but that’s the wrong discussion to have, say investment advisors.

Rather, financial advisors need to focus on whether individuals have enough funds for retirement and how to get people over their fears of being in the market altogether.

“The debate isn’t active versus passive, it’s how do we work with the two together,” said Rob Lovelace, president of Capital Research and Management Company, part of Capital Group. “The goals are the same: making sure people have the money they need, especially in retirement.”

Even a portfolio manager for Vanguard, the company known for its index funds, agreed.

“It’s not an either or,” said Joe Davis, global head of Vanguard Investment Strategy Group at Vanguard.

Both spoke at the Morningstar Investment Conference in Chicago on Wednesday.

Passive investing has seen big inflows, particularly over the past few years, and Davis listed why he thought that was the case. As defined contribution plans grow, target-date funds take up the bulk of the money. Davis said roughly 90 percent of the cash flow in defined contribution plans are for target-date funds. Second, investors are able to access global capital markets much more easily through index products, and third, more active managers are going to hedge funds.

Diana Strandberg, senior vice president and director of international equity for Dodge & Cox, said active management has a place, particularly for investors with a longer-term time frame. In a study of 90 large-cap U.S. active value managers and 30 U.S. large cap passive funds between 1995-2015, they found when measuring risk over in two-year increments, among other things, that volatility in actively managed funds falls 20% and alpha is strongly positive.

Fees are big reason why individuals think passive index investing is superior, Lovelace said, even though there are actively managed funds that have low fees and better returns. Fees are important he added, and when seeking at an active manager, look for a manager who has low fees, a solid track record and is with a fund that invests significantly in their own funds.

“If you combine those, you can come up with a list of managers with superior results at lower volatility,” he said.