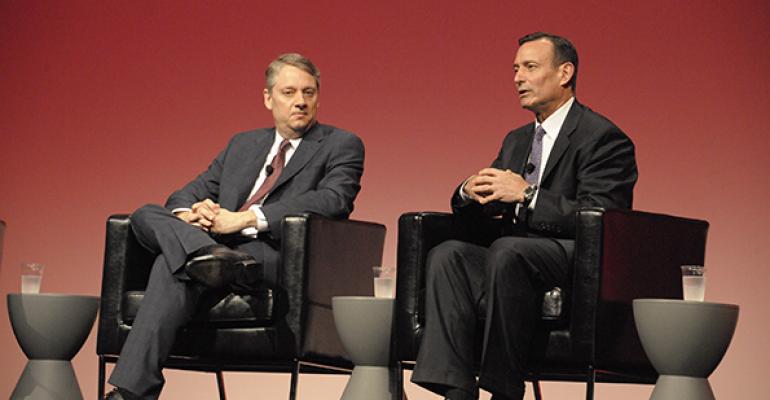 Demand for income continues to rise, not only in the U.S. but globally, and there are a growing number of investors who are prepared to underwrite risk in order to get a higher rate of returns, said senior leaders at PIMCO.

“This demand for income is global and it cuts across all kinds of investors,” said Douglas Hodge, chief executive officer at PIMCO.

It’s not just individual savers, but it also includes income-oriented strategies in defined contribution and defined benefit plans in the U.S. and beyond, he said.

“The entire world is living in low and flat,” he said, echoing a macroeconomic theme PIMCO has expressed about the level of interest rates.

They also addressed the turmoil the fund saw after the highly publicized departure of star fund manager Bill Gross and the airing of internal discord in the corporate culture of the company. The anxiety over Gross’ exit has lessened, Hodge said, but the uproar took its toll. Total assets under management are now around $1.7 trillion, versus the peak of $2.1 trillion in March 2013, he said.

Providing income is one of the top priorities for PIMCO, Hodge said. There is a “large cohort of investors” who are willing to accept less-liquid markets or leveraged risk to get a higher rate of return, which is why expanding alternatives is key for the firm.

They are also concentrating on equities, and core bonds remain significant. “Our flagship product is the Total Return Fund…. When the yield curve steepens, and it will, we want to be a leader in the core bond space. We’re not conceding anything,” Hodge said.

Ivascyn said they are expecting more volatility ahead, which is where they said active management should outperform. Overall he said PIMCO is cautious on duration, but is generally constructive on global equity market returns, but added equity returns will likely be “much closer to mid-single digits than high single digits.”

Internally, Ivascyn said, PIMCO continues to use its macroeconomic philosophy, but he added the firm is trying to listen more to other viewpoints in the company. “We’re trying to critique our existing positions and challenge our existing views across our portfolio,” he said.