The old adage is that a sliding stock market anticipates a recession. Does the market’s recent rocky passage portend an economic slump? Not hardly. It pays to keep that in mind if we run into rough times for stocks ahead.

The chances of the economy sliding into a recession in the next six months are low.  The reason this matters is market pullbacks during recessions tend to be much more severe than during non-recessionary times.  The three 40%-plus stock downturns since World War II happened during recessions.

Here’s a checklist that backs up our optimism:

At 12.5%, the late-August slide falls into the range of 10% to 20% –that is, a correction, not a bear market, conventionally defined as deeper than 20%.  Pullbacks of the most recent magnitude have occurred approximately every three years since World War II with an average recovery period of three months. 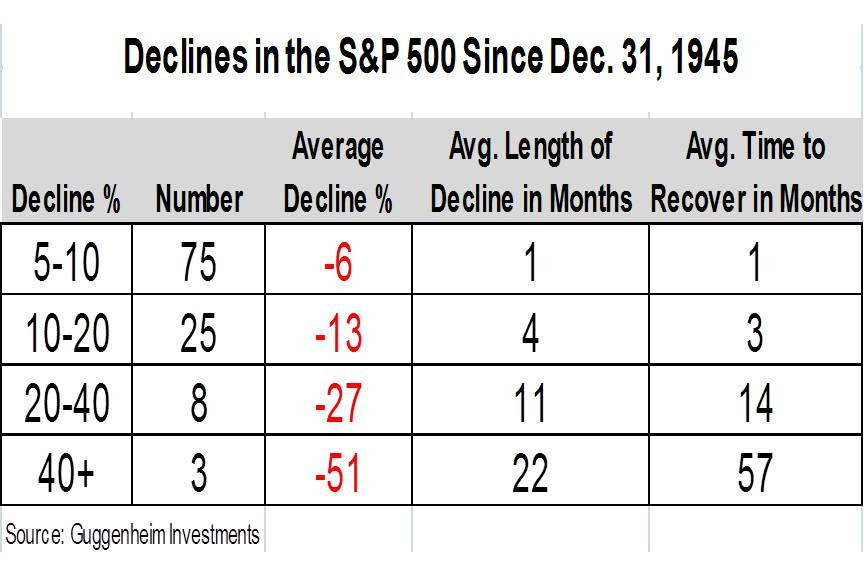 Outside of recessions since 1962, the only pullback greater than 30% was “Black Monday” in October 1987. The Standard & Poor’s 500 declined by 33.5% from high to low, but ended the year in positive territory and rallied another 12% the following year.

If we compare August 2015 to the three most recent August downturns that were based on global risk events, we see three instances of rapid recoveries and the S&P 500 ending the year with positive performance.

In August 1997, there was a currency, stock market and debt crisis that began in Thailand and spread to much of Southeast Asia and Japan. In August 1998, the Russian government devalued the ruble and defaulted on domestic debt.  This contributed to the failure of the Long-Term Capital Management hedge fund, which required the Federal Reserve’s intervention to stabilize the stock market and keep the fund’s liquidation orderly.

In August 2011, the U.S. was at risk of defaulting on its debt and the European sovereign debt crisis was spiking with worries about the PIIGS (Portugal, Italy, Ireland, Greece and Spain) defaulting. Standard & Poor’s downgraded U.S. government debt for the first time in history, and the stock market suffered its most volatile week since the 2008 crisis.

Shown below is a chart of how the year finished after each August market pullback. 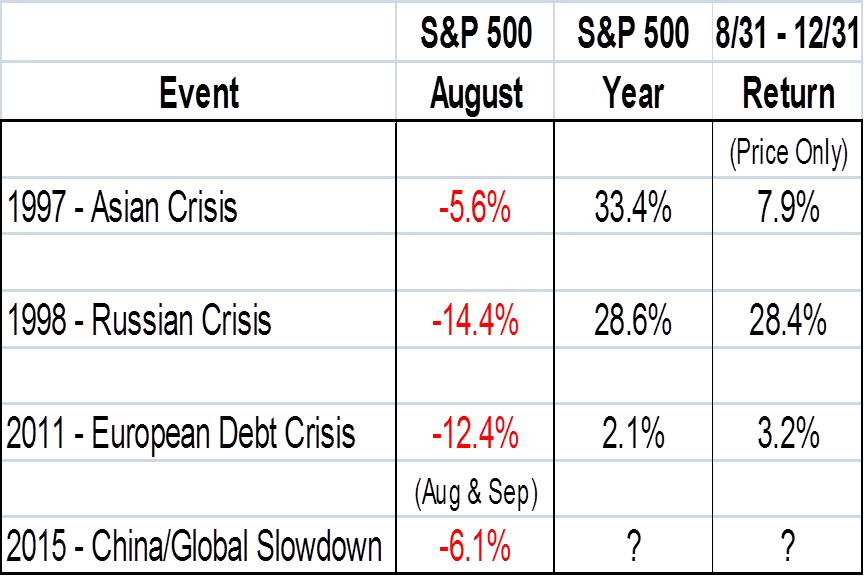 History suggests that, with three-plus months to go to yearend, there is a reasonable chance the market will rebound and we may be at new highs before 2015 is over.  Although a recovery near-term seems within the realm of possibilities, history may not repeat itself.

A “better-safe-than-sorry” approach might be the best fit for your risk tolerance as an investor.  Because the future is always uncertain, we continue to favor defense in high-risk markets and offense in bullish markets.

Nicholas Atkeson and Andrew Houghton are the founding partners of Delta Investment Management, a registered investment advisory firm in San Francisco, and authors of the new book, Win by Not Losing: A Disciplined Approach To Building And Protecting Your Wealth In The Stock Market By Managing Your Risk. Additional market commentary and investment advice is available via their websites at www.deltaim.com and www.deltawealthaccelerator.com

AdviceIQ delivers quality personal finance articles by both financial advisors and AdviceIQ editors. It ranks advisors in your area by specialty, including small businesses, doctors and clients of modest means, for example. Those with the biggest number of clients in a given specialty rank the highest. AdviceIQ also vets ranked advisors so only those with pristine regulatory histories can participate. AdviceIQ was launched Jan. 9, 2012, by veteran Wall Street executives, editors and technologists. Right now, investors may see many advisor rankings, although in some areas only a few are ranked. Check back often as thousands of advisors are undergoing AdviceIQ screening. New advisors appear in rankings daily.