Advisors with Heart Awards
brought to you by 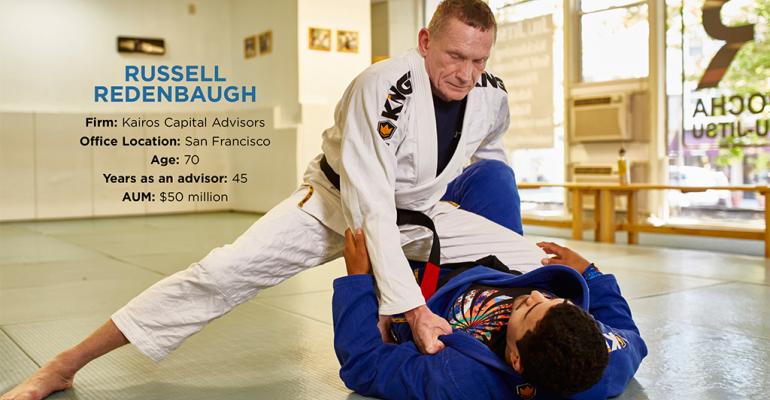 Inspiring Others Out of Adversity

Russell Redenbaugh grew up in suburban Salt Lake City, Utah, during the height of the space race and the nation’s fascination with rocketry. “Nearly every 16- or 17-year-old boy wanted to be an astronaut,” he said, including him.

In 1962 at age 16, Redenbaugh was building a model rocket of his own when it blew up in his face. He lost his sight and six fingers in the accident.

Since then, Redenbaugh graduated at the top of his class in college as well as graduate school at Wharton; he served under three U.S. presidents as a commissioner on the U.S. Civil Rights Commission. He took up the sport of Brazilian jujitsu, winning the world championship in his division in 2003, 2004 and 2005, fighting sighted opponents.

“The thing I found in my life is the difficulty about being blind in America isn’t that it’s so hard,” he says. “It’s that it’s so easy to believe what people tell you when they tell you, ‘Well, you can’t do that, because …’”

In 2002, he launched the Russell Redenbaugh Foundation to inspire others to shift what he calls their “self-limiting narratives.” The foundation provides seed money to a variety of projects so they can demonstrate some success and capture the metrics needed to appeal to more deep-pocketed supporters.

For example, one project involved starting a jujitsu-based self-defense training program for grade school children in Massachusetts. Another involved donating computers to an orphanage in India, where the staff was so inspired by the gift, they built a school for the blind there called The Russell School.

“They came to realize that Indians that are blind could do far more than merely begging,” Redenbaugh says.

Next up is developing an equestrian program for inner-city girls from 10 to 14 in the San Francisco Bay area. So far two horses are in place, but Redenbaugh hopes to create an after-school program to take place two to three days a week.

“The thread that runs through all of these is to shift people’s narratives about what’s possible.”