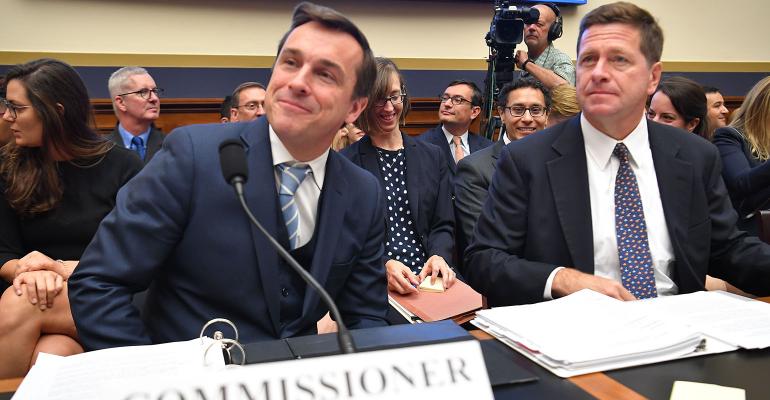 Since joining the SEC in January 2018, Jackson has often led opposition to policies pushed by Chairman Jay Clayton.

(Bloomberg) -- Robert Jackson Jr. said he will step down from the U.S. Securities and Exchange Commission next month to return to teaching, leaving Wall Street’s main regulator with an open Democratic seat as Republicans push to dial back rules before November’s elections.

Since joining the SEC in January 2018, Jackson has often led opposition to policies pushed by Chairman Jay Clayton, including last year’s landmark move to overhaul conduct standards for brokers and investment advisers. At the same time, he and Clayton -- both political independents -- worked together to approve enforcement actions in the face of objections from the commission’s two Republicans.

Jackson’s announcement follows months of speculation over when he would return to New York University, where he is a tenured law professor. While his SEC term technically ended in June, he remained at the agency amid calls from consumer advocates to stay on to push back against the agency’s Republicans.

“Serving on the commission has been the privilege of my lifetime,” Jackson said in a statement. “I will always be proud to have served with my fellow commissioners, Chairman Clayton and especially the commission’s staff, who dedicate their careers to protecting ordinary investors.”

Jackson’s willingness to press for heftier corporate fines helped him develop a reputation as a Wall Street adversary at a time when President Donald Trump’s appointees are rolling back regulations. He’s also used speeches and economic analysis to criticize corporate stock buybacks and dual-class share structures, as well as pushing for disclosures of companies’ political spending.

“Rob has been a relentless advocate for making sure our modern markets remain the fairest and most efficient in the world,” said Kara Stein, a former Democratic commissioner who served with Jackson before stepping down last year. Stein’s successor, Allison Lee, praised him as “thoughtful and supportive colleague” who found innovative ways to use data for public policy.

Jackson’s Feb. 14 departure is likely to give the Republicans a stronger majority at least for a short time. Caroline Crenshaw, an SEC lawyer who’s one of Jackson’s top aides, is likely to be nominated as his replacement, a person familiar with the matter has said. She didn’t respond to a request for comment.

--With assistance from Robert Schmidt.

To contact the editors responsible for this story:
Jesse Westbrook at jwestbrook1@bloomberg.net
Gregory Mott