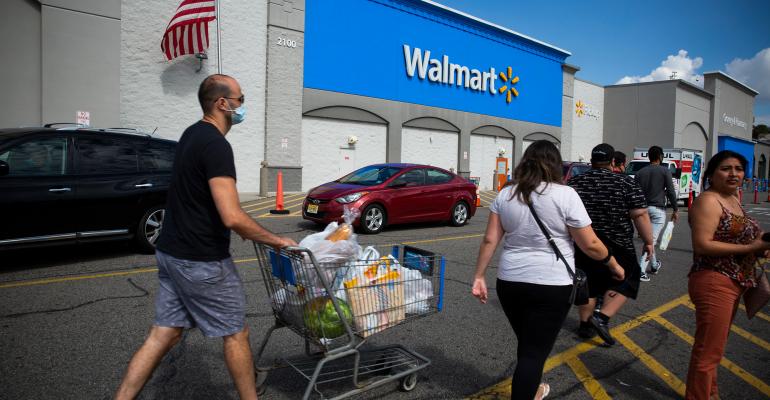 Other venues are easing their mask requirements without getting rid of face coverings completely.

(Bloomberg) --  As Walmart Inc. and a handful of major retailers dropped mask requirements in their stores, some frontline workers are pushing back on concerns that the new policy will bring them greater health and safety risks.

The world’s largest retailer, along with Costco Wholesale Corp. and Trader Joe’s, were among the first companies to ease their mask policy for vaccinated shoppers following a recommendation by the U.S. Centers for Disease Control and Prevention.

Food and grocery workers are concerned that the rule change, which largely relies on a vaccination honor system, brings them greater health and safety risk.

“Essential workers are still forced to play mask police for shoppers who are unvaccinated and refuse to follow local Covid safety measures,” said Marc Perrone, president of United Food and Commercial Workers, a major retail and grocery union. “Are they now supposed to become the vaccination police?”

Perrone called on state governors Sunday to maintain mask mandates in place, following the examples of New Jersey and Hawaii, saying the pandemic is far from over. Governors in many states moved quickly to drop mask mandates for vaccinated people. Still, even with the CDC recommendation, local governments are able to impose tighter restrictions.

“Your anti-vaxxers and anti-maskers are not necessarily going to be honest with people about whether they’ve been vaccinated or not,” Nancy Baxter, head of Melbourne School of Population and Global Health, said on Bloomberg Television, who said the CDC’s move may lead to a surge in infections. “You have this honor system that I think is going to break down.”

Beyond retail, other venues are easing their mask requirements without getting rid of face coverings completely. Walt Disney World Resort made masks optional in common outdoor areas but still require them indoors, on all attractions, theaters and transportation.

Walt Disney Co.’s Chief Executive Officer Bob Chapek said on Bloomberg Television last week that he expects a mask-loosening policy for both customers and workers as its parks ramp up in the crucial summer months. “We think that’s in the future for us -- in the near future, in fact,” he said.

Still, others including Target Corp. and Ikea are holding back, for now.

“Changing our mask policy requires careful consideration and planning,” Ikea said on its website after the CDC announcement, adding that it’s not dropping its mask requirement just yet.

These are the companies that have dropped mask requirements:

Companies that are evaluating the situation or still require masks:

--With assistance from Shery Ahn.