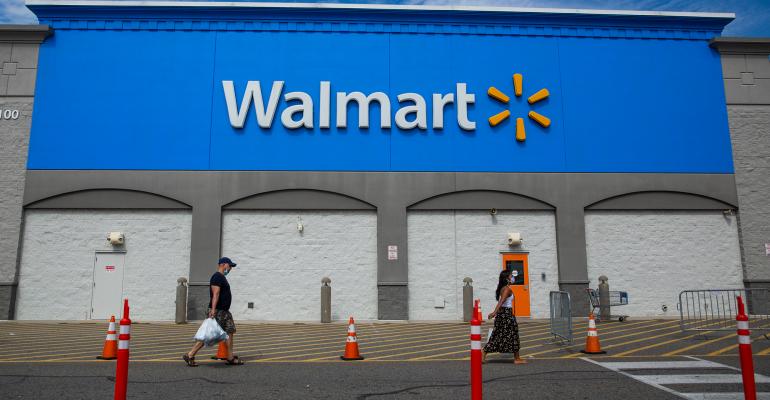 Shifts in spending behavior—when combined with over-ordering earlier this year—have left the people who manage supply chains with a costly mess. Products that don’t entice shoppers sit unsold in stores and warehouses, taking up valuable space.

(Bloomberg)—US retailers that stockpiled goods to cushion against supply-chain snarls are finding inventory reduction to be challenging and costly as American households start to pull back from a two-year spending spree.

With persistently hot inflation and the Federal Reserve raising interest rates, Walmart Inc., Target Corp. and others are seeing consumer preferences shift to basic goods including food and home essentials. At the same time, shoppers are putting the brakes on purchases of furniture and electronics compared with a year ago, Commerce Department data released Wednesday showed.

Such shifts in spending behavior -- when combined with over-ordering earlier this year -- have left the people who manage supply chains with a costly mess. Products that don’t entice shoppers sit unsold in stores and warehouses, taking up valuable space. That’s why big retailers have been working so hard, and paying such a high price, to get rid of slow-selling discretionary items.

Walmart, which saw inventory levels jump by almost one-third in the first quarter, canceled billions of dollars in orders and slashed prices on items such as apparel. In the second quarter, it reduced the number of shipping containers in its system by half to match stockpiles with demand, and inventory growth slowed to 25% from a year earlier, compared with a 32% increase in the first quarter.

Still, “it’s going to take a few more months to work through the backlog,” John Furner, head of the company’s US operations, told analysts on a call.

Inventory was also a hot topic in Target’s earnings call, with executives saying they had mostly worked through the problem after an all-hands effort. But tackling the bloat came at a big cost: The company’s earnings badly trailed analyst estimates as the retailer moved aggressively to reduce the supply of discretionary goods.

To deal with backlogs in external supply chains, Target turned to air freight, automated operations and extra warehousing capacity near ports to mitigate risks. But as demand patterns changed, the retailer cut stock of discretionary goods by more than $1 billion and scaled back orders in the second half of the year.

“The extra inventory would have presented an ongoing burden to our supply chain and store teams as they face the distraction of working around it day after day,” Chief Executive Officer Brian Cornell said.

Big-box retailers aren’t alone in their struggle with stock.

As a result, inventory levels are now more than double what they were a year ago. But as the company sees more supply-chain stability in the second half of the year, it’s preparing to trim the air-freight program.

“At the beginning of the pandemic, we focused on managing low inventories and making sure our core products were in stock,” Boltz said in an interview. “Now, we see a more normalized supply environment and shipments becoming a little less volatile.”

For smaller companies, inventory decisions can mean the difference between staying in business or going bust.

A vast majority of small businesses believe that larger companies have an advantage over them when procuring inventory, and more than 40% of them attribute that to their inability to pay premium prices and limited access to vendors, according to an April survey by researcher Software Advice.

“They don’t have the power of a Target or a Walmart,” said Julie Gerdeman, CEO of supply-chain risk analytics firm Everstream Analytics. “If they miss getting their inventory in for Christmas, there’s a risk of insolvency.”

Those kinds of worries were rampant a year ago, punctuated by a long queue of container ships outside the ports of Los Angeles and Long Beach, California. The situation has improved somewhat, with two of the state’s three biggest ports registering a drop in container imports for a second straight month in July.

The latest seaborne trade figures reflect a US economy where demand is moderating rather than falling off a cliff.

The National Retail Federation, which represents about 18,000 US retailers, has trimmed its forecast and is now projecting imports will fall 1.5% in the second half of the year compared with the same period in 2021. Still, the Washington-based trade group sees a 2% increase in imports in 2022, driven by strong consumer demand amid historic-low unemployment rates and inflated wages and savings in the first half of the year.

“Where would we be if the pandemic didn’t happen?” Strang said. “I actually think we’re about there. That’s where imports have come back down to.”

Do you think inflation in the US has peaked? This week’s MLIV Pulse survey takes a hard look at prices. Please follow this link to share your views.

--With assistance from Brendan Case.