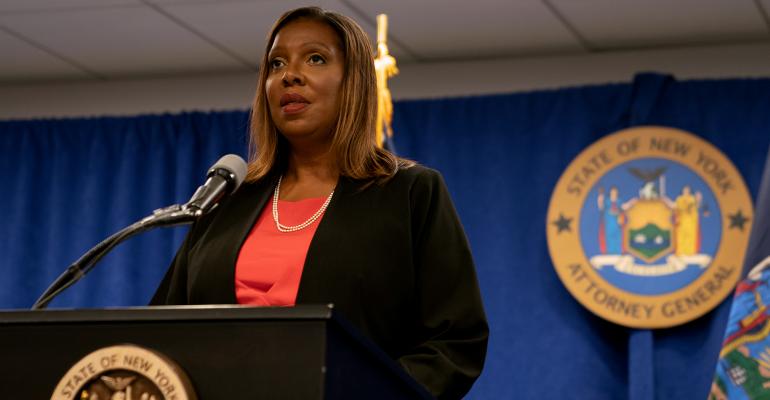 In 2019, Roni Rubinov even signed a lease on a warehouse in which he planned to open a sort of “department store’ of stolen goods, the mayor’s office said.

(Bloomberg)—The alleged ringleader of an elaborate scheme to shoplift luxury goods from Bloomingdale’s, Sephora and other retail outlets and resell them on Amazon and eBay had big dreams, New York authorities said in announcing charges against 41 people.

Roni Rubinov, accused of leading a New York City theft ring that disguised the stealing as isolated “smash and grab” incidents, even signed a lease in 2019 on a warehouse in which he planned to open a sort of “department store” of stolen goods, the mayor’s office said Thursday.

New York Attorney General Letitia James and New York City Mayor Eric Adams revealed the alleged scam at a news conference in Lower Manhattan, where they described a “massive retail theft operation” in which a team of “boosters” fanned out across the city to lift merchandise from stores. The indictment includes charges of criminal possession of stolen property and money laundering.

James and Adams said law enforcement had seized more than $3.8 million in stolen goods from Rubinov, citing more than 550 gift and cash cards. James vowed to “restore an environment where New Yorkers feel safe and secure” and to “protect businesses” in the city and “preserve the rule of law.”

Adams said the bust showed that he “will not tolerate crime -- street crime, retail crime or organized crime.”

“This wasn’t just shoplifting, but people going into stores and clearing off shelves” as part of an organized racket, Adams said. In an apparent reference to criticism of the prosecution of shoplifters, he said “this was greed” and that cracking down on it was not “criminalizing poverty.”

A lawyer for Rubinov couldn’t immediately be identified for comment on the charges.

That sort of collaboration is common in the city, and some retailers even pay NYPD officers to work off-duty shifts in their stores. In fiscal 2021, retailers spent about $32 million on those shifts, a 70% increase from four years before, according to city budget figures.

Retailers have been sounding the alarm about organized theft and large-scale robberies, but it’s not clear how prevalent they are. Theft accounts for an average of 0.07% of sales a year, according to the National Retail Federation. In California, Governor Gavin Newsom has pledged more $250 million to help combat retail theft, and the state attorney general’s office is set to create a unit devoted to it.

Last year, New York City reported its third-lowest total of grand larceny -- theft of more than $1,000 -- in a decade, though Police Department figures for the crime include theft beyond retailers. Still, such incidents are up 52% so far this year.

The state has recently recategorized property theft as a more serious crime. A 2019 law that eliminated cash bail and mandated the release of people arrested for most misdemeanors and nonviolent felonies while they await their court dates was revised in April, after critics blamed the change for an uptick in crime, despite a lack of evidence.

Under the original law, a judge couldn’t hold a defendant on cash bail for shoplifting. With the revision, judges can set bail in some instances.

--With assistance from Erik Larson.