NREI Online
brought to you by 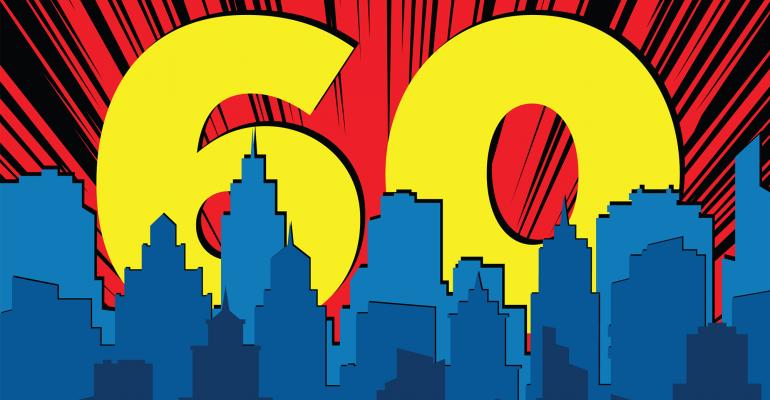 Looking Back on 60 Years of REITs

It's been six decades since REITs first came on the scene and the structure is as vital as ever within the broader commercial real estate universe.

One of the country’s most prominent baby boomers in the business world has aged very well.

Born 60 years ago in the U.S. with a handful of companies, the REIT structure is now a dominant force not only in American commercial real estate, but also now a vehicle that is employed globally. The U.S. alone boasts 222 publicly-traded REITs, and IRS records show that about 1,100 listed and non-listed REITs pay taxes. And REITs now operate in 39 countries overall. Today, the market cap of the FTSE Nareit All REITs Index, the broadest index for equity and mortgage REITs in the U.S., stands at $1.1 trillion.

Related: REITs Fly Under the Radar as a Smart Covid Vaccine Trade

“If the REIT structure were difficult to use and not favorable, you would not expect REITs to spread very widely,” says Calvin Schnure, senior vice president of research and economic analysis at Nareit, a trade organization for REITs. “This is a very successful business model.”

Commercial real estate professionals say the REIT sector continues to spread well beyond what its creators likely imagined back when the median home value was $11,900 and a first-class postage stamp cost 4 cents.

Related: My Life as a Client: Look Before You REIT 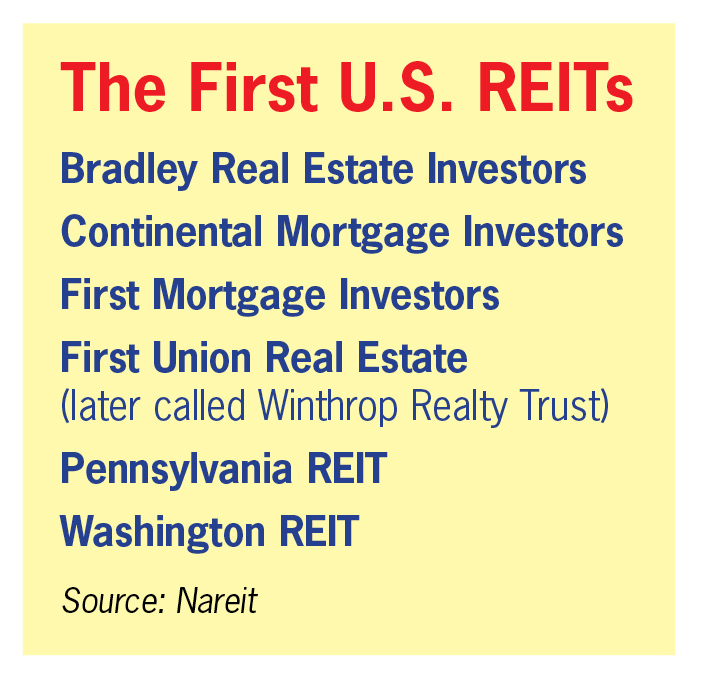 On Sept. 14, 1960, President Dwight Eisenhower authorized the REIT structure when he signed into law the REIT Act, which was tucked into the Cigar Excise Tax Extension Act of 1960. As explained by Nareit, Congress established the REIT model “to give all investors the opportunity to invest in large-scale, diversified portfolios of income-producing real estate.”

Debra Cafaro, chairwoman and CEO of Chicago-based Ventas Inc., a publicly-traded REIT that is included in the S&P 500 and specializes in health care real estate, says the REIT Act ushered in the “democratization” of commercial real estate.

“The idea was to allow the little guy … to invest in commercial real estate, and thereby gain the benefit of that reliable cash flow and appreciation that previously had only been available to very wealthy investors,” says Cafaro, who took the helm of Ventas in 1999.

The makeup of the equity REIT sector also has shifted in recent years. For instance, REITs tied to e-commerce accounted for only 9 percent of the sector’s market cap in 2010, according to Nareit. In 2019, that figure soared to 32 percent.

Getting to that point took a while, though.

Although the REIT model was hatched in 1960 and the first REITs quickly came aboard, it would be more than 25 years before REITs truly caught on.

The Tax Reform Act of 1986 helped fuel what’s known as the “modern REIT era.” The federal law enabled REITs to manage real estate, instead of merely owning or financing it. The 1991 IPO of retail REIT Kimco Realty Corp.—the first IPO of an equity REIT in a number of years—set the stage for modern-day REITs, according to Nareit.

“REITs are an absolutely critical part of the real estate landscape but don’t get the credit they deserve,” says Michael Knott, managing director and head of U.S. REIT research at Green Street, a Newport Beach, Calif.-based real estate research and advisory firm. “These vehicles have provided good performance and a real estate proxy for long-term investors.”

For investors, including REITs in a securities investment portfolio increases returns and decreases risk, and supplies a steady stream of dividends, Cafaro notes. REITs are a “very efficient, very effective way” to invest in commercial real estate, she says.

Until the coronavirus pandemic, REITs were in outperformance mode, Schnure points out. While some segments of the REIT industry have been battered during the pandemic, he says REITs as a whole have demonstrated resilience. REITs are equipped to navigate the current economic crisis because since the end of the Great Recession in 2009, they have reduced their leverage, strengthened their balance sheets and raised equity capital, he says. Those moves put them in a “much stronger financial position,” according to Schnure.

Some REITs actually stand to benefit from the pandemic-induced recession, Schnure says, as they might be able to buy properties that some overleveraged private investors aren’t able to hang onto.

Over the years, the REIT model has been flexible enough to reflect economic changes, says Cafaro, citing the introduction of cannabis REITs and the rise of life science assets. In October, a fund sponsored by Cafaro’s REIT purchased a nearly 800,000-sq.-ft., class-A life science portfolio in South San Francisco, Calif., for $1 billion.

Rexroad says she didn’t envision the depth and breadth of how technology, including data centers and cell towers, would emerge as a major player in the REIT sector. The coronavirus pandemic’s acceleration of e-commerce has pushed data centers and cell towers into the spotlight even more, she notes. REITs that provide real estate for tech tenants now account for 32 percent of the REIT industry’s market cap, according to Nareit.

Of course, e-commerce also has catapulted the industrial sector into the REIT stratosphere. The biggest industrial REIT, San Francisco-based Prologis Inc., now ranks as the No. 2 REIT in the S&P 500 as measured by market cap. At No. 1 is Boston-based American Tower Corp., which owns cell towers and other communications infrastructure. REITs represent about 3 percent of the S&P 500. Prologis alone accounts for 6.8 percent of the equity market cap of the FTSE Nareit All Equity REITs Index.

Looking ahead, Rexroad foresees several trends in the REIT industry, such as gaming REITs delving even deeper into online gaming and lodging REITs expanding their Airbnb-style offerings.

“I think we’re going to start to see real estate have to rethink where their boundaries are,” she says. “Companies will discover as they go forward how they can evolve in a changing landscape.”

However that landscape winds up looking, Green Street’s Knott believes REITs will, as they’ve done over the past 60 years, keep contributing to better transparency and accessibility in commercial real estate investing. Also, he says, the REIT model will continue to enjoy “proud parent” status as a launchpad for innovative real estate owners and operators and as an incubator for niche property types.

“REITs have more than earned a permanent role in portfolios, and the industry should ensure that investors have the REIT opportunity over the next 60 years. If the industry were honest about risk-adjusted returns across public and private vehicles, listed REITs would command an even greater share of the commercial real estate market than they do today,” Knott says.