In March, the Fifth Circuit Court of Appeals struck down the Department of Labor’s fiduciary rule—arguably the most impactful piece of legislation to hit advisors in decades. But Schneiderman’s office, along with two other attorneys general and the AARP, didn’t give up the fight. The state attorneys general filed a motion to intervene in the case late last month, asking the court to rehear it in front of all the judges. The AARP filed a similar motion. Unfortunately, the efforts failed, and the court denied both motions.

In April, Schneiderman announced that thanks to his office’s investigation, 13 mutual fund firms, including Vanguard, BlackRock and T. Rowe Price, have agreed to voluntarily publish for retail investors the “Active Share” metric for all of their mutual funds. Publishing the Active Share—the percentage of stock holdings in a fund’s portfolio that differs from its benchmark index—would “help retail investors determine whether a higher-cost, actively managed mutual fund fits their investment goals better than another, lower-cost alternative,” the Schneiderman's office said in a statement.

3. Letter to the DOL Urging Implementation of Fiduciary Rule
Thinkstock/Stockbyte/Thinkstock

About a year ago, Schneiderman sent a letter to the Department of Labor, arguing against any further delay in the fiduciary rule’s implementation. He said that if the Trump administration kills the rule, a retirement saver “could lose up to 23 percent of the value of those savings over 30 years of retirement due to conflicted advice.” He lost that battle as well, as the second implementation phase of the rule was eventually delayed, and the rule is now likely to be vacated.

Schneiderman went after several brokerages for their sales of residential mortgage-backed securities before the financial crisis of 2008, including UBS, which paid $230 million to settle, the Royal Bank of Scotland, JP Morgan Chase, Bank of America, Citigroup, Morgan Stanley and Goldman Sachs. As of mid-March, he recovered nearly $4 billion in cash and consumer relief in the aftermath of the residential mortgage crisis.

In March, Bank of America Merrill Lynch was hit with a $42 million penalty thanks to Schneiderman, the biggest fine the state had ever levied against a firm over electronic trading practices. He alleged the brokerage mislead clients as to the safety and sophistication of its electronic trading services. And it was routing clients’ stock trades over a five-year period to such firms as Citadel Securities, Knight Capital, D.E. Shaw, Two Sigma Securities and Madoff Securities for execution without clients’ knowledge.

In March 2014, Schneiderman settled with Bank of America and its former Chairman and CEO Kenneth Lewis for $25 million. According to the AG's claims, the bank hid more than $9 billion in losses at Merrill Lynch from shareholders before voting on the brokerage’s merger with the bank. Schneiderman also alleged that Lewis and Joe Price, chief financial officer, misrepresented the financial impact the merger would have on BofA’s future earnings. Lewis was barred for three years from serving as a director or officer of a public company. 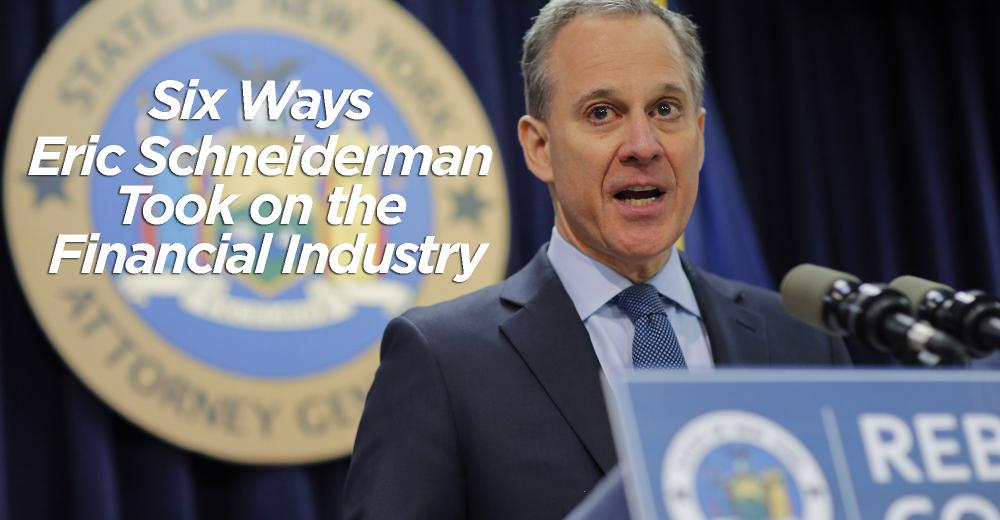