“Billions” is a legal drama at its heart. However, while most shows in that genre focus on splashy criminal cases, this is based loosely on former U.S. Attorney Preet Bharara’s battles with a crooked hedge fund manager. Later seasons deal with such crowd-pleasing topics as bond market manipulation. While “SEC Enforcement Actions: The Show” doesn’t sound like the most exciting pitch, “Billions” embraces its soapy nature and keeps things loose (read: suitably ridiculous) while tackling its advisor friendly (or unfriendly, depending on your point of view) subject matter.

It’s right there in the name. This story of high-net-worth family conflict and betrayal is perhaps the most “realistic” show on this list (though that’s, admittedly, a pretty low bar). The titular Pierce family is based heavily on the stories of real-life media moguls, such as the Redstones, Murdochs and even Trumps. Indeed, according to a Vanity Fair article, "Succession's" creator, Jesse Armstrong, based the show on a decade-old script he created that was literally called "Murdoch." The lessons, and warnings, this show presents for advisors come fast and furious, and are too numerous to recount here. But suffice it to say that spending some time with the detestable Pierce children as they jockey for position in the struggle to establish themselves as the heir apparent to their somehow even more odious father’s media empire is time well-spent from both an entertainment and educational standpoint.

Beyond the obviously blended family, and the challenges that can present that forms the heart of this award-winning series, it also includes drama (and humor) surrounding the family business, Pritchett’s Closets and Blinds. In the beginning, Jay Pritchett, the family patriarch, owns and runs the business, but ultimately passes it along to his daughter Claire when he retires. The shenanigans involving the business provide some lessons on family business management and succession. As far as we can tell, Jay never discusses his intentions with Claire, but rather tricks her into wanting to take over the business by pretending to offer the CEO position to a non-family member. He says he was testing her to see if she would fight for the position. Once she does become CEO, he often meddles in her decisions, creating chaos.

Who’s considered to be part of the family? As "Jane the Virgin" illustrates, modern technology may lead to unusual situations (to say the least). At the start of the series, Jane (a virgin) is studying to be a teacher and engaged to a detective. She lives with her mom (who had Jane when the mom was just 16) and her grandmother and works as a waitress at the Marbella, a fancy hotel. One day, Jane goes for a routine clinic visit, and the doctor accidentally inseminates her with a specimen meant for another patient. Needless to say, Jane becomes pregnant, and the father is none other than the son of the hotel’s wealthy owner.  As you can imagine, complications ensue, especially after Jane gives birth to a baby boy. The show brings to light what happens when an “accidental” family is created with a large difference in wealth between the two sides of the family.

The main plotline of "Empire" is centered around family patriarch Lucious Lyon’s struggle, after being blindsided with a diagnosis of terminal ALS, to choose a successor from among his three sons to take over his entertainment conglomerate. This conflict represents perhaps the most common issue that estate planners encounter when dealing with high-net-worth family business owners. Often, the first-generation wealth creator is so consumed with growing and maintaining his life’s work that he fails to consider who will manage it when he no longer can, let alone the consequences of a botched wealth transfer. Many such driven individuals fail to even recognize the simple fact that a day will eventually come when they won’t be able to manage the business… until that day inevitably comes, of course. It’s tempting to call Lucious foolish for failing to prepare for this eventuality. However, it’s important to realize that in his mind, and the minds of many wealth creators like him, he and Empire are one and the same. That one could exist without the other is an anathema to the self-determined ideals that helped him build the business in the first place.

Also, before it heads decidedly off in its own direction, this show is basically King Lear. Just as the Bard intended.

Long-time readers will know we’re huge fans of "Game of Thrones" and the many, many lessons it has to offer advisors. To choose just one, and try to avoid major spoilers, let’s take the death that kicks off the show’s massive race for the throne—King Robert Baratheon’s sudden demise. There are many lessons people can take from Robert Baratheon (conquerors don’t make good kings, alcoholism can kill, etc.), but perhaps the most important: Don’t allow clients to attempt to write wills themselves. It’s too easy to make a big, costly mistake. In Robert’s case, when writing the will, Ned Stark replaces "My son Joffrey" with "my heir" because the king's eldest son is, actually, a bastard. The will, and Ned Stark’s subsequent actions, tip off the aforementioned struggle for the throne that costs the lives of thousands.

Ask any advisor, and they’ll tell you that nobody better represents the financial advice industry than “The Rock.” OK, so most advisors don’t look like Dwayne Johnson (except in their minds), but “Ballers” offers the rare series with a financial advisor as the main character—Johnson’s NFL linebacker turned advisor Spencer Strasmore. The series follows Strasmore’s attempts to build a practice using his famous friends and the other contacts he made during his NFL past. While it pretty quickly veers off into “Entourage” territory, there are still major plotlines surrounding Johnson’s conflicts with his business partners and his general struggle to best serve the sort of demanding high-net-worth clientele that many advisors aspire to gather. It also touches on the challenges professional athletes face managing their finances. “Ballers” isn’t exactly Faulkner, but it’s fun advisor wish-fulfillment nonetheless.

This little-known series on STARZ is a bit of a hidden (trashy) gem. Two estranged sisters, Emma and Lyn, return to their old neighborhood in Boyle Heights, Los Angeles, after the sudden death of their mother Vidalia (the titular “Vida”). On their return, they meet Vidalia’s “roommate,” Eddy. Eventually it comes out that Vida was, actually, married to Eddy. To complicate matters further, Vida willed 30% of the ownership of their family-owned bar to Eddy and split the other 70% between Emma and Lyn. Suffice it to say, blended family drama ensues. 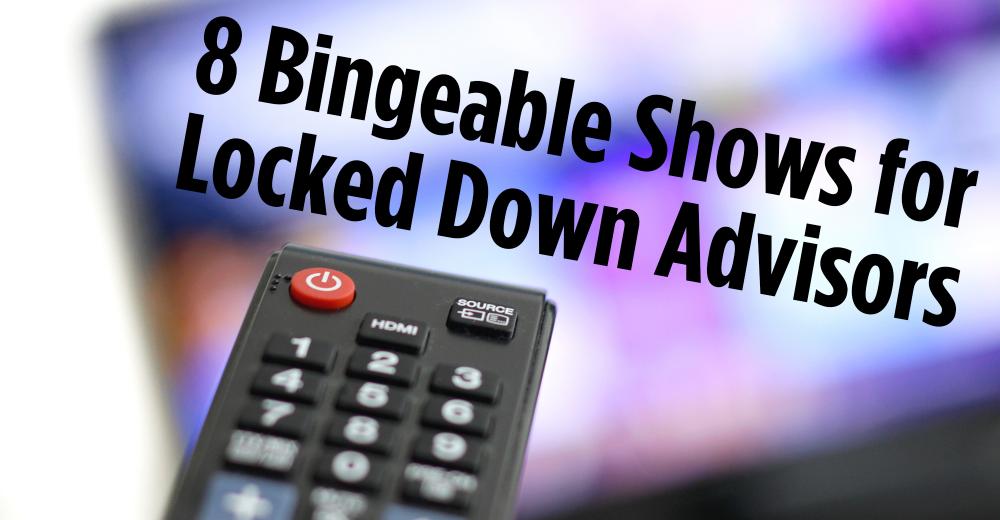 Next Up
The 20 Most Expensive Luxury Real Estate Markets in the U.S.
Start Slideshow ›