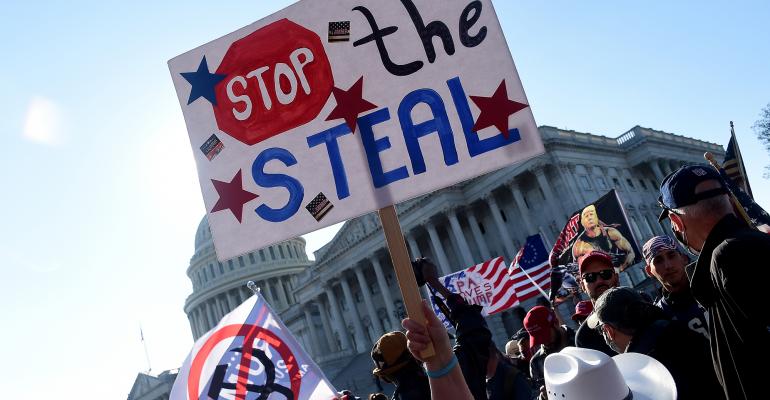 Republicans denying the 2020 election are easy prey for mischievous economic messaging. The University of Michigan’s national Consumer Sentiment Index plummeted 50% under Biden to an all-time low.

(Bloomberg Opinion) -- With about 70% of Republicans believing incorrectly that Joe Biden lost the 2020 presidential election when he won it by more than seven million votes, it's no wonder sentiment is similarly skewed against the 46th president, contributing to his low approval in public opinion polls.

Never mind that the deaths related to Covid-19 plunged 78% from the first to the second quarters, that 10 million new jobs have been created, that unemployment at 3.5% represents a 53-year-low, that corporate earnings rose to a record and that the confidence of chief executive officers remains above its long-term average. Not to mention that total household net worth soared by $18.1 trillion in 2021, the most under any president, while Congress in 2022 passed the biggest ever infrastructure bill and the first gun safety law in 30 years.

Seemingly indifferent to these positive developments, the University of Michigan’s national Consumer Sentiment Index plummeted 50% under Biden to an all-time low, primarily due to Republicans' disapproval of an economy led by a Democratic President. Since 2006, when such data was introduced, Republicans routinely feel worse when they lose the White House. Democrats also aren't as approving when their party isn't occupying the Oval Office. But in contrast to Republicans, Democrats' confidence correlates closely with rising and falling gross domestic product and unemployment trends, according to data compiled by Bloomberg. 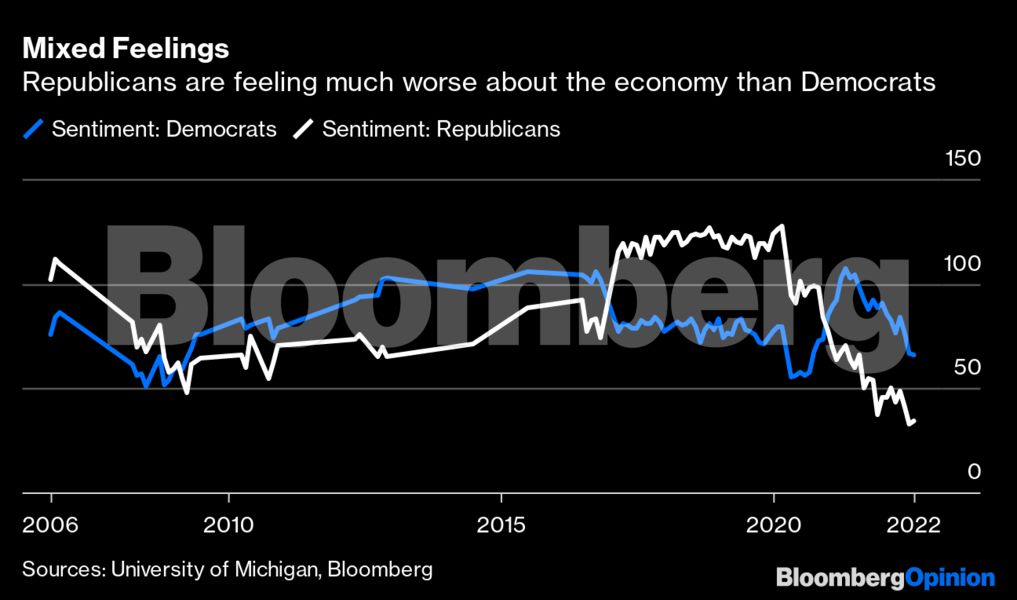 When Covid-19 shuttered the economy in early 2020, prompting gross domestic product to shrink 9.1%, non-farm payrolls to drop 14%, earnings by Russell 3000 companies to be wiped out, falling from $73 per share to a loss of $10, and CEO confidence as tracked by the US Business Roundtable to tumble 55%, every segment of the Michigan index, including Democratic and Republican sentiment alike, plunged.

As GDP reversed course, accelerating from its 9.1% contraction to an advance of 12.2% as non-farm payrolls rose 13%, Russell 3000 earnings rebounded to an $80 gain and CEO confidence surged 240%, consumer sentiment among Democrats climbed in April 2021 to its highest on record. Republicans, suffering the November presidential election, the January 6 (failed) insurrection Donald Trump helped initiate and Biden's inauguration during this period, were having none of it; their dour sentiment weighed on the Michigan index as it plummeted to a record-low reading of 50 in June, according to data compiled by Bloomberg.

Only recently, when GDP slowed and contracted in the first and second quarters, did Democratic sentiment drop below its longer-term average. To be sure, the highest cost of living in 40 years, as measured by the Consumer Price Index at 9.1%, is punitive to the least affluent voters -- the traditional base of Democrats -- and Biden now faces the double jeopardy of persistent inflation and increasing chances of recession as the Fed tightens credit by the most since the 1980s.

Republicans denying the 2020 election are easy prey for mischievous economic messaging. As soon as the Commerce Department said July 28 that the economy contracted for a second consecutive quarter, the Fox Business channel declared, “We are officially in recession.” With unemployment hovering at a half-century low and members of the benchmark S&P 500 Index on track to post record profits for the second quarter, there is no “official” recession until the nonpartisan economists of the National Bureau of Economic Research declare it. 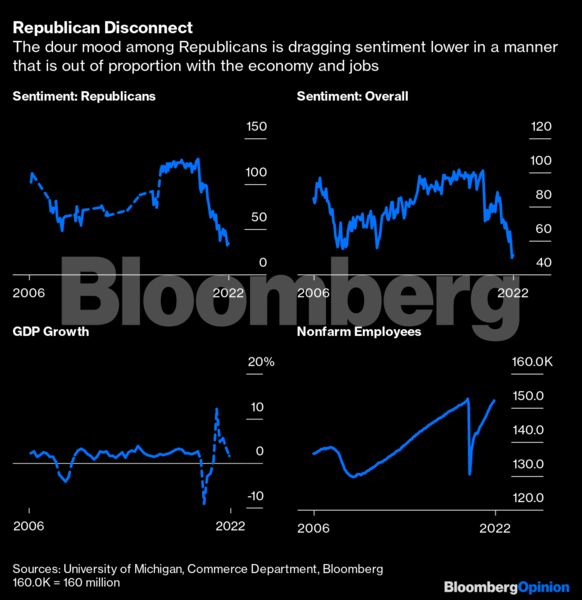 “When you look at the economy, job creation is continuing, household finances remain strong, consumers are spending and businesses are growing,” Treasury Secretary Janet Yellen told reporters the same day Fox and the Republican Party said otherwise. Yellen attributed GDP's second quarter decline in part to bloated business inventories. Recessions typically are characterized by companies closing their doors amid mass layoffs. “That is not what we are seeing right now,” Yellen said. Employment rose by 1.1 million jobs in the second quarter, compared with the average loss of 240,000 in the first three months of past recessions, she noted.

While dismal consumer sentiment dominates the news (the ubiquitously-reported surge in gas prices in June have since declined more than 75 cents a gallon), “President Biden has slowly but substantially re-engineered significant parts of the American economy — achievements obscured by COVID, inflation and broad disenchantment,” wrote Mike Allen of Axios. “Piece by piece, Biden has pumped billions into infrastructure projects, helped revive the domestic semiconductor industry, and accelerated U.S. viral research and vaccine production capabilities. He might be on the cusp of the biggest domestic clean-energy plan in U.S. history.”

That remains to be seen. But the climate-tax legislation sponsored by Democratic Senators Chuck Schumer and Joe Manchin helps Biden slow inflation too, according to former Treasury Secretary Larry Summers, who was among the first to predict the resurgence of inflation after the American Rescue Plan Act of 2021. Summers is part of a bipartisan group of five former Treasury secretaries who endorsed the bill on Wednesday.

While such spending exacerbated inflation - “the overshadowing topic of the day” when Americans are exhausted from their battles with viruses - Biden is changing the trajectory of the economy in myriad ways benefiting American consumers that are “highly consequential,” Allen of Axios writes. The $280 billion Chips and Science Act, for example, will enable much greater manufacturing of computer chips in the US, eventually lowering the price of cars, dishwashers and other household appliances.

None of this is apparent in the Michigan sentiment index, perhaps because Republicans running for office across the country in 2022 are still denying the results of the 2020 election.

Meanwhile, Biden is doing exactly what he promised the 81 million people who voted for him, including higher paying jobs and money for roads, bridges and internet in rural areas from the infrastructure act. And he's succeeding against the odds with some semblance of bipartisan support -- something sadly missing in consumer sentiment.

--With assistance from Shin Pei.

To contact the author of this story:
Matthew A. Winkler at mwinkler@bloomberg.net