ADVERTISEMENT
shutter_m/iStock/Getty Images
“The next time you feel like showing off . . . Don’t!”
Marvel Enterprises

Superheroes know when to dial it back. When they use their superpowers for petty purposes, they usually regret it. The lesson for advisors: Keep it simple and avoid showing off. First, clients and prospects don’t like it when you try to prove how clever you are. Second, they really don’t like it when you recommend products they can’t understand.

Heed the wisdom of Charles Xavier (Professor X), the leader of the X-Men. Professor X reprimands the superhero Pyro for setting ablaze the clothing of a snotty teenager in a shopping mall. Superheroes don’t have to prove anything. Professor X’s rebuke applies to too-smart-for-their-own-good superheroes and advisors alike.

“No amount of money ever bought a second of time.”
Marvel Studios

Iron Man (Tony Stark) is actually quoting his father here, a genius inventor who valued making money over building a relationship with his son. It’s a statement of regret and misplaced priorities. Yes, Howard Stark secured Tony’s financial freedom. But too late he realized that by spending so many hours working, he missed out on building a close bond with his son. The line offers the hope that in some alternate time line, the father and son get to have the relationship they both wanted. Advisors do their clients a service when they remind clients that time—and the relationships they make possible—is the one asset that cannot be purchased or replaced.

“. . . in times of crisis, the wise build bridges, while the foolish build barriers.”
Marvel Studios

Black Panther, the protector of the prosperous kingdom of Wakanda, struggles to choose between isolationism, hiding the kingdom behind its own borders from the troubles of the nations surrounding it, or choosing to share Wakanda’s massive resources with its neighbors. Ultimately, Black Panther chooses sharing. In that choice, he secures Wakanda’s future. In times of crisis, advisors are faced with a somewhat similar struggle: Hunker down out of fear and paralysis (avoid clients, build barriers) or embrace the new reality and adjust investment strategy (increase communications, build bridges). Advisors do well when they model building bridges instead of erecting barriers.

“What one does with the truth is more difficult than you think.”
DC Films

Taking action in the face of difficult truths is the basic job description of superheroes. What is true for superheroes is true for advisors. Facing the truth and acting on it may be the toughest challenge in the world. Every advisor has experienced Wonder Woman’s observation that when it comes to the truth, it often takes superhero courage to decide what to do about it.

Wonder Woman was created by the American psychologist and writer William Moulton Marston (pen name: Charles Moulton). The character’s first appearance was in All Star Comics #8 (DC Comics 1941). Hailing from the island nation of Themyscira, Wonder Woman’s official title is Princess Diana. When blending into the society outside of her homeland, she adopts her civilian identity of Diana Prince. The movie received praise for its direction, acting, visuals, action sequences and musical score.

“If you’re good at something, never do it for free.”
Warner Bros. Pictures

The Joker’s quote validates the truth that every professional has something they are really good at. If advisors can channel that passion into skills that help other people, then that is a superpower of inestimable value. It is right and fair that financial advisors who can consistently deliver such value shouldn’t give it away. The Joker’s point, moreover, is that doing something of value for free actually diminishes its perceived value. If you don’t put a value on your skills, why should clients? So never apologize for charging for what you are good at.

“You want to climb out of the hell you’re in, do the work!”
Marvel Studios

Falcon
The Falcon and the Winter Soldier (2021)

Falcon’s quote reminds advisors that when all their positions look hopeless, there is only one path out. There is no substitute except rolling your sleeves up and doing the work. Determine what went wrong, figure out how to correct it and do the work of moving forward. That is the work of superheroes and advisors alike.

Maybe it takes a superhero from Mars to remind clients and advisors alike that they are in partnership for one reason and one reason only: to secure the future on behalf of clients. It’s a fact that the path to the future is unclear, often frustrating, and occasionally heartbreaking. Still, as Martian Manhunter (also known as J’onn J’onzz) reminds us in this comic book, it’s for the sake of the future that clients and advisors put their hearts and minds together.

“There is a right and a wrong in the universe, and the distinction is not hard to make.”
DC Comics

Trust Superman to cut to the chase. Discerning between right and wrong doesn’t require a panel of attorneys and compliance officers. The stakes may be high. Clients may pressure advisors to cut corners. Financial products may try to obscure the distinction between right and wrong. Superman insists that it doesn’t require X-ray vision to tell right from wrong. Superman insists that if advisors take a step back and listen to their gut, they usually get it right.

“You can’t foresee all the consequences of your actions, but that’s no excuse to do nothing.”
DC Comics

Every advisor should consider hanging on their office wall a poster of The Green Lantern uttering this immortal wisdom. As true for superheroes as for financial advisors, the reality is that no one can foresee all the consequences of an investing decision. Yet for all of that uncertainty, doing nothing is never the answer. Financial advisors, like superheroes, have clients to serve and a mission to accomplish and that sometimes requires superhero courage and resilience.

Every client and every advisor will lose money and feel lost. That’s inevitable in the investing world. The difference between ordinary and superhero investors is the latter will shake off the losses, learn from their setbacks and recommit to the path. This quote, from Charles Xavier (Professor X), the founder and leader of the X-Men, reminds advisors that stumbling is an inevitable part of the profession. There may even be merit to losing once in a while if important learning results. Above all, failure is not an indication of permanent defeat. Advisors serve their clients well when they help them understand that stumbling is an inescapable part of the journey on the road to meeting their ultimate financial goals. 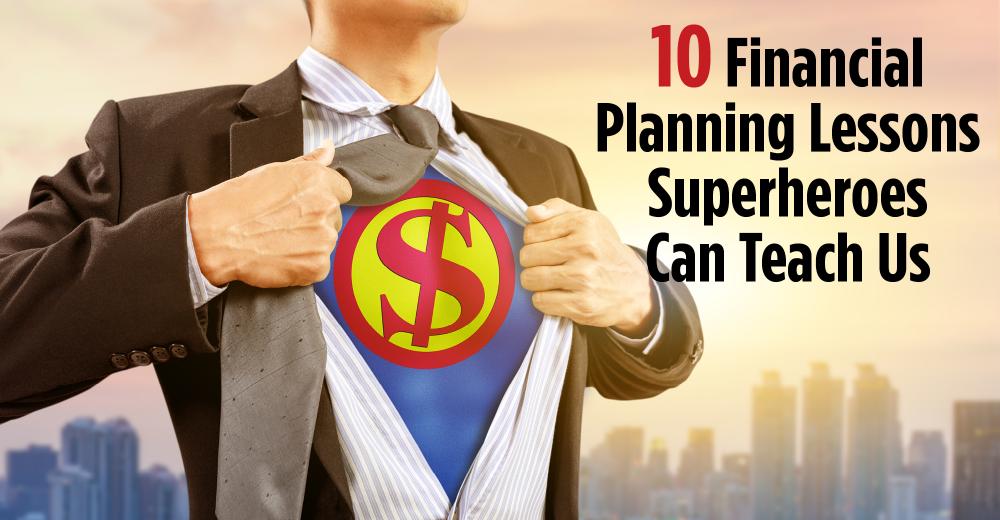