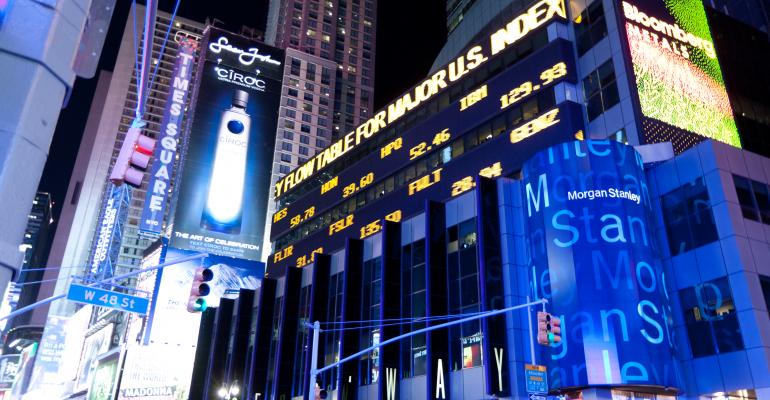 Overall, the bank’s net income nearly doubled from a year earlier, coming in at $0.84 a share, $0.65 when adjusted for debt valuation. Predicted net income was $0.54 a share, according to Seeking Alpha. Morgan Stanley's revenues of $8.9 billion was a 12 percent increase from the $7.95 billion reported a year ago, and up 3 percent sequentially.

“Morgan Stanley has delivered another quarter of earnings growth and strong performance based on consistent execution for our clients. We are well positioned to create superior returns for our shareholders, particularly as the U.S. economy continues to strengthen,” CEO James Gorman said in a statement Friday.

The wealth management business saw pre-tax profits of $836 million in the third quarter, up almost $168 million, or 25 percent, from the pre-tax income levels reported a year ago. Revenue in the wealth management division rose 8 percent year-over-year, reaching $3.8 billion from $3.5 billion in September 2013. Compensation expenses increased to $2.2 billion, up from $2 billion a year ago, but non-compensation expenses were down during the third quarter to $767 million from $796 million in September 2013.

The firm reported overall client assets at $2 trillion, essentially flat from last quarter. Asset management fee revenues hit $2.2 billion, an increase of almost 14 percent from a year ago. Morgan Stanley attributed the growth to an overall increase in the firm’s fee-based business, which now makes up 38 percent of total assets.

Client assets in fee-based accounts hit $768 billion, up 18 percent from September 2013. The wealth management unit reported fee-based asset flows were $6.5 billion for the quarter, down from the $12.5 billion reported in prior quarter. Morgan Stanley’s Chief Financial Officer Ruth Porat attributed the decreased activity to “timing issues,” saying there were no special factors.

Morgan Stanley saw a net loss of over 150 financial advisors (about 1 percent) during the third quarter, reporting 16,162 reps were with the firm. Advisor production was up 2.5 percent; annualized revenue per advisor was a record $932,000, up from the $908,000 reported last quarter. Total client assets per advisor hit a record-breaking $124 million, up 13 percent from the prior year.

Looking ahead, Gorman took a moment in an earnings call Friday to outline the firm’s outlook going forward, calling it the “bottom of the fourth” inning for Morgan Stanley.

“The management team has been together here for five years, and while we have accomplished a number of things, there is clearly still more we can do In short, we do not think this firm is close to reaching its full potential,” he said.

“With the current regulatory paradigm, having a client-centric business model is key to sustainable success. The opportunities in front of us are based on increasing client penetration and accelerating new client acquisition,” Gorman said, noting that included initiatives such as building on Morgan Stanley’s position in cross-border M&A transactions, growth of the bank in both wealth management and institutional securities and use of technology to improve the efficiency of client services.