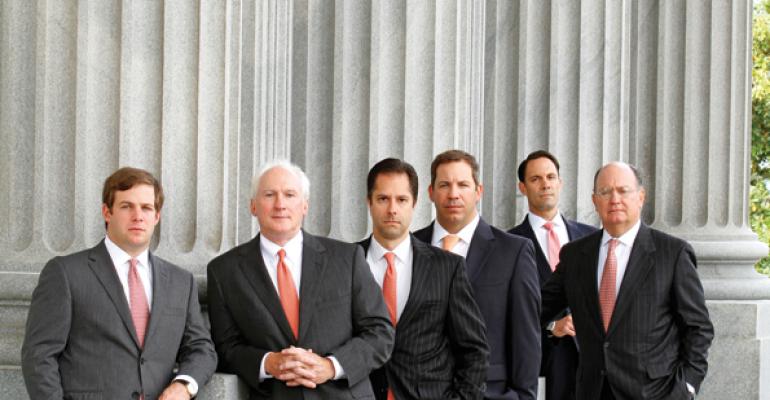 Remember Oct. 19, 1987? That was the day the Dow Jones Industrial Average lost 22.6 percent in one trading day. That was a Monday and by that Saturday, J. Hagood Ellison Jr. and E. Robertson Kibler, both Merrill Lynch financial advisors, were huddling to change their business models. Back then, the classic brokerage model reigned: stock picking for commissions.

“Selling 100 shares of Duke Energy, that’s not the way to run a business,” says “Bud” Kibler. As a direct result of the crash, the two brokers decided to form a team. “We didn’t know if it was gonna work. But we did know the old way doesn’t work.” So the two began to focus on a consultative model and not a transactional one. By January 1988, the transition was complete.

The two decided to avoid “speculative product” and court “conservative money,” as they put it. “We stumbled along for a few years,” says Ellison. “Back then there was no mold, no support [for consultative teams]. Now there is a whole department [at Merrill to help].”

To say that the business model was ahead of its time is putting it mildly. The two principals believe there were perhaps just three other Merrill teams at the time. The two principals hired Richard Migliore, who specializes in investment strategies for HNW individuals, retirement plans, and endowments and foundations, in 1994. The most recent hire was made eight years ago.

Today the firm has 17 team members, six of them FAs, whose expertise vary from certified financial planning to wealth matters for executives serving public and private companies. The firm’s business is made up of about 60 percent HNW individuals, 30 percent retirement plans and 10 percent  foundation assets. In addition, the firm is affiliated with two CPA firms. In South Carolina, it is illegal to share fees with attorneys, but the firm does keep up with who the important attorneys are in their area and knows which attorneys work with their clients.

This year, the founders have begun to share fees with the four other partners. The fees are not split equally, but at a certain threshold, above a certain point, the fees are equally split, says Kibler. Each FA has an area of expertise, but  all six FAs are equally responsible for growth.

The FAs say they tend to lean conservatively, but of course, they run assets according to each client’s own needs—from income to growth to total return. “Our clients are more interested in staying rich than becoming rich,” Ellison says.