/sites/all/themes/penton_subtheme_wealthmanagement/images/logos/footer.png
Recent
Recent
5 Simple Tips To Becoming a LinkedIn Pro
May 13, 2022
Growth by Design
May 13, 2022
Envestnet Wraps Advisor Summit, Announces Truelytics Deal
May 13, 2022
Jolt! 2022: Carl Richards on Simplifying Financial Jargon to Improve Client Communications
May 13, 2022
Featured
The 10 Best and 10 Worst States in Which to Retire in 2021
Jul 15, 2021
Poll: 15 Classic Books on Investing and the Markets
Apr 03, 2020
Fifteen Must-Listen Business Podcasts for Advisors
Aug 14, 2020
Celebrity Estates: Jay Leno and Planning for Classic Car Collections
Feb 22, 2022
Viewpoints
brought to you by
News

Until Friday of last week, the “normalization expectation” had stayed in full swing.  In Bondland, bears set their sights especially on the two- to three-year part of the yield curve.  The tapering tumult of 2013 hit the five- to ten-year points on the curve, especially until they moved to their ten-year averages against their shorter- and longer-maturity neighbors. The belly of the yield curve became attractively cheap as a tapering pace finally was formally announced by the Fed.  Chart 1 shows recent Treasury yield curves, as well as the 200-day high and low.

Bad Things Happened in Threes.  Denizens of Bondland like nothing better than to push the Fed’s resolve.  It is an occupational duty it seems.  So, with the taper all baked in, the next fight to pick was over the unemployment and inflation rate thresholds and the expected timing of the first policy target rate hike.  The December FOMC minutes reinforced the message that communications policy (i.e., the “jawbone) would remain the preferred way to signal markets the intent to, in effect, treat the 6.5% unemployment rate threshold as only a soft signal for discussion of a rate hike.  In fact, almost from the start of the threshold guidance, Fed leadership has undermined it, saying, almost with a nudge and a wink, that when the unemployment rate reaches 6.5%, the FOMC will talk about a hike.  This can be perceived as weak resolve, so the market set out to start testing it.

Implied in the “normalization expectation” is not only a return to long-run measures of output, inflation, and unemployment but a return to orthodox monetary policy.  Yet the median FOMC forecast for the Fed funds rate at the end of 2016 is 1.75%.  That is well below the 3.38% rate calculated using the Taylor rule with the FOMC’s own forecast data to develop the model inputs.

Now, the Taylor rule could quite easily turn out to be one of those nice economic constructs (like using the monetary aggregates to forecast Fed action in the 1980s) that works for only a certain time in economic history.  For Taylor, it could be that it nicely describes the policy rate path for the 1990s through 2007 but that’s it.  But Bondland bears will not give up Taylor without a fight.  Through the prism of an policy rate construct like Taylor, the FOMC forecast tells us the Fed expects to continue to break orthodox rules even three years from now, when it expects the chief economic measure to be close to long run expectations.  That is, the economy will be near-fully normalized but not monetary policy.  Markets recognize the obvious contradiction between FOMC economic and policy rate forecasts, and know something may have to give at some point.

So over New Year’s break, bond bears said, “Why not start probing today?”  The game du jour in this young year has consisted of pushing the three-year T-note yield to within 10 bps of 200-day highs, or nearly two standard deviations cheap when measured over the last 50 or 200 days of trading.  Within the yield curve, investor selling pressure, new supply, and the roll to the new issue conspired to push the yield to ± 2 standard deviations cheap[i] to its nearby two- and five-year neighbors.

Let’s assume you stretched for yield in the three-year note because you expect near-zero savers rates until at least mid-2015.  If the Fed starts to hike as you expect, at that point in time you would own at maximum an 18-month Treasury with very little price volatility.  But what if the Fed broke its promise and embarked on rate hikes sooner than that?  Well, that three-year note you bought might move more in price than expected.  So that area of the curve is a bit vulnerable to this sentiment.

Surprise!  Surprise!  Of course, the best-laid plans of the short-coupon bears were dealt a blow when the 74,000 December payrolls figure came in almost three times below consensus.  It was analogous to Private Pyle yelling “Surprise! Surprise!” at Sgt. Carter after the beleaguered Carter discovered Pyle’s latest mess.  In reaction to the surprise, short coupon yields retreated along with yields throughout the rest of the curve.  Bondland bears who got a bit carried away with the “normalization expectation” suffered some singed fur.

We mentioned in recent issues that the trend of positive economic surprises was extended and might be due to roll over a bit.  Given recently upgraded economic forecasts it will be easier for upcoming data to undershoot the consensus.  The December payroll figure might just be a blip that will be greatly revised next month.  Or maybe it is time for the trend of positive economic surprises to revert toward the mean a little.

Chart 2 shows some key labor market measures, including the new December data.  The unemployment rate fell 0.3 points to 6.7%.  If the Fed really took seriously the 6.5% unemployment rate threshold, this data point would have created worry and a bearish reaction in bonds.  But, as mentioned above, key Fed officials have undermined the threshold almost since announcing it last year.  In addition, 0.2 of the 0.3 point drop in the December unemployment rate can be attributed to another decline in the labor force participation rate (LFPR, not shown in Chart 2).  The LFPR at 62.8% matched the October reading, and these are the lowest readings since the Carter years.  Fed leadership is looking for the unemployment rate to drop because more people are working, not because more have dropped out of the labor force. This is an important distinction. 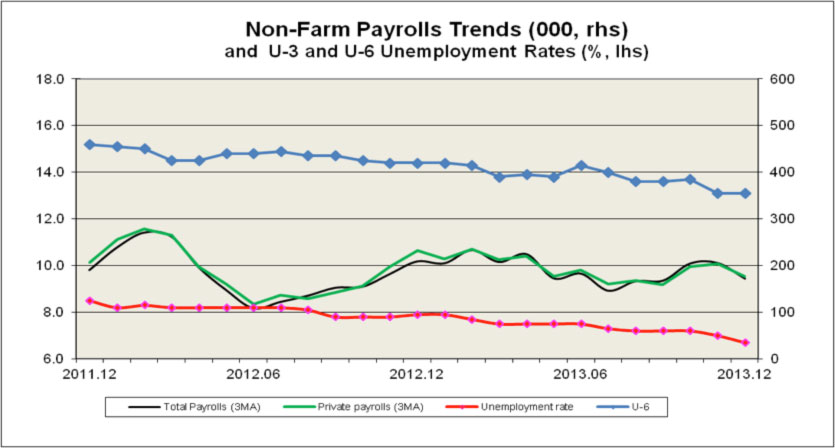 CIM Outlook.  We expect the economy to experience some drag from restrictive fiscal policy in an environment of dysfunctional federal governance.  The risk of a strong adverse shock from fiscal policy in 2014, however, has been mitigated because of the coming November mid-term elections.  The economy is in a sub-par economic expansion and not fully recovered from the severe financial crisis.  We expect the economy to tend to post sub-trend growth rates with low inflation and an improving but soft labor market.  For full-year 2014, there is a fair chance the rate of GDP growth could fail to reach 2.5%, below the 50-year average of 3.1%.  But there is more reason this year to be optimistic that the long run average finally can be met this cycle.  The output gap, however, could take at least two years to close under the FOMC’s generally optimistic forecast.

Under the Janet Yellen-led Fed, we expect monetary policy to continue on the same general course set under Ben Bernanke.  Next year, two Board of Governors seats must be filled, an existing Governor’s term extended, and a new Vice Chair appointed.[i]  That process will be easier after the recent change in Senate filibuster rules and the appointees should be Yellen policy allies.  On the other hand, there will be two policy-voting hawks on the FOMC in 2014, versus one this year.  As a result, we could see two dissenting votes on FOMC decisions in 2014.  The Fed’s December decision to taper could tame the hawks for a while.  We might, however, see a policy dove dissent in 2014 as occurred with the December FOMC decision.

Given our outlook that economic growth should be somewhat adversely influenced by federal fiscal restraint, and with the economy still experiencing excess capacity, we expect tapering of QE3 to occur slowly over the course of 2014.  The Fed will continue to signal to markets, through strengthened forward guidance, to expect a first hike in the policy target rate no earlier than later in 2015.  The market will challenge this guidance from time to time.  It would take a financial crisis or convincing evidence of a recession and/or deflation threat for the Fed to re-accelerate the quantitative easing or engage in another form of easing.

[ii] Stanley Fischer is reported to be President Obama’s nominee for Vice Chair.