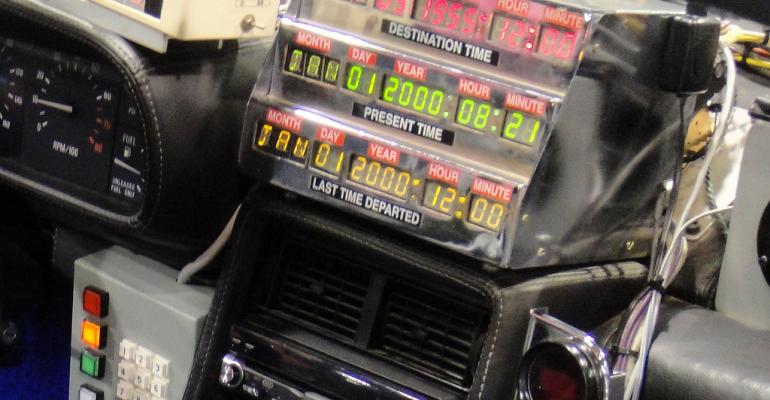 Back to the Future (This Time for Real)

As investors keep finding themselves engaged in discussions over defining the right time horizon, the topic of long-term investing, as typically suggested, is clearly of benefit.

We are writing from the year 2015, October 21. I am sure there is a lot going on in your lives today, but let’s not forget about Marty McFly’s “Back to the Future” (BTF) time travels. On this rainy afternoon (until at least 4:32pm), McFly arrived thirty years into his own future—a world that did not require roads to accommodate a fleet of flying cars, made skateboarding effortless, and suggested a rather questionable fashion regime. No one needs to come from the future to know that there are already plenty of sources out there to satisfy the thirst for comparing the real and once-imagined year 2015. Therefore, let’s make this an easy one, ignoring the crowd of hardcore fans or the geeks among us (last point debatable). Our focus, instead, is to offer the first-ever investment comparison covering the years of Marty’s time travels between 1955 and 2015 (excluding 1885 and 2030; as you can imagine that data was just not readily available to us).

After a nerve-racking arrival into 1955, the first trip of having defeated the space-time continuum, Marty McFly took “cover” in Lou’s Cafe, where, by coincidence, he encountered his father, George, eating a bowl of cereal (what Marty observed was not a picture of grace, but still better than facing the prospect of going on a date with his own mother). In 1955, a box of cereal cost 19 cents, as compared to about $5 today; not a big deal, you may think. But, purely based on inflation data over the 60-year period, the same item should not cost more than $1.50 today. Food-price inflation continues to be a challenging topic compared to general inflation readings the public is being “fed”; in fact, CPI for food in the U.S. runs 700 percent above “all items,” in a year-over-year comparison. As we suggested in Price Check, inflation is not what it used to be, with official data understating the true cost of living—not only limited to food, but particularly considering the price for education and healthcare.

What Marty McFly did not learn, as he skipped effortlessly through the years, is that the world would be gripped by several severe financial crises; the infamous 1987 stock market crash, not too far from his original departure in 1985, is only one example. As investors keep finding themselves engaged in discussions over defining the right time horizon, the topic of long-term investing, as typically suggested, is clearly of benefit. Today, a dollar originally invested in U.S. stocks in either 1955 or 1985 would be worth $4,350 or $858, respectively (based on S&P 500 price return only; excludes dividends). More importantly, both investments would have outperformed inflation by wide margins (at least based on official data). Not being too naïve, most of us do not have a multi-decadal time horizon as an option—at least for all of our assets. As no one knows future outcomes (not even McFly could follow all clues), it is important to follow a rigorous and very personalized goals-based approach when making investments. See our post, A Contract with Myself, for detailed guidance.

On the topic of time, timing is another important aspect to cover. Investors often allow emotions or, better, “felt risk” to guide their decision making. There is a better way to approach this rather subjective issue. Over the past 30 years, the VIX Index, a standard indicator for risk in equity markets, has shown an average volatility of 20.8, with peaks commonly reaching between 80 and 150 during times of market turbulence. Just as McFly defeated the rules of time, the Federal Reserve has changed the rules of risk. As the result of aggressive monetary accommodation, average volatility readings continue to be suppressed. Since 2012—a fictitious hoax year misidentified by some “Back to the Future” (BTF) fans as Marty’s return date—volatility has been kept 25 percent below its long-term average. Not only have feelings about perceived risk been “off,” as markets have in fact been less risky, but equilibrium is suggesting that an adjustment is overdue. Sadly, the Fed still banks on BTF's “ripple effect”: a gradual but permanent change of future outcomes.

In managing the relationship between risk and reward, diversification remains a key consideration. Not only should investors venture into other countries and currencies, and consequently plan for a global asset allocation, but they should also consider illiquid and non-financial assets. In Hangin’ with the Rich Kids, we argued that collectibles can be attractive stores of value. If, in 1985, 17-year-old Marty McFly would have not given a hoot about time travel and just stored the time-machine-converted DeLorean (DMC 12) in a safe place, his retirement “nest egg” would be on a good track: with an original 1985 price tag of $12,000, the estimated 2015 value of BTF’s super racer is close to $1 million, an annual return in excess of 15 percent. Another illiquid investment we must mention: Calvin Klein, the company or, for our purpose, new name McFly took on after arriving in 1955, was started with $10,000 in 1968 and sold for an estimated $730 million in 2002—the best deal yet, and clear proof that select venture capital and private equity investments may pay off handsomely when carefully chosen and allocated properly.

Even considering that Dr. Emmet Brown, aka “Doc,” insisted that he did not design the time machine for financial gain (when Marty eyed the 1950-2000 Sports Almanac to bet on future results), we still could not resist publishing our very own “over time” findings. In very broad summary: have a plan, diversify, do not “balk” at volatility, and do not forget to consider nontraditional assets. In Doc’s words: “Don't worry. As long as you hit that wire with the connecting hook at precisely eighty-eight miles per hour the instant the lightning strikes the tower...everything will be fine.”

Matthias Paul Kuhlmey is a Partner and Head of Global Investment Solutions (GIS) at HighTower Advisors. He serves as wealth manager to High Net Worth and Ultra-High Net Worth Individuals, Family Offices, and Institutions