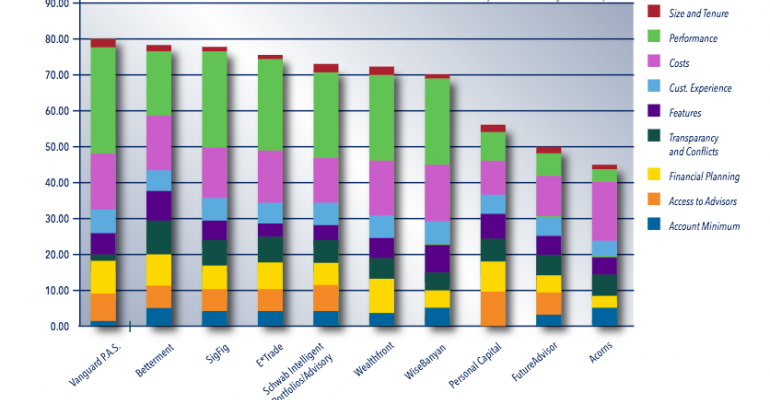 Lack of access to live advisors counted against some prominent robos in Backend Benchmarking's first approach to ranking the services.

The new ranking system incorporates both performance and other features, like users' access to live advisors, transparency of its portfolio construction, its size and tenure, account minimums and financial planning tools. Attempting to remove some of the difficulty of charting the performance of automated investing platforms, the research arm is using what it calls “Normalized Benchmarking” to review the platforms, only ranking products and services with at least two years’ performance data. Normalized Benchmarking attempts to isolate and compare the effects of different equity and fixed income allocations across robo portfolios, allowing for a better comparison of structure, risk and performance, according to Backend.

As the top robo, Vanguard scored high marks in performance and financial planning services, while getting docked for its hefty $50,000 account minimum and a lack of transparency around its portfolio construction. While the firm packed a punch in its returns, it lost some ground when it came to its online experience, which is notably basic compared to its robo peers. 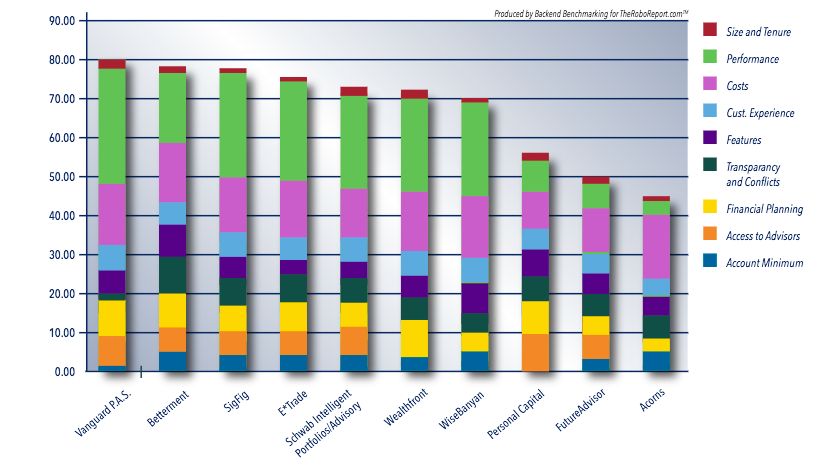 Betterment was a close second, with its focus on user experience and transparency weighing heavily in its favor. Although it was hurt by its relatively middling investment performance, its educational materials, well-designed financial planning tools and low cost made it a favorite for first-time investors, according to the report. The firm’s digital-only and premium tiers make it easier for new investors to grow assets economically, while customers can eventually get access to in-person financial advice without leaving the platform.

SigFig came in third overall, helped by its low fee of 25 basis points per year and minimum investment of $2,000. It scored highly in its performance over the past two years, second only to Vanguard. While the report noted the thinness of its retirement planner, it praised the service’s user interface and customer’s ability to access live advisors.

In fact, access to live advisors weighed down three robos in particular. WiseBanyan, Wealthfront and Acorns were all docked for not providing clients with access to advisors. The report did acknowledge Wealthfront’s strong digital financial planning tools, built around its Path service, and its multi-goal planning capabilities. Acorns was also singled out for its ability to successfully attract assets from young investors, as well as provide behavioral reinforcements for saving and investing, “lowering the mental barriers to investing for those that have never invested before,” according to the report. The app’s fees, however, were cited as something investors should be cautious of.

Because the report was limited to robos for which Backend has sufficient data, there were no acknowledgements given for the “Best Robo from an Incumbent Financial Institution,” which would include automated investment offerings from Charles Schwab, E*Trade, TD Ameritrade, and Fidelity. A minimum amount of performance data will be available for the next ranking, expected in early 2019.