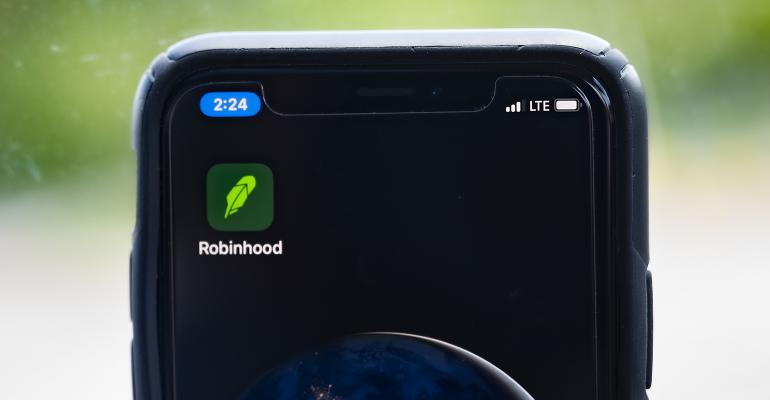 The company is struggling to retain people’s attention. Democratizing finance ain’t what it used to be.

(Bloomberg Opinion) -- “Engagement” is a strange metric to see in a broker-dealer’s results. But Robinhood Markets Inc. is more than an investment firm. It stands at the intersection of finance and social media — a symbol of the “memestock” boom that galvanized a generation of bored locked-down day traders. But judging by the company’s latest figures, the mania is over.

In the first quarter, Robinhood’s monthly active users fell 10% year-on-year to 15.9 million, the lowest since the end of 2020. It’s a loose metric, to be sure, covering debit-card swipes and webpage log-ins. Net funded accounts have held steady, but activity is flatlining: Transaction revenues fell by almost half, and average quarterly revenue per user slumped 61% to $53. In a post-lockdown era of rising inflation, consumers have less money and fewer hours to spare. Eyeballs and finger-swipes are not guaranteed.

This will put Robinhood’s premium “tech” valuation — around seven times annual revenue, a higher multiple than Meta Platforms Inc.’s — under extra pressure. Shares of the financial-services company have already fallen 71% in six months, a drop that began well before Ukraine.

With fewer reasons to get excited about risky, hyped-up trades such as Bitcoin (down 40% since October), the feedback loop of fear is spreading. Trading platform Coinbase Global Inc., which like Robinhood went public last year amid a retail-driven frenzy, is down 62%. The average Robinhood user is 31 years old with an account balance of $240. It’s a band of merry men (women are a minority on the platform) who dabble.

While the company’s business model differs from that of social-media and streaming apps, the reversal of fortunes looks a lot like the post-Covid “attention recession” that’s also battering the likes of Netflix Inc. and Spotify Technology SA. Frictionless and low-cost (even free) mobile trading is increasingly bumping up against entertainment — in some risky ways, as increased regulatory scrutiny of “finfluencers” shows. So it’s perhaps not so surprising to see a trading app also struggle to retain attention. Especially if opening it means seeing how badly tech-sector darlings have performed this year.

What happens next will depend a lot on how the company navigates the current environment. Robinhood seems to be pitching a less entertaining and more profitable future, focused less on the whims of the market. It’s talking up its appeal to paid “Gold” customers and is launching a more diversified, bank-like suite of products. With its recent announcement of a new debit card, Robinhood no doubt aspires to become a super-app like unlisted fintech Revolut, valued at around $33 billion, according to CBInsights.

Yet this strategy sits uneasily beside the company’s apparent need to keep one foot in the crypto world. It keeps adding speculative tokens to its app to entice customers looking for the next coin that could jump from $0.00002 to 0.00003 in a day (and back down again). It’s also bought Ziglu, a cryptocurrency firm based in the U.K., whose ad campaign in Scotland was accused by a watchdog of being misleading. Quarterly crypto trading revenues have been volatile at Robinhood — peaking at $233 million in mid-2021 and most recently running at around $50 million.

Crypto and frictionless trading more generally are part of what Robinhood describes as “democratizing” finance. But the risk is still one of burnt customer fingers and an inability to deliver dependable growth. Regulators are also ramping up scrutiny of everything from crypto markets to payments for order flow, which is how Robinhood subsidizes trades offered to customers. The lost merry memestock men already appear disillusioned. What happens next, if speculative bets keep deflating, may swear them off trading for good.

To contact the author of this story:
Lionel Laurent at [email protected]