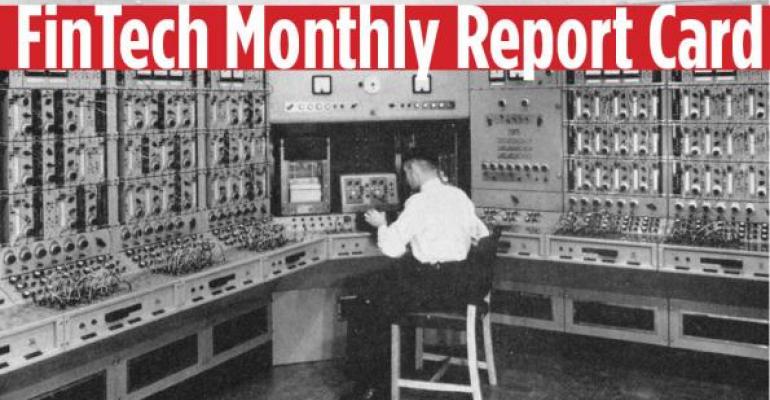 Why it matters: Venture capital accounts for more than half of the 1061 fintech deals closed last year, but data shows M&A is driving most of the year-over-year growth, $7 billion to $11.4 billion in one year is no joke! Now let’s try not to flush it all down the toilet by masquerading as an advisor, rather let’s build real services with real business models that can provide value to under-served consumers who can’t access a [human] advisor.

What happened: Charles Schwab is selling their portfolio management and reporting product to Envestnet’s Tamarac. Envestnet announced the deal on their fourth quarter earnings call, but exact terms were not disclosed. The deal is expected to close in the first half of 2019.

Why it matters: It’s a smart move by Schwab to focus on building a great custodial platform instead of trying to compete with their technology partners. It’s also a smart move by Envestnet to lock down a critical underpinning of their Tamarac business. Competitors Orion, Black Diamond, Advyzon and others are offering discounts to those using PortfolioCenter who want to switch. It’s clear that this industry is full of smart players.

What happened: Fiduciary education leader Fi360 has completed an agreement to acquire Blue Prairie Group’s stable value fund quantitative research and database. All data archives have been transferred to Fi360, and will be available from now on in Fi360’s independent platform.

Why it matters: Fi360 continues to build an impressive array of research tools and data to help advisors become more effective fiduciaries. Congratulations on the upgrades to the Stable Value Navigator product, Blaine, Matt and team!

What happened: Personal Capital’s deep-pocketed primary investor has given them yet another round of funding to fuel growth for their self-directed planning and investing platform. They are reported to have raised $50 million in Series F funding from IGM Financial, a prominent Canadian firm.

Why it matters: Personal Capital has raised over $255 million in nine rounds. Jay Shah, their CEO, says the funding was not out of need, rather “it’s a signal of the powerful business we’re building.” This non-robo that always gets called a robo has a really interesting business model but a really big overhang of venture capital. If their technology investments and digital marketing can really help them grow a massively larger business, this is all going to work out nicely. If not...

What happened: The first digital token from a major United States bank has been unveiled by JP Morgan Chase. In an attempt to undermine other cryptocurrencies like Bitcoin and Ether, the JPM Coin ledger will be controlled by the bank itself and backed by a dollar in JPMorgan accounts. For the foreseeable future, the token is likely to serve only business-to-business use cases.

What happened: LifeYield announced a new feature to help advisors explain the tax benefits of asset relocation to clients. Their flagship “Taxficient Score” is being updated with Taxficient Asset Location Swaps. Now, when LifeYield’s calculation determines the portfolio is losing out on tax advantages, it will create a step-by-step outline of trades an advisor can recommend to improve tax implications.

Why it matters: LifeYield has been making some interesting moves, doing an integration with Riskalyze and helping advisors illustrate the benefits of tax efficiency. Adding in a quick way for advisors to implement asset location changes is a logical next step.

What happened: Wealthfront is reaching beyond automating investment accounts and have announced a savings account of sorts for their consumers. The “Wealthfront Cash Account” will offer customers a 2.24% interest rate, and their customers can open an account with as little as $1.

Why it matters: Why are all the robos rolling out this strategy? They may have finally read Schwab’s annual report and realized that they were a “large cash management business with some trading services attached,” as one industry veteran termed it to me. In other words, it’s all about the revenue. Hey, at least they didn’t call it a savings account and imply that it had the equivalent of FDIC insurance.

What happened: BB&T and SunTrust are becoming the sixth-largest U.S. bank by combing forces in a $66 billion dollar deal. Soon after SunTrust announced that it was moving its bank's headquarters to Charlotte, some began expressing concern over what this may mean for future Atlanta development, business and economic prospects.

Why it matters: Riskalyze’s East Coast Headquarters is in the heart of Atlanta, GA, so we’re quite familiar with SunTrust’s influence on the city and we hope this doesn’t impact Atlantans poorly. Nonetheless, this is a natural consequence of Dodd-Frank and the regulations that have protected the big banks and put community banks on the brink all across the country. Hopefully this turns out well for consumers.