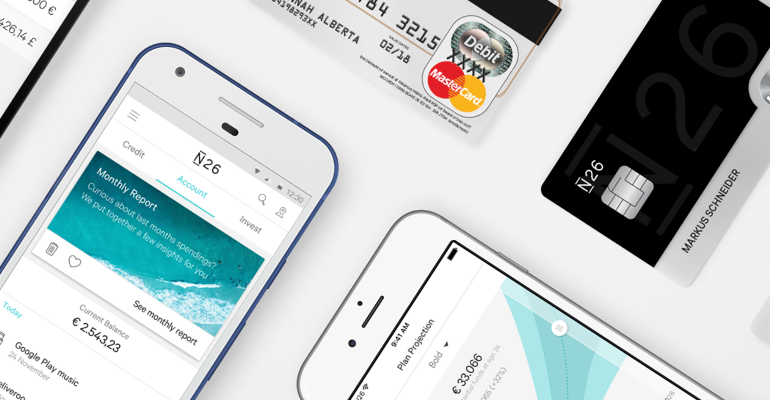 Based in Europe, N26 is setting its sights for a U.S. launch before July.

Mobile banking startup N26 announced it surpassed 2.3 million customers and raised $300 million in a Series D funding round. Although it may not be a household name in the U.S., that could soon change as the bank announced plans to launch its mobile banking product here in the first half of 2019. It already has a New York-based subsidiary in place, in preparation for its launch.

The company is on a tear. The Series D round caps more than $500 million in investments for the firm since its founding in 2013. It's seen cash from companies like Allianz X, Greyhound Capital and Valar Ventures. N26 said its customer base has more than tripled in the past year.

The latest funding round valued the company at $2.7 billion and saw New York-based Insight Venture Partners and the Singapore government's GIC fund make first-time investments. “It’s increasingly rare these days to come across such a massive industry which hasn’t experienced disruption by technology," said Harley Miller, principal at Insight Venture Partners, describing the banking industry, in a statement. "N26 is the clear market leader in the European mobile banking industry. The company is ideally positioned to expand to the U.S. market this year.”

To get a sense of what U.S. customers might expect, here's a look at what British customers get. The basic UK product includes a debit card and mobile app, linked to a no-fee checking account, along with in-app customer chat support, free ATM withdrawals in pounds and free payments in any currency. ATM withdrawals in other currencies incur a percentage-of-transaction fee. For a monthly service fee, customers can get the "N26 Metal" package, which includes free ATM withdrawals worldwide and no currency conversion fees, along with perks like airport lounge access and travel and purchase protection insurance.

N26 operates in 24 European markets and has processed more than €20 billion ($23 billion) in transaction volume to date, according to the company. The company's customer accounts hold over €1 billion ($1.15 billion) in assets.