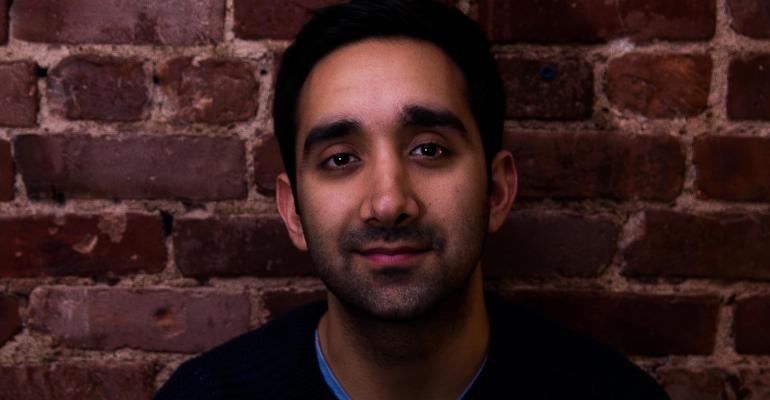 Deepak Chhugani, CEO and founder of The Lobby
Technology

Could This Startup Provide a New Entry Point to Wall Street?

Despite the attrition of wealth teams that regularly break away from Wall Street, there is no shortage of individuals, many of them young college graduates looking for the opportunity to break in.

That is where The Lobby comes in, a startup founded by Deepak Chhugani earlier this year. The company announced Thursday it raised $1.2 million in seed funding from venture capital firms, including Y Combinator, Ataria Ventures, and 37 angel investors, such as Carl Sparks, former CEO of Travelocity and Angela Lee, chief innovation officer at Columbia Business School.

Regardless of the role, the company’s stated intent is to level the playing field for talented candidates interested in joining these top finance firms who might lack an Ivy League degree or personal connections at such firms.

“It is a much-needed concept in the industry,” said Louis Diamond, an executive vice president at Diamond Consultants, a recruiting and consulting firm. “Just the goal that it will allow for people who haven’t had the same opportunities or a specialized pedigree will help break down the walls.”

When it comes to recruiting, wirehouse firms, in particular, have had an emphasis on recruiting seasoned advisor teams for several years. Recently, there has been renewed interest and reinvestment in multiyear training programs of young college graduates and career changers.

“If you go to a top school you have well-established internal recruiting programs that give you a leg up on getting into the top firms,” Diamond said.

Filter choices and a typical listing on The Lobby.

The Lobby provides coaching and insider knowledge meant to improve the odds of being admitted to training programs at top finance firms or other entry-level jobs at those firms. As Diamond points out, the startup could end up positively affecting other areas of the wealth industry without intending to.

“Attrition rates in many of these training programs at the wirehouses are pretty high and this could be a good feeder system for the RIA industry,” he said. “If this coaching makes some of these applicants more aware of the [RIA] segment, which tends to be more entrepreneurial and with less stress—given the asset targets in some of these wirehouse programs—that could be a good thing for everyone.”

Candidates who sign on with The Lobby are allowed to have anonymous 30-minute phone calls with insiders, during which they can ask questions, ranging from what it’s really like to work at a firm to how best to polish their resume to make it attractive to recruiting managers. The Lobby’s insiders also provide mock interviews, resume development, and offer one-on-one career advice on how the candidate can improve their chances of landing the job.

According to the company’s website, a 30 minute call with an insider costs a minimum of $40. Looking through many of the profiles we saw that for most insiders, a call ranges in price from $50 to $120 depending on their level of experience and position. A resume review is an additional $10, a mock behavioral interview an additional $20, and a mock technical interview is also an additional $20.

Once a user has registered they begin by either scrolling through the pages of insider listings (see screenshot above) or using the several filters available based on specific firm types, specific companies, roles, etc. After finding a particular insider the user clicks on the profile, where they can select from a series of checkboxes that include the type of information they want to cover with the insider. (“Learn about your daily routine” and “Company and group culture” are two examples.) This is also where a user would select the other additional services noted above (see screenshot below).

It’s a trust-based relationship though; candidates don’t get the contact information or names of the insiders they’re speaking to; insiders identities are kept anonymous. At the end of the call both parties fill out a questionnaire about the call, including a rating of each other. This is key to the trust aspect, and an insider’s overall rating and number of reviews appear along with their firm name and title.

In an email, Chhugani said this was a way of humanizing the job hunt for those who don’t make it to the interview stage as companies become more reliant on technology to screen candidates. 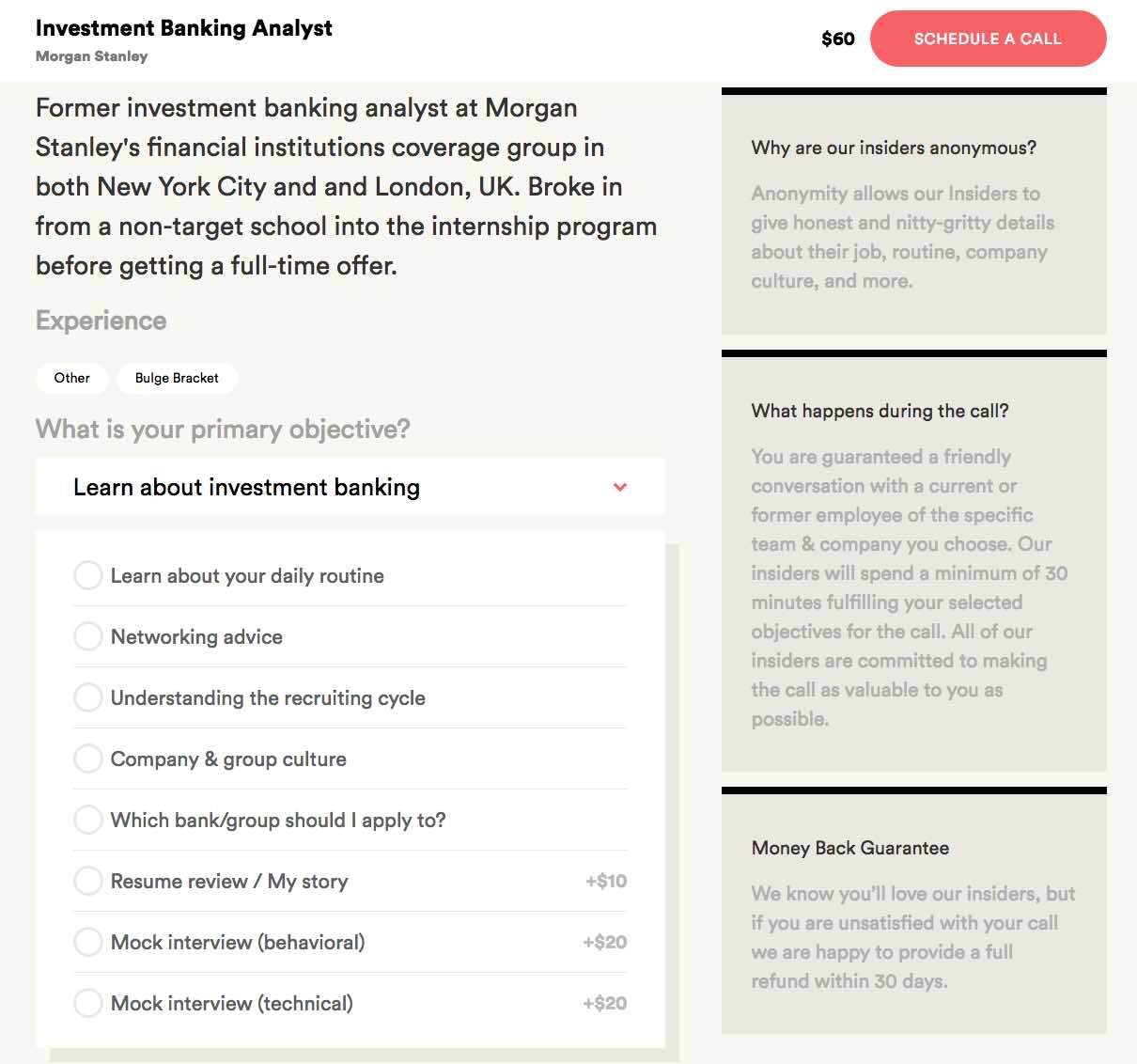 Brief bio and conversation choices when setting up a call with an insider on The Lobby.

“The real value comes from getting insights from people who are on the inside about what it takes to land the job in a friendly dynamic [firm],” he wrote. “This is actually the way most people end up getting great jobs; they have friends, relatives, alumni, etc. who have been inside and give them coaching so they know how to truly prep and stand out. … Our core belief is people who don’t have access to those insights never stood a chance, which is why most of them never even make it to the interview phase.”

When asked how insiders are added to the service, Chhugani said they came mainly through word-of-mouth.

“You won’t find a way to sign up as an insider on our site because it’s a highly curated group that grows through referrals,” he said. “Most people find us because they had a hard time getting their own job and the concept resonates strongly with them.”

There are an abundance of job search sites, networking sites and recruiting services, some of them meant for executives or niche verticals. The Lobby is less focused on specific jobs than on adequately coaching candidates for specific roles and industries, Chhugani said.

“We help people learn if they are or aren’t a good fit for a certain industry, because we give them a risk-free environment to ask questions without the fear of being judged,” he said.

The Lobby is headquartered in New York to expand the company into other industries in the future.

“There are multiple verticals that have seen no innovation or disruption in their recruiting models in decades—law, fashion and journalism, among others,” Chhugani said.