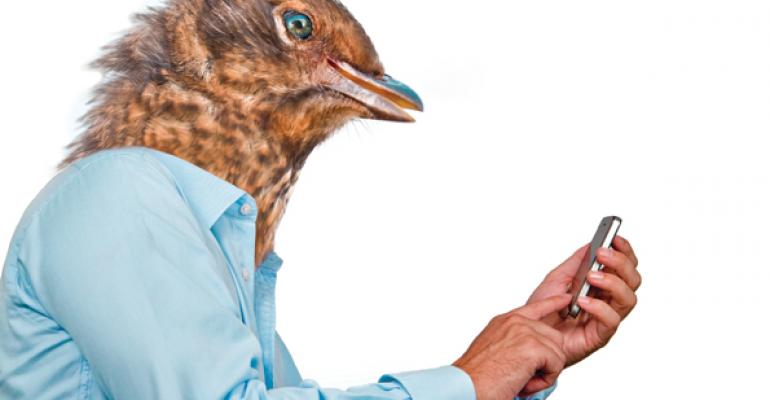 Social media was hyped as the next gen answer to older advisors’ challenges. Not quite. Yet more and more, advisors of all ages are discovering the tangible benefits of the tools.

Winnie Sun had a gold rush of clients fly through her doors in 2013, all brought in, she says, thanks to her social media presence. At least 40 new clients came in last year alone. All told she attributes her social media efforts to landing more than 100 clients for her firm, Sun Group Wealth Partners. A $31 million client found her through LinkedIn.

Statistics lean to 2014 as the year reps acquire a new lead over social media. Forty-nine percent of financial services professionals say they’ve signed a new client over social networks, according to an October Putnam Investments Survey of 400 professionals. And they aren’t just small fry; some 29 percent had acquired a client via social media with more than $1 million in assets.

For advisors, the tide has turned. Social media went from being overhyped as the gen Y answers to the challenges of baby boomer advisors, to what it really is; another tool in the marketing kit, and one that actually moves the needle on client acquisition.

So far, LinkedIn appears to be the primary hook that reps use to gain the attention of new clients, with 66 percent of Putnam’s respondents saying they’re using the site to find prospects. Once they have a relationship, 69 percent of reps then move that connection to Facebook to sustain them.

“You can see how this will become central to how people conduct business,” says Mark McKenna, head of global marketing for Putnam Investments, based out of Boston, MA. “Social will be a really critical channel where it will just be assumed to be part of the relationship.”

Hu sees social media as a place to start her connections, to plant the seed — and then branches out to more personal, real-life touch points. That’s where the difference lies, she believes, between those who know how to work the tools, to those who simply spam out messages on Twitter and then get frustrated when no one walks through the rep’s door.

“It’s the difference between getting a postcard in the mail and a handwritten note,” she says. “Social media is only efficient or useful as your follow-ups.”

Amanda Piper agrees. A financial advisor with Wagener-Lee Wealth Advisors, Piper uses both LinkedIn and Facebook for the firm, like posting about employee birthdays or someone passing a licensing exam. These are nice morale boosters, but it also helps clients and potential prospects get to know the firm as a group of human beings, and not just an office.

She believes the use of social media will definitely grow in 2014, although she doesn’t see a direct line from a search on Google to a signed agreement in her hand. Instead the Columbia, MD.-based Piper says she expects clients will be using social sites to learn a bit more about her after hearing her name from a referral.

“It’s another form of communication,” she says. “Being found, and then having meaningful content on the site. I think that will grow next year.”

But, as Piper, notes, content will be key. Like any marketing medium, it’s the message that’s the hook. A bad tag line for any brand is never recommended. Just so on social media, where tag lines are created almost hourly — and renewed with every new post, tweet or update. Strong, original content is so well received precisely because of its rarity.

“Creating organic content three to four times a day is tough,” says Chris Beard, an advisor with Raymond James Financial Institutions Division in Greenville, SC. “I can only think of a few people who can do that and do it well. But because they do it well they get thousands of followers and readers.”

However does that following translate into an account? Followers are notches on the belt that social media mavens crave. But advisors want clients. While Beard’s only had one client he can directly track back through a social media connection, he thinks investors are going to want to use social media to get to know advisors. And those who have active social media sites are more likely to create an engagement that make investors more comfortable signing with that particular advisor down the road.

“I absolutely believe it has an effect,” he says. “People want to know you have a heartbeat and a soul, and that you’re engaged and weighing in on issues that affect them.”

Daniel Feldstein is not so sure. A CFP, senior financial advisor and vice president of BMO Harris Financial Advisors, Feldstein does not use social media for his business — and has no plans to in the new year. His method for referrals? Current clients. Social media is just not that useful, he says.

“My clients are using social media to touch base with friends once and while,” says the Barrington, IL-based Feldstein. “I think it will grow for some, but I don’t see myself ever utilizing it.”

The big story around Facebook in 2013, however, was the growth of older users — particularly those 65 years and older, according to the Pew Internet & American Life Project. Of seniors using the Internet, 45 percent are now on Facebook, compared to just 35 percent last year.

Putnam too found that the average age of advisors on Facebook were 44-years-old and had ten years in the business, says McKenna  — not those who had just migrated to the business out of college. You can’t rule out social media for older clients — even retirees.

But John Napolitano, chairman and CEO of U.S. Wealth Management in Briantree, MA. wonders if he’ll ever be able to specifically track whether prospects have come through a social media link, liked LinkedIn, or from an outside referral. To date, Napolitano says he can’t say he’s had any material returns from social media.

Still, he’s investing in content that he thinks may have an affect on the traffic from social media in 2014, including crafting new white papers and producing video content, like the dozen pieces he had finished before the new year rolled over from 2013. “I think 2014 will start to turn a few things for us,” he says.

Shannon Paul is also planning on pushing social media further with advisors at Fifth Third Bank. Paul, hired in June 2012 as Fifth Third’s social media strategist and a self-professed “social-media power user” says a social media presence is critical to clients researching advisors. She even checked on her dog’s pet nanny through online channels before hiring the pet-sitting service to care for her pet Saint Bernard while traveling.

She plans to roll out Google+ at Fifth Third, in addition to the presence on LinkedIn, Facebook, Twitter and YouTube. Advisors are still slow in moving on to these platforms, though, because of regulations around pursuing business on these channels, she says. So whether 2014 will be the lightning rod year? Of that she’s still on the fence.

“I think there’s still a lot of questions [about social media],” says the Cincinnati, Ohio-based Paul. “I think it’s still an evolution rather than a revolution.”

To Sun Group Wealth Partner’s Sun, the slower other advisors adopt to social media, the better for her firm. After all, as more advisors step in, the waters get more crowded — and it’s harder to make a rep’s voice heard. But she’s also concerned that new voices may lean to heavily on pre-written material — flat content that doesn’t engage a prospect. She thinks that kind of communication may create a worse situation, by making prospects feel bombarded by what they see as advertising. Nor does she think very highly of hiring outside people to manage a social media presence.

“It’s an opportunity to position your profile, to know how to reach the right caliber of prospects,” she says. “And you can’t do that if you’re not doing it yourself.”