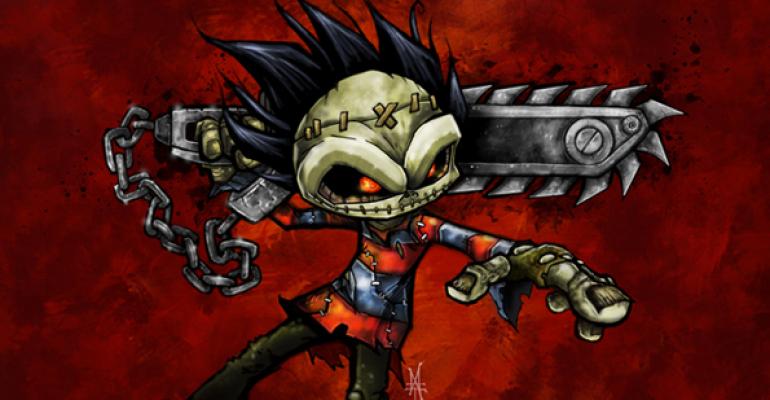 Some financial decisions need to be prudent. And sometimes you just need to grab a chainsaw, head out in to the world and slaughter legions of the walking dead.

The business of killing zombies may not be the most sound investment strategy, but to Jeff Motske and Cary Boring, two financial advisors in Huntington Beach, Ca., it’s at least one from the heart. While the duo invest client funds by day, they run a promising mobile gaming start-up called Mad Menace by night.

And weekends. And pretty much any spare moment they can, actually. It is a start-up, after all. And while they’ll tell you they would never encourage clients to put money into anything as reckless as a gaming company with one tablet app under their belt, their enthusiasm and perspective offer other advisors, and their clients, a way to think about investing in a dream. It starts with keeping perspective.

“It’s a purely speculative investment,” says Boring, senior vice president of investments at Trilogy Financial Services, which Motske co-founded and runs as president and CEO. “It’s either going to be a home run or not make it.”

They’re hoping their invested time and capital (about $200,000 to date) won't be bludgeoned like the foes in their sole game GraveStompers, where a spiky-haired skeletal character named Max wields weapons from chainsaws to pistols to chew through legions of undead to save the town of Slumbering Cove. But like anyone facing an apocalypse, they are prepared for the worst.

Game development could not be further from the duo’s life at Trilogy, with 200 employees and $2 billion in AUM. There’s no start-up feel in Trilogy’s offices on Beach Blvd. Both still dress in collared shirts (Boring prefers a suit and tie.) No tattooed, twenty-something developers are lurking around while clients meet with their advisors in the firm’s slate and tan-colored offices.

Boring has some 85 clients under his practice, yet carves out about 10-20 hours a week for Mad Menace, mostly on weekends and nights. Motske spends even less time on the gaming side — about one to two hours a week, which is usually Tuesday’s at 10:30 a.m. when he and Boring sit down to check-in on the nascent business. He is, after all, the CEO of Trilogy, and that takes focus as well as time.

Furthermore, there’s a Maginot Line between the work Motske and Boring undertake for Trilogy and what they do at Mad Menace. Neither Trilogy’s clients nor staffers beta-tested GraveStompers, nor made any investments in it themselves. To them, Mad Menace is a purely fun endeavor — and one that they want to keep as far away from Trilogy as they can.

"It’s a hobby,” says Motske. “This isn’t something you want investors involved in unless they’re willing to lose anything and everything going in.”

…But Find A Passion

At the same time, they are taking their side investment seriously. As careful as they are with their clients‘ money — they’re following similar rules for themselves.

The two met 20 years ago when Motske’s wife dragged him to the wedding of her friend, who happened to be marrying Boring. They hit it off. To be sure, both like video games — but weekends were just as likely spent with their families rather than tucked in front of a console game shooting foes.

Boring, a former engineer, knew a bit about the tablet app market when the opportunity to launch GraveStompers came. Boring’s brother-in-law, artist Matthew Newman, had created a storybook with 70% of the concept already developed. Boring and Motske took the boards to some game publishers Motske knew, and got positive feedback on the concept.

That was enough to at least get them doing some research in earnest. As fluent as they are in estate planning and wealth accumulation, the two can also rattle off a dizzying array of statistics from the mobile gaming market. Research firm IDC expects tablet shipments to surpass desktop PCs by 2013, and portable PCs in 2014, according to a recent report. Growth in 2012 was up 78.4% — to more than 128 million units shipped. Motske and Boring’s theory: As tablets get cheaper and faster, the potential for these screens to become full-fledged gaming consoles is a solid bet. Optimized for tablets, their game uses the touch screen to move, give gamers a 365-degree view of the carnage and of course choose their favorite zombie-slaughtering tools.

They launched the free version of the game in the fall of 2012 to build up awareness, before launching a paid version in May. More than 800,000 users have downloaded the free version as of early June, with close to 10,000 paying for the $1.99 version, according to Boring. The game has been featured in Apple’s App Store and on Google Play; the paid version is currently No. 36 in the Amazon game store.

“Jeff and I are big logic people,” says Boring. “The audience is there. Now it’s just a matter of running the brand and making sure people look at Max just as they would the Angry Birds characters. That’s where the money comes in, on the novelty items, not just the game.”

They also understand that licensing deals can offer huge returns in the gaming and entertainment market. They’ve acquired the rights to use the likeness of Ghostface, from the Scream movie franchise, in the game; dedicated users can play as Ghostface instead of Max.

“I think my ability to analyze numbers and look at margins is important,” says Motske. “You sometimes get people who want to expand the game, make it bigger. And I say, ‘Wait a minute. We need to make sure we get a return on the investment. We have to make sure we have some margin, and something for overhead.’”

In the meantime, Mad Menace is at work on a second game called Mini Minions, with a launch date eyed for 2014. The game, which is 20% completed, will have a fun social feel in a world inhabited by candy-colored miniature creatures that players can design themselves — think FarmVille meets Moshi Monsters.

While both Boring and Motske are excited for the launch of the new game — they also know that in the high-risk investment world of entertainment, the right perspective is to find the fun in the process, and focus less on looking for the big payout. They’d never advise their own clients to invest along these lines, but to Motske the decision was one he felt he just had to make.

“I guess I would have wondered if I should have take that shot,” he says. “I decided if I looked back and hadn’t taken that shot, I would be bummed. So whether it works or not, I needed to take it.”