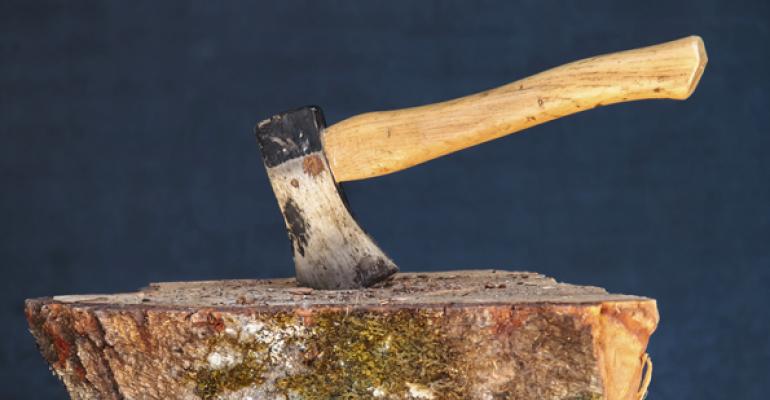 On The Chopping Block

Much has been written about the looming fiscal cliff, a combination of tax increases, expirations and budget cuts set to take place in 2013.  The Bush tax cuts that lowered income and investment tax rates since 2001, which the Tax Act of 2010 extended, are set to expire at the end of 2012.  Many tax incentives that have benefitted the middle class, like the earned income and child credits and subsidies for businesses, education and health care, will revert back to their former incarnations on Jan. 1, 2013.  Also in January, the 3.8 percent Medicare Tax instituted by the Affordable Care Act will be imposed on families who make $250,000 or more and whose investment income exceeds the threshold.

In addition, drastic cuts to defense, Medicare, education and social services are set to take place next year, thanks to the sequester and Congress’ failure to enact legislation to cut the budget and reduce the deficit.  Analysts believe that if Congress fails to enact legislation that would extend or change these laws, the United States will hit a fiscal cliff, which may push the economy into another recession.

The presidential candidates each have their own theories for how to avoid the fiscal cliff and, more specifically, what to do about taxes.  President Obama has promised to extend the Bush tax cuts across the board, but let them expire on the “wealthy,” defined as those who make $250,000 or more per year.  Mitt Romney wants to extend the Bush tax cuts for one year and, thereafter, cut taxes across the board by 20 percent.

Whatever the outcome of the election, however, the future administration and Congress must look long and hard at other tax cuts and strategies that are expiring, to generate the revenue needed to curb the burgeoning deficit.

Here are some tax cuts and incentives on the chopping block:

1. The payroll tax holiday.  Typically, workers pay a payroll tax of 6.1 percent on Social Security, but for the past two years, workers have had a 2 percent reprieve thanks to the Tax Act of 2010.  The purpose of this tax holiday was to provide more cash to the average worker, so that a worker earning about $50,000 per year would have saved about $20 a week.  Although there’s been some discussion in Congress about whether to extend this tax holiday, there hasn’t been any serious action and it’s unlikely to be extended.

2. Limiting versus capping certain deductions.  Over the past few years, many lawmakers have called for a limit on certain deductions for taxpayers who itemize, such as limits on deductions for mortgage interest, charitable gifts and state taxes.  President Obama has proposed limiting to 28 percent the amount of interest a taxpayer may deduct on these items.  Lobby groups representing these interests have been fighting very hard against these possible changes.

In recent weeks, Romney has addressed these deductions and has proposed to enact a dollar cap, somewhere between $17,000 and $50,000, within which the deductions would be allowed.  Anything beyond that cap wouldn’t be deductible.  The Wall Street Journal recently reported a study by the Tax Policy that projects a $25,000 cap would generate $1.3 trillion in additional revenue over the next 10 years.1

3. Adjust tax status on municipal bond interest and life insurance build-up.  Legislation has been introduced in past years, and again in recent months, to limit or change the tax-favored status of certain investments, such as municipal bond interest and life insurance build-up.  President Obama has proposed to limit the tax-exempt status of muni bond interest to 28 percent.  The $3.7 trillion muni bond industry has pushed back, and analysts believe that it’s unlikely that the taxability will change unless a similarly advantageous bond instrument replaces it, like a tax credit bond similar to the Build America Bonds created by the Stimulus Bill.

Romney has mentioned in his tax reduction and deficit reduction plans that the taxation of life insurance build-up may help to also generate revenue to curb the deficit.  The insurance industry is pushing back strenuously, insisting that, historically, the U.S. government has relied on insurance products and the tax benefits they provide to fund Americans’ retirements, and Americans rely on the tax-deferred status of their insurance products.  The total savings between municipal bond interest and life insurance build up, according to the Tax Policy center, would be about $70 billion a year.

4. Estate planning strategies.  The 2010 Tax Act not only addressed income and investment tax, but also estate, gift and generation-skipping transfer (GST) taxes. Under the Act, the estate tax went from 0 percent in 2010 (45 percent in 2009) to a 35 percent estate, gift and GST rate.  The exemptions also increased from $3.5 million to $5 million, adjusted for inflation.  If nothing is done to extend the rates or change them, on Jan. 1, 2013, the tax rates will revert to 2001 levels—55 percent and a $1 million estate, gift and GST tax exemption.

President Obama has stated that he would increase the estate tax rate to 45 percent and reduce the exemption to $3.5 million (or $7 million per married couple).  He has also favored making portability permanent.  Romney has proposed elimination of the estate tax entirely.

An immediate concern is whether either candidate would impose limitations on grantor retained annuity trusts (GRATs).  Since 2010, there have been calls to eliminate “zeroed-out GRATs” and impose a minimum 10-year term, which would greatly diminish the usefulness of GRATs as an estate planning strategy.  These proposals have been on the table for a while, and have been introduced in various forms of legislation, including in the 2010 Jobs Act.  It’s very likely, as we get closer to a definitive answer on taxes in general, that limitations and changes to estate planning strategies will also be instituted.