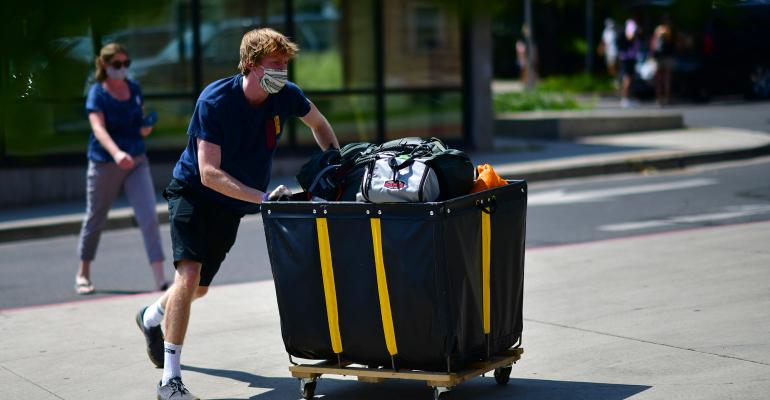 American Campus Communities Inc. is at the center of a debate about whether students may look for ways out of their leases.

(Bloomberg)—Two analysts defended American Campus Communities Inc.’s long-term growth prospects even as Covid-19 outbreaks are leading some U.S. colleges to change plans for in-person classes. Shares of the student-housing owner fell as much as 4.1% intraday, touching their lowest since May, adding to Tuesday’s 4.7% decline.

“We would use any weakness in ACC to add to positions as we believe the fundamental value hasn’t really changed much even if Covid-19 cases are a bit higher than expected this fall,” Evercore ISI analyst Steve Sakwa said in a note out midday Tuesday.

Recent coronavirus outbreaks at University of North Carolina at Chapel Hill and Notre Dame have brought into question whether university decisions to hold in-person or hybrid classes are safe for students. As universities move online or plan to move online in case of an outbreak, students may look for ways out of their leases, bringing American Campus to the center of the debate as it runs properties on and near colleges.

American Campus might benefit as universities look to off-campus housing to “de-densify” and update old-fashioned dormitories, Capital One analyst Neil Malkin said in a phone interview Tuesday. Malkin estimates universities in California, New York and Seattle might switch to online from in-person or hybrid instruction if an outbreak were to happen, but not universities in Florida, Arizona and Texas.

If universities decide to refund housing to on-campus students, Malkin estimates American Campus might be forced to do the same. Another way a fully online school in the fall may negatively impact the company is if incoming students opt to take a gap year, leading to lower enrollment rates, Malkin said. “You could go down an unsavory path with a loss of significant revenue,” Malkin said.

Seven analysts, including those at Capital One and Evercore, rate American Campus Communities at a buy or equivalent, compared with four holds and no sells, data compiled by Bloomberg show. The average price target is $41, about 29% above recent prices.

Year to date, American Campus shares have fallen 33%, while the Bloomberg U.S. REITs Index has dropped 14% and the S&P 500 has rallied 5.1%, recouping its pandemic losses to reach a record. The indicated yield for ACC is nearly 6%.

To contact the reporter on this story: Hardika Singh in Columbus at [email protected].

To contact the editors responsible for this story: Catherine Larkin at [email protected]