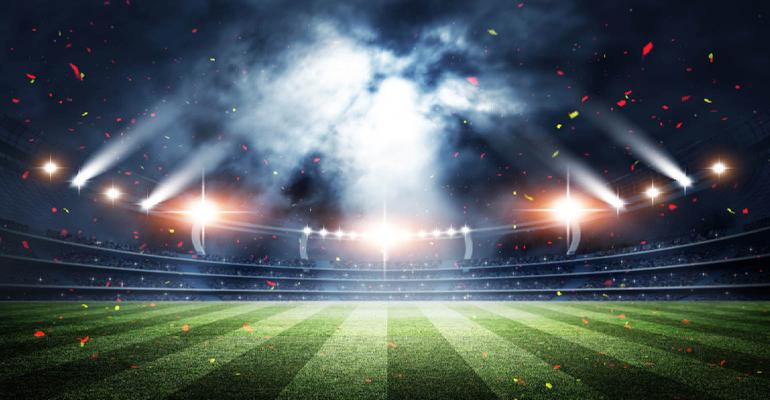 “There definitely is a direct parallel between the two. Enrollment typically continues to grow at universities with winning football programs,” says Sean Baird, director of the national student housing group at real estate services firm Colliers International. “For student housing, the university is the engine powering the investment. As long as your football team is winning, donors will be pouring money into the universities, applications will continue to rise, enrollment will grow, and investors will be attracted to enter the market.”

These schools also capture nearly half of all student housing investment sales in the country, CBRE reports. A total of approximately $11 billion was invested in student housing assets in 2018, with private capital leading the way, according to JLL research.

Of the 10 largest markets for student housing investment, eight are anchored by a single major public university, according to JLL research.

To gauge the future lease-up rates and potential rental growth at student housing assets, the university’s “number of applications is important. The acceptance rate is important. So, the lower the acceptance rate, the better obviously, just because if there is any drop in applications, for instance, enrollment is not going to decline,” says Jaclyn Fitts, director of CBRE's national student housing group. “I would say applications, admission rates, we also look at international population at any given university. Those are different supply factors that investors use to determine the demand they’ll get in their investments.”

A winning football program can assist with all these demand-related metrics, according to John Pawlowski, senior research analyst at Green Street Advisors.

In the first half of 2019, student housing acquisitions at NCAA’s Division I Power Five universities had an average cap rate of 5.4 percent, which is 43 basis points below the cap rate on assets near non-Division I schools.

Cap rates on student housing assets at Division I non-Power Five universities averaged 5.43 percent, also below the 5.83 percent average for non-Division I universities.

Cap rates compressed the most on assets near Division I non-Power Five schools. Fitts uses the University of Houston as an example, citing the recent success of its football program at the same time the cap rates on student housing assets declined.

“With the amount of diverse capital in the space, pricing has been aggressive over the past few years,” says Teddy Leatherman, real estate analyst at commercial real estate services firm JLL. “There are some markets that have experienced a lot of supply that are seeing some softness, but overall cap rates and pricing have remained strong. In some student housing markets, cap rates have dropped below conventional multi-housing cap rates which speaks to the power of the sector.”

But investors need to account for some level of risk to the popularity of the traditional four-year degree. As tuition costs rise and other educational offerings, such as online classes, gain popularity, some analysts forecast a decrease in overall U.S. enrollment. That would be a major disadvantage for the student housing sector.

“Investors have to pick their spots more selectively. They can’t invest in a large basket of schools and expect them all to succeed to the degree they did for the last 10 years, when the sector had a more accommodating demand backdrop,” says Pawlowski. “If the entire nation has a slowing or negative enrollment, it means there are going to be schools that have even worse trends. So, you have risk of inferior returns in a larger number of schools.”

Though Pawlowski says it’s still too early to be sure the four-year degree will lose its value in the future, there is growing pressure on enrollment rates.

“We’re not saying definitively that the four-year degree loses its value. It’s that there is some risk [that] competing educational offerings steal the lunch of four-year college campuses,” he notes. “There’s a greater likelihood that schools have to close their doors because their value proposition to students is just not as compelling.”

Market-wide, cap rates on student housing assets continued their downward trend in the first half of 2019, according to CBRE. The average cap rate of 5.47 percent was 9 basis points below the 5.56 percent average in 2018.

“The asset class continues to attract new capital daily and occupancies remain high in majority of the markets,” says Baird. “For investors chasing strong returns and a recession-proof asset class, student housing stands out as the best option.”