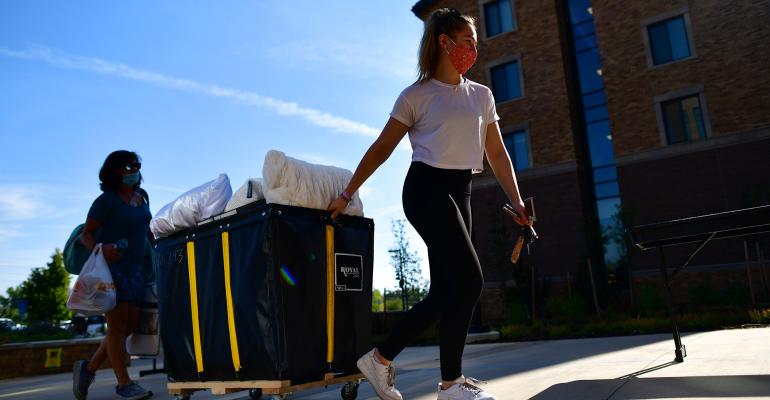 More than $14 billion in municipal bonds were sold to finance student housing projects.

(Bloomberg)—Less than a third of the rooms in a new $90 million dorm set to open this month at the California College of the Arts in San Francisco are taken. An opulent apartment tower financed by $228 million in municipal bonds at Florida International University, with a rooftop pool and gym, hasn’t yet met tenant projections.

It’s a scene playing out on campuses across the U.S. as families skip the usual college move-in frenzy, leaving thousands of dorm rooms empty. That will cascade into the more than $14 billion of municipal bonds sold for student housing, particularly securities sold by private companies relying on rental and leasing revenue to pay bondholders. It’s one of the first places where investors who bet on higher education can expect trouble because of the pandemic.

Colleges for years have been turning to private companies for student housing to shed costs and lure students with state-of-the-art facilities. The companies borrowed the money for construction from municipal bond investors, with a promise to repay with rent and lease revenue. But with schools switching to virtual learning or limiting the number of students who can live on campus, the bonds that are often already risky are facing a major threat.

“This is where we could see more credit stress first, and the reason is because of the bond securitization,” said Jessica Wood, a higher education analyst at S&P Global Ratings. “Student housing projects are structured very lean.”

S&P warned it may have to lower its credit rating on 16 privatized student housing projects. Municipal Market Analytics, an independent research firm, said more student housing projects are likely to default in addition to four already this year. One of the defaults includes a municipal-bond financed luxury dorm at the University of Oklahoma that was struggling before Covid-19.

The National Campus and Community Development Corp., a nonprofit that finances dorms, sold the nearly $90 million in junk-rated bonds for the California College of the Arts dorm in 2019. Rooms with two beds and a mini fridge were slated to cost about $1,400 per month, a price marketed as an affordable option for students in a city with notoriously high real estate prices, according to bond documents. But because of Covid-19, the school has had to limit one student to a room. The dorm was only 29% pre-leased at the end of July, according to a regulatory filing.

Prices on thinly traded bonds sold for the dorm that come due in 2039 had plunged almost 15% in a year by mid-August, according to data compiled by Bloomberg.

A nonprofit that borrowed $132 million for a five-story dorm at the University of Massachusetts Dartmouth -- one of the 16 projects cited by S&P for potential downgrade -- said that capitalized interest will cover debt payments in 2020. At one point in April, Provident Resources Group said in filings for its dorm properties that it received over 300 inquiries from investors.

At the UMass Dartmouth campus, only students who have to travel from far away for required on-campus instruction or need on-campus services are allowed to live in residence halls, according to a university update on Aug. 10.

In some cases, the colleges are helping to support the bond-financed projects. At a Collegiate Housing Foundation property at the University of California at Irvine, the company agreed not to charge students cancellation fees or rent if they terminate their housing in exchange for the university leasing beds there to support the project, according to a securities filing.

“Undoubtedly, many of our projects are facing difficulties as universities adopt policies to proceed with instruction partially or entirely on line and/or to limit occupancy in residence halls for social distancing purposes,” William Givhan, president of the Collegiate Housing Foundation, which owns 35 student housing facilities across the U.S., said in an email.

In a Miami suburb, the developer of the Florida International University dorm had pre-leased about 77% of the apartments earlier this month, while it was expecting more than 90%.

Brian Pearl, principal at Global City Development, said he expects the project to meet its debt service covenants this year, adding that construction was completed on time. He said he expects the pre-leasing figure to reach the mid-80% range at least. The bonds, which rarely trade, have risen in price after falling in June.

The coronavirus recession could make the luxury space a tougher sell to students. Still, Pearl said he expects that students will be drawn to the dorm experience where they can make friends.

“Having the opportunity to do that, I think, is very important,” he said.

--With assistance from Emmy Lucas.

To contact the reporters on this story: Amanda Albright in New York at [email protected];