A former Wedbush Securities advisor took greed to a whole new level when he murdered his friend and client to gain $8.9 million, according to authorities.

According to prosecutors, on June 8, 2010, Keigwin tasered Watson at the front door of his apartment in La Jolla and then strangle him. Watson's body was found two days later.

A day after his death, authorities discovered Keigwin transferred $8.9 million from one of the victim's investment accounts into a new account controlled by the Wedbush advisor.

But Keigwin returned to the apartment, according to prosecutors, as police and lab technicians were processing the scene of the crime. A detective noticed Keigwin’s face had red splotches, scabs and scrapes. When police searched Keigwin, they found keys to Watson’s apartment, three plastic bags, a flashlight, and a dust mask. In addition, prosecutors say police found Keigwin’s DNA under Watson's fingernails, suggesting the two men had struggled.

In addition to the first-degree murder, Keigwin was also charged with five other felonies: two counts of identify theft, attempted grand theft, burglary, and forgery.

Bad Finances Prove Fatal
Securities wholesaler Patrick Allen has been on trial since Sept. 24, charged with the death of his wife in November 2011. Prosecutors claim the 47-year-old smashed his wife over the head with a frying pan and strangled her in their Middletown, N.J. home.

Allen, who also serves as a partner in Amark Ventures, allegedly killed his wife, Kimberly Allen during an argument over finances when she learned they were $600,000 in debt and the mortgage companies were foreclosing on their home.

For his part, Allen maintains his innocent, insisting he did nothing to hurt his wife and said he left the house that day to cool off after an argument and then returned after his wife was attacked. Allen remains detained at the Monmouth County Correctional Institute in lieu of the $1 million set for bail.
Death By Clubbing

A former UBS advisor was convicted to life in prison in January for bludgeoning his ex-wife to death with a golf club. Yavapai County prosecutors claimed Steven DeMocker, 60, killed Carol Kennedy in 2008 to collect on an insurance policy and to avoid paying alimony.

No one saw Kennedy killed, but her mother claimed that she was on the phone with her daughter the night of the murder and heard her say “oh no” before the line disconnected. Ruth Kennedy called the police, who found Kennedy already dead from multiple blows to the head.

Authorities claimed DeMocker’s motivation was a $750,000 life insurance policy he would gain, along with the fact he was required to pay his ex-wife $6000 a month in alimony support.

The January sentence, under which DeMocker must serve 25 years in prison, wrapped up a courtroom drama spanning years of twists and turns—including a key witness’s suicide and a defense team’s abrupt decision to quit the case in 2010.

A small-time broker from Columbus, Ohio went from white-collar financial fraud to full-blown murder. Robert Bales made national headlines in March 2012 when he brutally massacred 16 Afghan civilians while on duty with the U.S. Army.

Early in his career, Bales worked as a stockbroker with Ohio-based Michael Patterson Inc., where he allegedly committed securities fraud. But before an arbitration panel could issue a decision, Bales joined the Army. While the panel ruled Bales and his firm were liable for $1.4 million in damages, the victim could not collect because authorities were then unable to locate him.

After three tours of duty and 11 years with the military Bales was assigned to base security at Camp Belambai in Kandahar Province in Afghanistan. Military officials claim the night of March 11, 2012, Bales had been drinking before he ventured into two villages near the base and shot 16 Afghan civilians, nine of whom were children. More horrifying, officials allege Bales returned to the base after his first attack and left the camp an hour later to commit the second attack.

During the trial, prosecutors sought the death penalty, despite a lack of an official confession or forensic evidence. To avoid the death penalty, Bales agreed to a plea deal in June that guaranteed life in prison. When asked why he committed the murders, Bales blamed steroids for increasing his irritability and anger. He is currently incarcerated at Fort Leavenworth in Kansas.

A former Illinois broker is serving over seven years in prison for what prosecutors claim was a deadly plan to poison his wife with puffer fish venom.

In September 2012, a judge sentenced Edward F. Bachner IV to 7 years and 8 months in federal prison after the former New England Securities broker amassed a stockpile of the highly lethal neurotoxin tetrodotoxin, commonly known as TTX.

Starting in 2006, Bachner posed as ‘Dr. Edmund Backer’ and made several attempts to purchase large amounts of TTX through a chemical company. Despite his claim he was a doctor doing research, at least one order raised red flags and an employee with the chemical supplier reached out to the FBI. When authorities began investigating Bachner, they discovered he recently purchased a $20 million in life insurance policy on his wife, leading investigators to believe he had motive to kill.

When authorities searched Bachner’s home, they found 45 vials of the poison, 50 knives, various other weapons, as well as a fake CIA badge. He was subsequently arrested in June 2008 and finally reached a plea deal in August 2011. Bachner pled guilty to federal charges of possession of a neurotoxin with intent to use it as a weapon, wire fraud and filing a false tax claim.

You Won't Snitch On Me

A California-based broker allegedly went to great lengths to keep his financial crimes concealed. In October 2012, police arrested Daniel Edward Becerril II for the murder of his client, a Santa Monica school teacher.

According to police, AP Financial Group founder Becerril stabbed Alexander Merman in March 2008 to keep the client from going to the authorities, presumably to tell them of Becerril's alleged financial crime. Merman’s apartment manager found the body a few days later after receiving calls from the teacher’s concerned mother.

During the four-year investigation, detectives found Becerril owed Merman $250,000. Even more incriminating, they discovered $300,000 had been stolen from Merman’s accounts and deposited in accounts owned by the former broker and his firm.

Sleeps With the Fishes

It’s the stuff of true crime TV: An investment advisor kills his client, runs off with stolen millions and is discovered years later after his co-workers at a used car dealership grow suspicious of him.

Harvey Morrow was accused of murdering a well-known Denver DJ, Steven Bailey Williams. According to police, Morrow approached Williams as his late father’s friend, offering to invest and manage his almost $2 million inheritance. Three years later Williams’ body was discovered floating in the ocean along the California coast; he'd apparently been shot once in the head.

Before he went missing in early May 2006, Williams told friends he was suspicious of his self-identified financial advisor and the investments that had been made.

But by the time the body was discovered, Morrow was long gone. He traveled to Montana and took a job at a used car dealership. He told co-workers a boating accident killed his wife, and he could no longer stand the sight of the water, so he moved away from California. A curious co-worker looked up the story online and stumbled upon the truth. Morrow was arrested and brought back to California, where he was found guilty and sentenced to life in prison.

Not That Lucky After All

Winning the lottery isn’t always a lucky break, a lesson learned after a Florida lottery winner wound up dead under a concrete slab in 2010. Abraham Shakespeare’s troubles began when he had a friend purchase a lottery ticket in November 2006 which turned out to be worth $30 million. Shakespeare took a $17 million lump sum payout and set out to enjoy life.

Yet Shakespeare complained he was constantly warding off appeals for money. In October 2008, Dorice "Dee-Dee" Moore arranged to meet with Shakespeare on the pretext of writing a book. But eventually Moore—an advisor with American Family Securities—took control of Shakespeare’s money and started a business with him.

During the early months of 2009, Moore withdrew $1 million from Shakespeare’s accounts and bought herself luxury cars and a vacation trip. Eventually, Shakespeare disappeared from sight, with friends claiming they had last seen him in April 2009. But for months, Moore convinced people that Shakespeare was hiding, sick of being asked for money and help, authorities claim. She allegedly paid a relative $5,000 to deliver a birthday card to Shakespeare’s mother and pretend it was from the lotto winner.

Moore’s behavior raised suspicions and eventually Shakespeare’s family filed a missing persons report in November 2009. In January, police found Shakespeare’s body buried under a concrete slab in the backyard of Moore’s boyfriend's house. Moore was arrested and charged with first-degree murder in February.

More than two years after his murder, a jury found Moore guilty of Shakespeare’s murder and sentenced her to life-in-prison.

Carrying Secrets to the Grave

A Memphis, Tenn. community was shocked in October 2008 when a member of the local auto club and a vice president at the investment firm Cantor Fitzgerald was found dead in the backseat of her Chevrolet Avalanche.

At first, Tina Caronna’s husband of 15 years, Joe Caronna, claimed it was a carjacking gone wrong. But police didn’t buy that, as Tina’s body was found partially nude, her hands loosely bound together with duct tape. More telling was that the thousands of dollars worth of jewelry had been left behind—something a thief wouldn’t do.

Caronna, who ran the financial firm Caronna Investments, eventually became the main suspect, especially after authorities discovered his massive financial house of cards. Under the guise of investing, Caronna allegedly swindled his clients, including Tina, their closest friends, and even a long-term mistress, out of millions, according to authorities.

Suspecting Caronna killed his wife to keep his fraud a secret, police attempted to arrest him, only to find him missing. After a 17-day manhunt, they arrested him in a Jackson, Tenn. hotel in March 2009.

A jury found Caronna guilty in November 2012 and he was automatically sentenced to life with possibility of parole. At the time of the trial, Caronna also had a civil case pending in Tennessee over his alleged insurance fraud, money laundering and other federal charges.

Annihilation by Strangulation
A former PNC Wealth Management senior wealth advisor is currently in jail awaiting trial after allegedly strangling his girlfriend to death. Michael Jones was arrested in June after the body of his on-again, off-again girlfriend Diana Duve was found in the trunk of a car left in a parking lot.

According to investigators, Jones and Duve were last seen together at a restaurant during the early morning hours of June 18. Duve’s parents became concerned when they didn’t hear from their daughter and a search for both ensued. Four days later, Jones was found in a hotel about 15 miles away in Fort Pierce with $2,500 in cash, claiming he was on vacation. Jones was charged with a probation violation related to a separate case.

Jones, who brought in more than $14 million in new accounts during the 14-months he worked for PNC, previously worked for Wells Fargo. In August, a grand jury indicted Jones on a charge of first-degree murder, and prosecutors are moving ahead with the case. 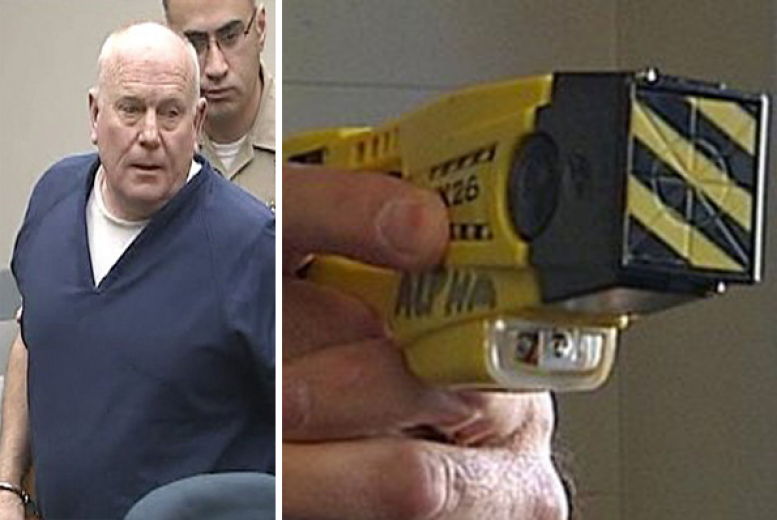