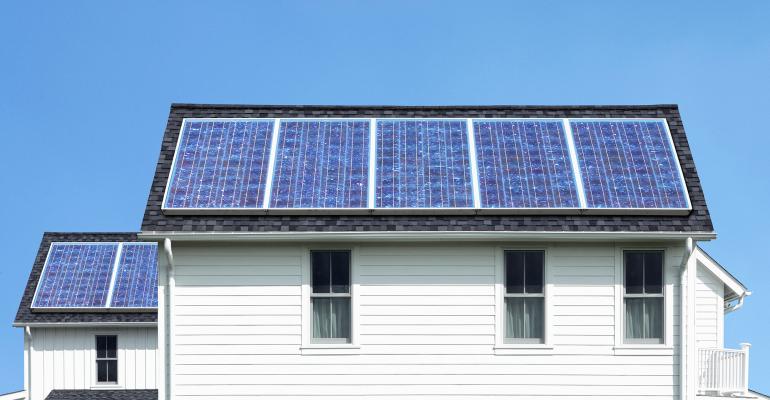 American Homes 4 Rent, which owns about 60,000 single-family rental homes across the country, has been tweaking designs of houses it builds itself to make them more durable and energy-efficient. The company says it could eventually operate its entire portfolio at net-zero.

(Bloomberg)—The Ponds at Walden Woods in Plant City, Fla., looks a lot more like a classic suburban tract than a blueprint for sustainable design. It’s full of new three- and four-bedroom homes—their prominent garages indicating how residents get around here—30 minutes from downtown Tampa. The Thoreauvian branding and solar-powered amenity center seem less like a come-on to eco-minded house hunters and more like a finger in the eye to critics of suburban sprawl.

But American Homes 4 Rent says the community (which got through Hurricane Ian with only minor damage) demands a second look. The landlord was founded a decade ago, when it acquired Sun Belt homes in the aftermath of the US foreclosure crisis, then shifted focus to building communities of rental houses like Walden Woods. It now owns about 60,000 single-family rental homes across the country, and for the past five years it’s been tweaking designs of houses it builds itself to make them more durable and energy-efficient. The company says it could eventually operate its entire portfolio at net-zero.

That would be big news for American suburbs, where spacious detached homes and longer commutes translate into larger carbon footprints and where corporate landlords such as American Homes, Invitation Homes, and Progress Residential are building their portfolios. These companies scooped up houses during the pandemic as prices surged and inventory tightened, drawing criticism for making it harder for families to climb the homeownership ladder. Some of them have been rebuked for sharply raising rents and charged with using aggressive tactics to evict tenants during a federal eviction ban. Local governments have begun to weigh laws that restrict their ability to acquire homes.

While the industry is hardly popular, given its sheer size, it could, in theory, move the needle on home energy efficiency and carbon emissions. About 21% of total US energy consumption last year came from residential energy use.

“What we have done today is take the first baby steps in a process,” says David Singelyn, chief executive officer of American Homes 4 Rent. “The things that we are going to learn in the next five years are going to be significant. It’s going to be so much better five years from now than it is today.”

Singelyn’s company started down its path in 2017, when it began constructing its own properties. In those projects, it’s focused on tightly sealing the walls and roofs to reduce tenants’ need for heating and air conditioning. It also installs smart thermostats to help tenants, who pay for their own energy, better manage consumption.

Last year the company evaluated almost all of the 2,000 homes it built with the Home Energy Rating System, or HERS, which grades houses on a scale from 150 (inefficient) to 0 (net-zero). American Homes notched an average score of 63. That’s pretty close to the average of 58 for all new homes that were tested last year and represents solid performance, especially in warmer climates, according to Ryan Meres, a program director at the Residential Energy Services Network, the organization that administers the standard.

American Homes is focused on the right things, says Meres, but still has room to improve. “We have national builders that build entry-level homes that build down into the 50s,” or the 40s with solar, he says. “It’s a matter of how much effort is put in.”

The company is starting to install solar panels on the roofs of community centers and is putting them on 86 homes in Las Vegas as a test case. The main impediment to doing more is the expense. Even at scale, solar and battery systems can cost more than $70,000 per home, says Marshall Gobuty, president of Pearl Homes, which is building net-zero vacation rentals in Cortez, Fla., about 65 miles from Walden Woods. That would be a substantial amount for American Homes, which says its homes cost about $340,000 to build after factoring in land costs.

Especially since it isn’t clear that prospective tenants are willing to pay higher rent for greener features. When the company has surveyed consumers, environmental friendliness ranked low on their list of priorities.

“I absolutely think that if we have more efficient homes, that’s a better value proposition for our residents,” says Bryan Smith, the company’s chief operating officer. Yet the abstract promise of efficiency isn’t likely to get a new tenant to sign a lease the way a good school district or home office might. It’s more likely to persuade a current tenant to stay longer, Smith says: “If the rent’s $1,000 and I tell you I can save you $50 on utilities, I don’t know what you would pay me for that. But it’s not $50.”

American Homes has other reasons to pursue efficiency. It appeals to some stock market investors and helps the company access marginally better financing terms. Maybe more important, the company and its peers would like to change how they’re perceived.

American Homes isn’t the only rental house company embracing ESG. Landlords have started programs to help tenants eventually buy the homes they live in and are seeking to build more sustainable dwellings. Some have already lapped American Homes on efficiency and clean energy: UK investing giant Man Group Plc is building 1,000 net-zero rental homes across the US with backing from investors in Germany and the Netherlands. A US developer owned by Singapore’s Alset International has begun outfitting Texas rental homes with Tesla Powerwalls, according to a recent filing with the Securities and Exchange Commission. And Toronto-based Tricon Residential Inc. is developing roughly 1,200 rental houses in California that will be equipped with solar panels.

At the same time, solar panels and other green features can only do so much. Builders developing entry-level homes—whether for rent or for sale—tend to operate at the far reaches of suburban sprawl, building low-density communities where getting around by foot, bike, or mass transit is difficult if not impossible.

Transportation represented 37% of carbon dioxide emissions from US energy consumption in 2021. In the suburbs, “the emissions coming from transportation is driving climate change more than the individual homes,” says Ellen Dunham-Jones, who teaches urban design at the Georgia Institute of Technology. American Homes is building somewhat denser communities than many for-sale builders, with roughly eight lots per acre, but these are still designed around cars. “They’re still putting the garages right up front,” notes Dunham-Jones.

What if the cars in those garages were cleaner, at least? The landlord is adding electric vehicle charging stations to its community centers and says it’s wiring houses to accommodate chargers, but is counting on renters to bring their own. For now the company is sticking with baby steps.

To contact the author of this story: Patrick Clark in New York at [email protected]