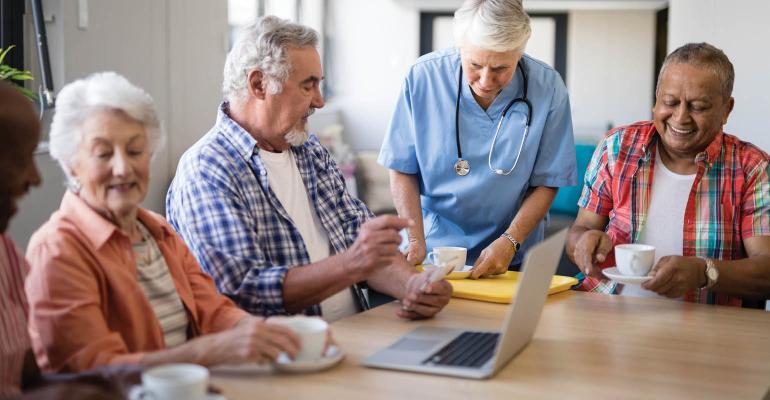 Occupancy rate for assisted living properties has ticked up from recent lows.

“Oversupply continues to plague the senior housing industry. The bad news is the supply is still elevated,” says Lukas Hartwich, lead senior housing analyst at Green Street Advisors, a real estate research firm based in Newport Beach, Calif. “The good news is that the pipeline has been steadily shrinking, which suggest headwinds from new supply will continue to ease over the next couple years.”

Markets seeing an outsized share of new construction include Atlanta, Orlando, Fla., Phoenix, Dallas-Fort Worth, Washington D.C. and Richmond, Va. Most of these cities are expected to experience an above average growth in the residents aged 55 and older, according to Kevin Cody, senior consultant at research firm the CoStar Group.

“I would say you’re seeing a deceleration in assisted living [construction],” says Beth Burnham Mace, chief economist with the NIC. “And when I look at independent living, the 6.2 percent is high.”

The seniors housing occupancy rate in the third quarter averaged 88 percent, just one percentage point above the all-time low for the sector seen in the first quarter of 2010.This occupancy rate is up from 87.7 percent in the second quarter of 2019, which was the lowest level in eight years, according to Mace.

These dynamics have to do with the amount of new supply that’s coming on-line in different sectors of the seniors housing universe, according to Mace. “There’s been more development in assisted living then there has been for independent living,” she says.

Mace pegs the over-supply in the assisted living sector to the post-recession period, when investors considered the asset class as “more recession-resilient,” which caused more development.

“[The occupancy rate in independent living] fluctuated, but it hasn’t moved tremendously. Going forward, I would expect it to say close to that rate of 90.2 percent, so that demand and supply will largely offset each other,” she says. “In the case of assisted living, I’m anticipating we’ve hit bottom. When I look ahead, I would expect demand to remain relatively strong, supported by the ongoing, albeit slightly slower, growth of the economy. Also, inventory growth is decelerating, so that should support occupancy.”

The baby boomer generation currently drives most of the demand for seniors housing in the independent living category. Still, Cody says seniors housing developers should consider the 55- to 64-year-old age group as well, as “there is a potential sign of upside for that age group as their homeownership rate has fallen by 3.9 percent since 2010, meaning a higher share [of them] is renting.”