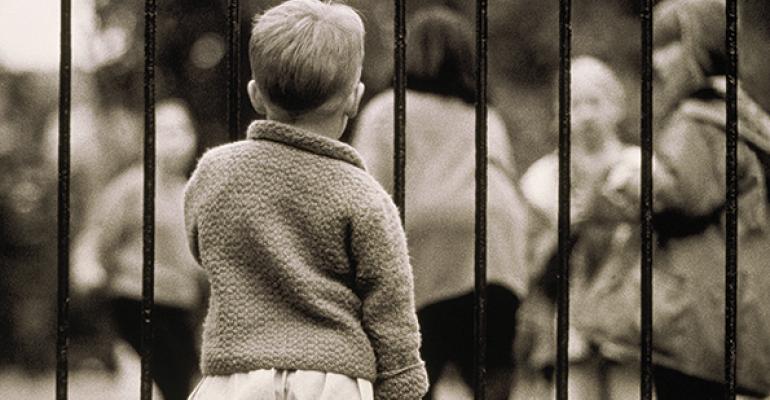 The ‘big tent’ philosophy of some custodians is getting smaller, and some small RIAs are getting squeezed out

When David Allred went looking for a custodian about three years ago for his modest practice in Covington, Ga., Scottrade Advisor Services seemed to be just what he needed. Allred, who chiefly sold annuities and other insurance products, had just 40 clients and $3 million in assets. The RIA arm of the national discount brokerage required no minimum assets of its advisors, his contacts at the brokerage were responsive and could easily handle the ETF trades and other transactions he needed. All was well.

That all changed in August when he received an email from Scotttrade telling him he was cut off.

The email read: “Dear advisor, Scottrade Advisors recently completed a review of advisor relationships to better understand how advisors are leveraging our services. The advisor platform is designed to support the trading and custody needs of advisors actively growing and serving the client base. Our records show you’ve maintained a relatively low client base and have had little or no activity. As a result, we will no longer be providing you custody and trading services. We ask that you transfer your personal and client accounts to a custodian that can better serve your needs.”

It was a surprise to Allred because to him, the custodian supported the impression that asset size didn’t matter. “They sent a message saying, ‘Come on board, we’ve got a home for you,’” he says. “And then once the house filled up, they started throwing all the ugly ones out and kept all the pretty ones.”

Allred wasn’t the only one to be sent packing. Scottrade won’t comment on the number of advisors it culled last summer, but other custodians say they’ve seen a sharp increase in the number of former Scottrade advisors who are now looking for a new home.  Brian Stimpfl, Scottrade’s senior vice president of Program Strategy and Operations, said the firm has no stated minimums but evaluates prospective RIA clients on a range of factors, including the strength of their business plan and their growth strategies.

For FAs whose practices tend to languish, it’s a fresh chapter in a familiar story.

Businesses with low assets often are the least popular guests at the custodian party, a party that is getting more exclusive. A year ago Fidelity Institutional Wealth Services announced it would charge a platform fee of $2,500 each quarter to certain advisors with assets below $15 million, up from below $10 million previously. Executive Vice President Bob Oros, who leads RIA sales at Fidelity, called it a modest move that resulted in a “very nominal amount of attrition.”

“We’re focused less on the assets, more on whether folks are committed to be in this business, serving consumers under a sustainable structure,” he said.

Are the days of the low-asset advisor numbered? Their numbers appear to be shrinking—just 7.7 percent of SEC-registered advisors last year held assets of less than $25 million, down from 8.1 percent in 2012, according to the Investment Adviser Association.

Custodians themselves are under pressure, which may be why they have less tolerance for smaller practices. Low interest rates in recent years have reduced revenue that the firms’ cash balances can generate, and competition is sending trading charges steadily downward. And advisor hunger for more sophisticated services is growing.

“Serving RIAs has become more involved,” says Alois Pirker, research director at Aite Group in Boston. “Certainly technology is more important. They’re investing a lot more money in practice management, to make sure the advisor has a productive environment. And the advisors are demanding more. As soon as you start investing in your platform, you need to get a return on that.”

So rising custodial business costs are putting more downward pressure on revenue per dollar of assets. Custodians are starting to take a page from the playbooks of the financial advisors themselves, who are often counseled to segment their client list, providing greater service to those investors who are generating higher revenue and scaling back on those smaller investors who offer lesser returns. Since it takes as much time to service a low-asset advisor as it does one with $100 million in AUM, the economics don’t bode well for the smaller advisor.

Get Bigger or Get Out?

For advisors who by choice are running more laid-back practices—getting by with a handful of choice clients who produce just enough revenue to generate some modest retirement or part-time income—the handwriting may be on the wall.

“Advisors need to think about whether this is more of a lifestyle business for them or a true, genuine business, because it’s no longer a cottage industry,” says Tom O’Shea, associate director at Cerulli Associates. “There are RIAs out there that manage billions of dollars, and they demand a certain level of support. And the custodians have to respond to that. They need to segment their business in order to do it, which means the smaller advisors, unless they want to grow with the industry, are going to continually bump up against this issue.”

Even custodians that promote themselves as small-advisor friendly add similar caveats. TD Ameritrade Institutional, with 4,500 RIAs on its platform, has no stated asset minimums and no platform fees, but that doesn’t mean that everyone is welcome under their tent, says Pete Dorsey, managing director, institutional sales.

“I wouldn’t say you’re guaranteed entrance to the platform. And the way we can keep the platform free of fees is by continuing to stick to our strategy of bringing on the right type of firms,” Dorsey says. “We don’t want people doing this part-time or quarter-time. We’re looking for people who are dedicated to doing this as their full-time profession and have a desire to help the investing public.”

That sentiment prevails at Trade-PMR, a Gainesville, Fla.-based custodian that services about 1,500 RIAs and also markets itself as having no minimum asset requirements. Executive Vice President Frederick Van Den Abbeel says his firm got 200 to 300 inquiries last summer from outgoing Scottrade advisors, and 50 signed on with his firm. Trade-PMR will take on advisors with no assets at all, but there are still expectations of growth, Van Den Abbeel says—such FAs would need to get to at least $1 million in six months.

“You have to show us some level of success in your business. The reason some of the better custodians impose such requirements is they’re not looking to work with advisors that are doing this like a hobby,” Van Den Abbeel says. “For the ones that aren’t imposing any kind of goal, I don’t know how they deal with their profitability issues.”

Allred, who is exploring a merger with another practice and looking over other platforms, says that the exigencies of the business are little comfort when small RIAs like his are being squeezed.

“We weren’t generating trades for them, and I wasn’t bringing over a whole lot of new accounts every day. These wirehouses want activity. They’re interested in revenue, and my clients weren’t bringing in revenue, or enough revenue to justify them,” he says. “I’m disappointed. It was a great ride while it lasted.”