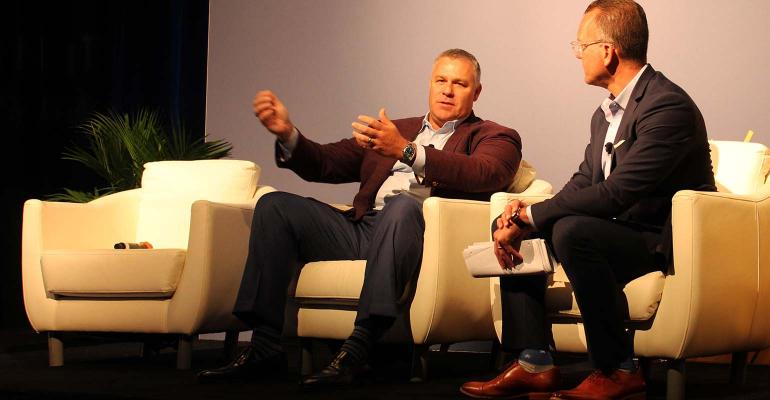 Sanctuary Wealth CEO Jim Dickson talks about what he sees in the RIA M&A landscape, what he looks for in an acquisition target and where he thinks the industry is headed.

CEO Jim Dickson started Sanctuary Wealth as a destination for breakaway wirehouse financial advisors only four years ago. In November 2020, an infusion of private equity capital enabled Sanctuary to embark on an inorganic growth strategy in earnest, and today Dickson’s registered investment advisory platform has a presence in 25 states with almost $25 billion in assets.

Dickson sat down with Informa’s Mark Bruno during the recent RIA EDGE conference at The Diplomat Beach Resort in Hollywood, Fla., to talk about what he sees from sellers in the RIA space, as well as what he looks for when scouting desirable acquisitions.

More firms are becoming like family offices and offering additional services, said Dickson, while many industry leaders are also nearing the age of retirement. “A lot of that goes to the dynamic of where baby boomers are and how big they are,” he said. “It’s just where we are as an industry.”

Joining a larger firm or platform that can take on back- and middle-office tasks, providing support with everything from marketing and staffing to compliance and custody, enables advisors to spend more time with clients and reach out to new prospects. In many cases, he said, a sale can solve for succession problems, enabling advisors to offload some of their responsibilities and remain with the firm while giving them extra time with grandchildren or on the golf course.

"The best advisors that we see and meet with in M&A,” said Dickson, view their clients as family and are “really, really, really picky” when looking for a firm or an investor that will continue serving those clients into the future.

“We like it when they care that much,” he said. If a seller’s primary concern is “negative consent” from clients, he added, “you better run the other way.”

Yet Dickson warned that assessing a firm’s value by growth alone can be tricky. “Understanding that there’s a premium for true organic growth versus market growth, I think, is one of the hardest things for people that are getting into the seller’s market right now. There seems to be a little bit of a disconnect,” he said.

“In their mind, they’re growing because their EBITDA is going up. Their revenue is up every year. But they’re not really growing, the market is,” he said.

Dickson said valuation multiples have likely reached a peak, but he doesn’t see market forces dragging them down in any significant way­—even for firms with nothing special to offer.

A recent bid Sanctuary had put in on a firm that he said “was great, but I would say everything about them was sort of right in bounds,” didn’t even make it to the second round before another buyer stepped in with a much larger offer.

“It was quite eye-opening,” Dickson said of the multiple paid by the company that ultimately won the sale. “I’m not sure I would have done that, personally, but it tells you it’s still there.”

Traits specifically sought by Sanctuary include a niche expertise, youth, diversity and an ability to communicate well with clients—­all of which he said are scarce qualities yet enable continued organic growth and are worth paying top dollar for.

Firms with digital marketing expertise, in particular, are “really hard to find,” Dickson said, and Sanctuary is willing to pay “a huge premium” to bring those firms onto its platform because they have the ability to continue growing organically in a tech-driven market. But, he stressed, youth and an affinity for social media don’t make up for an inability to communicate.

“When you find a younger, talented advisor that can communicate well,” he said, “I don’t want to call them a unicorn, but they’re rare. And so there’s great value in that.”

Dickson said he believes the scarcity of next-gen talent is short-lived and that when the aftershocks of the 2008 financial crisis finally fade, young people will be drawn back by the industry’s growth and potential.

“It’s an unbelievable opportunity,” he said. “The average advisor is 60 years old. If you can stay in the business and do a great job for the next 15 years, the amount of assets you’re going to have to manage are probably going to quadruple compared to today. I think that’s going to attract a lot of talent.”

“I sort of feel like our industry is changing from a spreadsheet exercise to a human potential exercise,” Dickson said. “And a lot more of the M&A is about talent and longevity and the ability to serve that future.

“Because it’s rare, it’s hard to find. And when you find it, you’re willing to pay for it.”