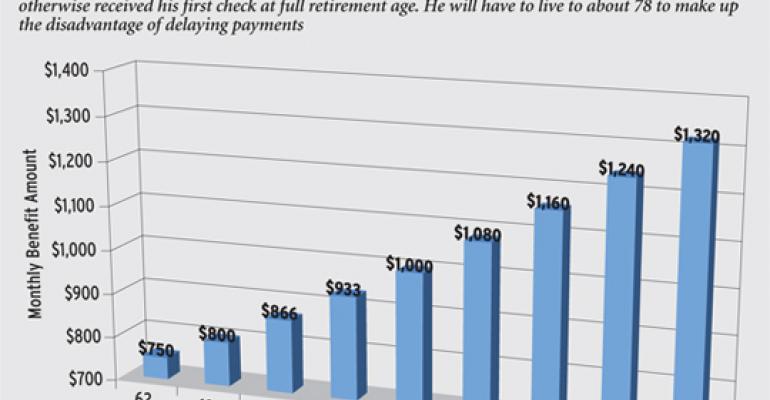 Take the Money and Run

In the current environment, it might make more sense for your clients to take Social Security payments sooner rather than later

Knowledgeable financial advisors usually recommend that clients postpone taking Social Security payments for as long as possible, pointing out that the eventual monthly checks will be higher, and the chance of those delayed checks being taxed or penalized will be lower.

In the process, the advisor usually faces objections from retirees who are concerned about either their personal longevity, or that of the Social Security program — or both.

In these desperate times, such objections make a lot of sense. You may want to start encouraging retirees who are in dire need of income to start taking Social Security today, instead of tomorrow. Here are five reasons why.

The actual cost of taking the payments now instead of later will be determined by many future variables, including interest rates, tax rates, investment returns, and how long the recipient lives.

But if your client takes Social Security this year, and later discovers that it would have been more advantageous to wait, he has a little-known way to correct his mistake.

By filing Form 521 (Request for Withdrawal Application) with the Social Security office, and repaying the benefits already received, your client can re-start a new, higher monthly payment stream (because it's based on the client's new, advanced age).

You can help your clients estimate their current benefits (as well as the break-even point for delaying benefits) by using the calculators available at www.ssa.gov.

Assuming they prefer today's smaller check in hand to a larger one in the future, there are a couple of actions you should take to maximize their net payout.

First, make sure that you minimize the likelihood of their benefits being subject to income tax by realizing any taxable events (like selling an asset with capital gains or converting an IRA to a Roth IRA) in the year before initiating payments.

Then, if the clients are under full retirement age and still working, make sure they pay close attention to the limits on income that can be earned before benefits are reduced.

Finally, if your clients are married, you may want to consider whether both spouses should begin taking benefits, or if just one's checks will be sufficient.

And if all of this seems like too much work, remember that every dollar of Social Security that you help your clients obtain is a dollar that they won't remove from your assets under management.

Kevin McKinley
CFP© is Principal/Owner of McKinley Money LLC, an independent registered investment advisor. He is also the author of the book Make Your Kid a Millionaire (Simon & Schuster), and provides speaking and consulting services on family financial planning topics. Find out more at www.advisortipsheet.com.