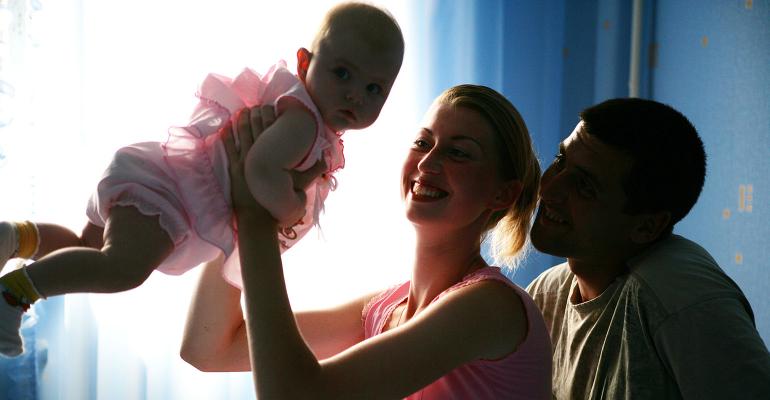 (Bloomberg View) --As you’d expect, the speaker of the House of Representatives and the vice president were seated behind President Donald Trump during the State of the Union address last month, nodding, clapping and rising to their feet. One moment, though, was different.

The State of the Union speech breathed new life into the idea, along with a compelling proposal to fund paid leave without — its advocates claim — burdening employers, reducing job opportunities for women or increasing taxes. The idea is simple and elegant: Allow new parents to collect early Social Security benefits after the arrival of a child, provided that they are willing to delay collecting benefits when they begin their retirement decades into the future.

Consider a 26-year-old new mother with five years of work experience earning $31,100 per year. Under this plan, she could receive 12 weeks of paid leave, at a rate of close to $300 per week. In exchange, she would delay claiming retirement benefits by about six weeks.

This idea is gaining traction. Senator Marco Rubio, the Florida Republican, is working with Ivanka Trump on drafting a bill. Earlier this week, two other Republican senators, Joni Ernst of Iowa and Mike Lee of Utah, discussed the plan in a press call hosted by the Independent Women’s Forum, which first outlined the new approach. Some prominent conservative intellectuals are also getting behind the idea.

To its designers' credit, this is the best federal paid-leave proposal being discussed. My Bloomberg View colleague Ramesh Ponnuru agrees, writing that he hasn’t “seen a better plan.” Its underlying philosophy — that society should invest more in the young and less in retired individuals — is sound.

But it’s still a bad idea.

And one wonders what else Congress might want to finance using future Social Security benefits if a family-leave plan creates that possibility.

Since Social Security is underfunded, the concept of letting people borrow from future benefits is on shaky ground. Social Security will soon pay out more to retirees than it receives in tax revenue and interest income, and its “trust fund” reserve is projected to be exhausted in 2034. By the time today’s new parents reach retirement age, either benefits will have been reduced or taxes will have increased. If the former, it is imprudent to allow new parents to use promised money ahead of schedule, since the anticipated benefits won’t be there in full when they retire. If the latter, then the claims of advocates that their plan doesn’t require tax increases could be misguided.

In addition, the realism and enforceability of the plan are questionable. It would be decades before the first wave of retirees would face reduced benefits because they tapped into Social Security when they welcomed a child. In the interim, Social Security could be significantly changed. In that case, those who received early benefits might not receive reduced benefits upon retirement, undermining the promises of the plan. Or future lawmakers could decide that retirees shouldn’t be “penalized” with lower benefits because they took paid time off. Any policy where the benefits are enjoyed today and the costs aren’t realized for decades should be met with skepticism.

On balance, then, it's best to think of the family-leave plan as another middle-class entitlement program. Given projected federal debt and deficits, another entitlement is something the U.S. does not need, however laudable the goal. (This is especially true in light of the fact that four out of 10 working women already report access to paid time off following the birth of a child.)

Finally, advocates of the plan are quite wrong to suggest that it won’t burden employers. It's true that it wouldn't require employers to finance the leave taken by their workers, but it would impose other significant burdens. Subsidizing time away from work through the Social Security system would increase both the number of parents who take long periods of leave and the weeks of leave new parents take. The increased use of leave would materially disrupt business operations, particularly for smaller firms.

Since women tend to be the main users of parental leave, businesses would probably respond to this disruption by hiring fewer less-educated women of child-bearing age, offering women fewer hours of work per week, and by promoting fewer women into management roles. The costs of paid leave will disperse throughout the labor market, creating invisible victims whose employment opportunities are diminished.

Paid leave has many benefits. But the costs of letting families borrow against Social Security to finance it are too high.

Michael R. Strain is a Bloomberg View columnist. He is director of economic policy studies and resident scholar at the American Enterprise Institute. He is the editor of “The U.S. Labor Market: Questions and Challenges for Public Policy” and the co-editor of “Economic Freedom and Human Flourishing: Perspectives from Political Philosophy.”